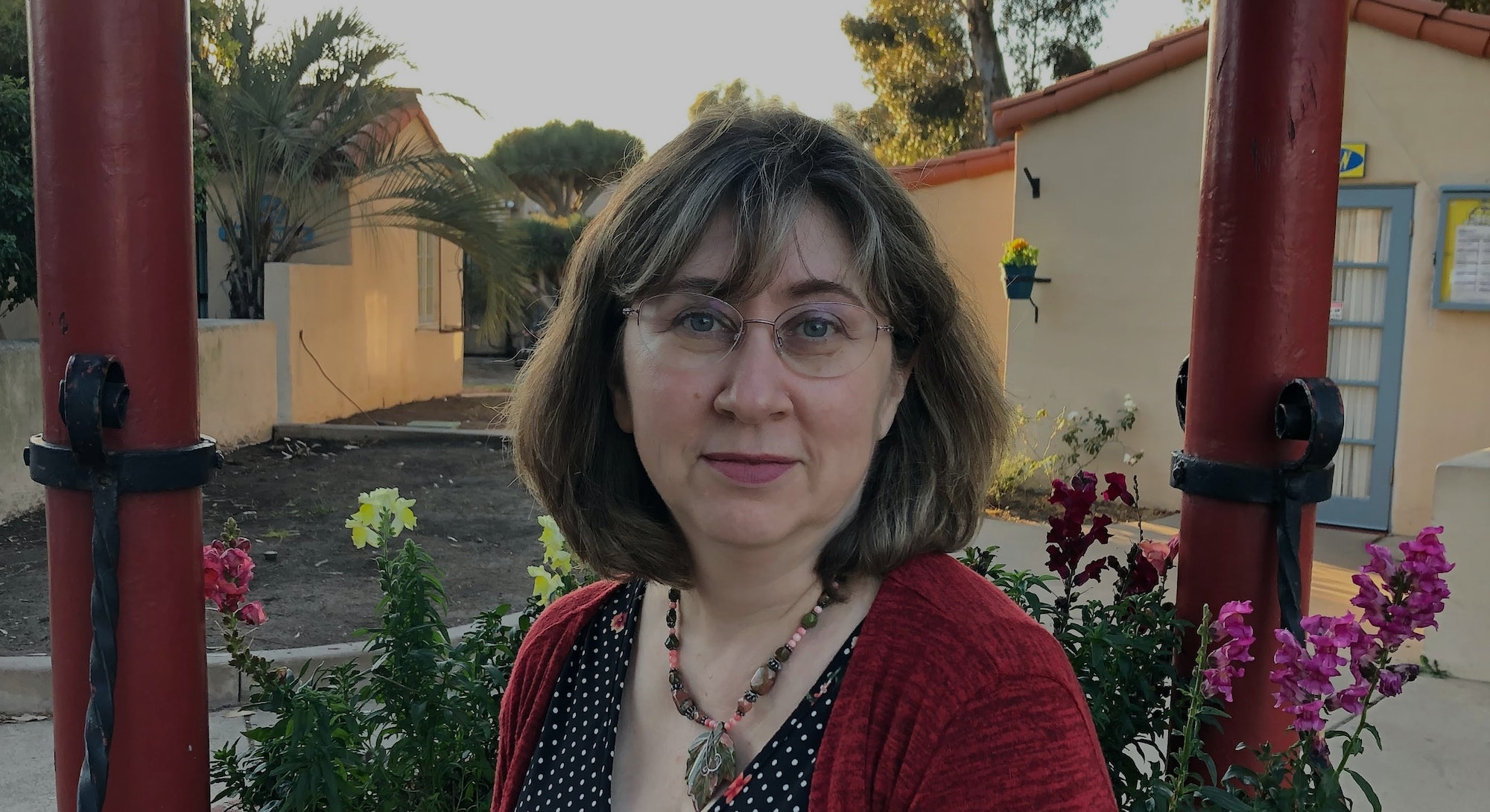 Semen is an antidepressant. Nearly all teenagers are psychopaths. Childhood trauma can cause certain face wrinkles.

These are just a few claims Dr. Inna Kanevsky — known as Dr. Inna (@dr_inna) to her nearly 915,000 TikTok followers — has debunked on her account, which is dedicated to educating the masses about what psychology really is, and is not, about.

Kanevsky, who teaches psychology at San Diego Mesa College, isn’t your typical online celebrity. She comes from an educational background, speaks matter-of-factly in a Russian accent, and is a member of the Society for Creative Anachronism, an organization dedicated to researching and recreating the Middle Ages and the Renaissance.

She is wise, but don’t call her an old lady or a grandmother, because she will fact check that, too. Kanevsky doesn’t turn 50 until later this year; she has a son who’s a high school senior and a 20-year-old daughter, but no grandkids. (Kanevsky likes to wear science-themed clothing and cheeky graphic tees, including a self-referential one that reads “Having a weird mom builds character.”)

It was actually Kanevsky’s daughter, Rachel Fay (who just goes by Fay), who got her into TikTok in the first place. In the summer of 2019, Fay was creating TikToks in which they cosplayed the cartoon character Ms. Frizzle and led a discussion on sex and gender. Fay asked their mom to help make a bibliography for their TikTok videos, so users could better understand where Fay got their information. “At that point I already had an account to watch videos, and Fay’s videos, of course,” Kanevsky says. “And Fay told me I should start making content.”

As the pandemic began in 2020, Kanevsky’s role at San Diego Mesa College shifted online. “I don’t like doing video lectures because nobody watches them,” Kanevsky says. “I thought if I made one-minute videos just to show a concept or illustrate something, and then use music, students may be actually willing to watch that.” To better aid her students, Kanevsky would post simplified explanations of class concepts on TikTok, utilizing trending songs or dances to make the experience fun and relatable.

Within a few months, Kanevsky began debunking other creators’ claims on the app. These videos spread beyond her small following, reaching skeptics, other intellectuals, and most notably, new fans. Seemingly overnight, Kanevsy saw a massive influx of followers flocking to her page in search of a fact-check, an educational skit, or sometimes even a fight.

Whether Kanevsky was debunking the psychology behind videos with titles like “scientifically proven ways to be more attractive” or rolling her eyes at more ridiculous claims like “how kinks are hereditary,” her TikToks weren’t just educational, but entertaining. By now, she says, her kids, who live at home, “are used to me running around and changing outfits to dress up” as internet trolls, psychology icons, or in some cases, the mood-stabilizing hormone serotonin.

As Kanevsky grew more of a following, fellow TikTok users began tagging her in psychology-related videos, asking her to react or review the content. Being an educator, Kanevsky was happy to see interest in psychology, but she points out — quoting Voltaire, or Spider-Man, depending on whom you ask — “with great power comes great responsibility.”

TikTok hosts billions of videos from all perspectives, and there are millions of impressionable viewers to watch them — a quarter of all TikTok users are aged 10 to 19. False information can be created, consumed, and circulated all in a matter of minutes. Users are more likely to come across a video promoting psychology myths than they are one by Kanevsky debunking them.

For this reason, Kanevsky says she feels “kind of obligated” to create more content. “There’s no contract or deliverables or anything due,” she says of TikTok. “But I see my videos, and replying to comments, as education.” Like any good teacher, Kanevsky doesn’t want to leave any student hanging.

“I feel like the more people that listen to me, the more it’s on me to provide correct and accurate information,” she says. To her, misinformation is not only damaging to individuals, but to the “credibility of psychology as a field.”

Of course, this being the internet, not all of Kanevsky’s feedback is appreciated. Some TikTok users block her or fill her comment sections with accusations that she’s just seeking attention or being patronizing. “You’re wrong when the evidence says you’re wrong,” Kanevsky says. “I’ve tried to be nicer, but when I speak that way, people think I’m being condescending. I don’t know how to win.”

Even Kanevsky’s husband, a software engineer, suggested she strike a different tone on the app, particularly in a video directed at television personality Dr. Phil. “If you want Dr. Phil to listen to you, you should be a little nicer,” she says her husband told her. But, she points out, “Dr. Phil is not a respected psychologist.” She did end up making a “nicer” post, but doesn’t know what it accomplished. “Dr. Phil probably didn’t even notice me,” she says.

While many of Kanevsky’s fans tell her to “ignore the haters,” she says there is a particular kind of vitriol that she and Fay experience on the platform far too frequently: anti-Semitism. “I don’t ignore things like that,” Kanevsky says. “Because of my history, I’m well aware of what happens when we do ignore it.”

Kanevsky’s TikTok bio identifies her as Jewish and a Russian-speaking ex-Soviet refugee. “My background affects so much of how and what I do in teaching and on TikTok,” she says.

Growing up in the southern Ukranian city of Nikolayev — now called Mykolaiv — Kanevsky primarily spoke Russian, with a bit of Ukrainian. She recalls her grandparents speaking Yiddish, but laments she was never able to learn the language. “I was an outspoken child growing up,” she says. Since the Ukraine was under Soviet occupation, she adds, “it was not good for me to be recognized as Jewish.”

Kanevsky recalls an incident that took place when she was five or six that made this fact hit home. “My girlfriends and I were going in a circle talking about our ethnicity groups,” she remembers. “They went around saying ‘Russian,’ ‘Russian,’ ‘Ukranian,’ ‘Russian’ — and when it got to me, I said ‘Jewish.’ I said it because I knew that’s what my documents said.” After that, a close friend told her, “My mom said this man wrote a book that says Jewish people are bad people.” This upset young Kanevsky: “I didn’t want to let others define who I am.”

So Kanevsky paved a path for herself. In 1994, she came to the U.S., and began the master’s program at California State University, Los Angeles, the next year. In 2005, Kanevsky was offered what she calls her “dream job” at San Diego Mesa College, teaching psychology within the college’s behavioral science program.

“I work at a community college because myself and my colleagues had more interest in the teaching aspect of our profession than the research aspect,” she says. “But my position doesn’t mean I’m less qualified to know my subject, or that I gave up on the academic sense of psychology.”

Fay’s account, @faythegay, boasts 1.4 million followers. They post all sorts of videos, including activist ones, but what really grew their account — from 60,000 to around 300,000 in a matter of days — was their impressions of Ms. Frizzle, the protagonist of the ’90s animated series The Magic School Bus. “People also follow me from my mom’s account, and vice versa,” Fay says. “When people find out we’re related, it kind of makes people’s heads explode.”

Many of their mother-daughter conversations revolve around TikTok — including ones in which they bounce video ideas off each other. “We help each other through everything,” Fay says. “We also have signs on each of our doors for when we’re recording,” Kanevsky adds, though both of them have walked in on each other filming videos.

Fay and their mother “have a really close relationship,” Fay says. “Because of how my mom grew up, she’s supportive of whatever I do.” Fay remembers attending everything from karate classes to medieval reenactment fairs growing up. They say their mother “speaks her mind and stands up for what she thinks is right” — both as a parent and on her TikTok account. “I think having me as a child, and creating a safe space for me, has helped her do the same on TikTok,” they add.

Kanevsky is one of the TikTokers fiercely fighting against the “super straight” movement, whose adherents say they’re only attracted to members of the opposite sex, excluding members of the trans community. “Frankly, it’s hate speech, and transphobic,” Kanevsky says, adding that a few of her videos mentioning the super straight movement were removed by TikTok due to mass reporting (presumably by those who disagreed with her).

Kanevsky has dedicated her account to speaking up against hate — a dedication that surely stems from her early life in Nikolayev. She says she wants to “use her platform to give marginalized people a voice,” taking care not to speak over them but instead amplify what they have to say. “It’s not just me that’s doing it,” Dr. Kanevsky says. She points to a few other creators — Sean Szolek-Van Valkenburgh and Sarah Hester Ross among them — looking to debunk misinformation and create a sanctuary for others on TikTok.

Kanevsky knows she can’t combat all the misinformation on TikTok — there’s just too much of it, spreading too fast. But her role, she says, is creating a “small change.” Kanvesky wants her audience to start questioning what they see, and not accept everything as fact. “If I’m in a position to question something, then I’m going to question something,” she says. “I’m teaching my audience to do the same thing.”