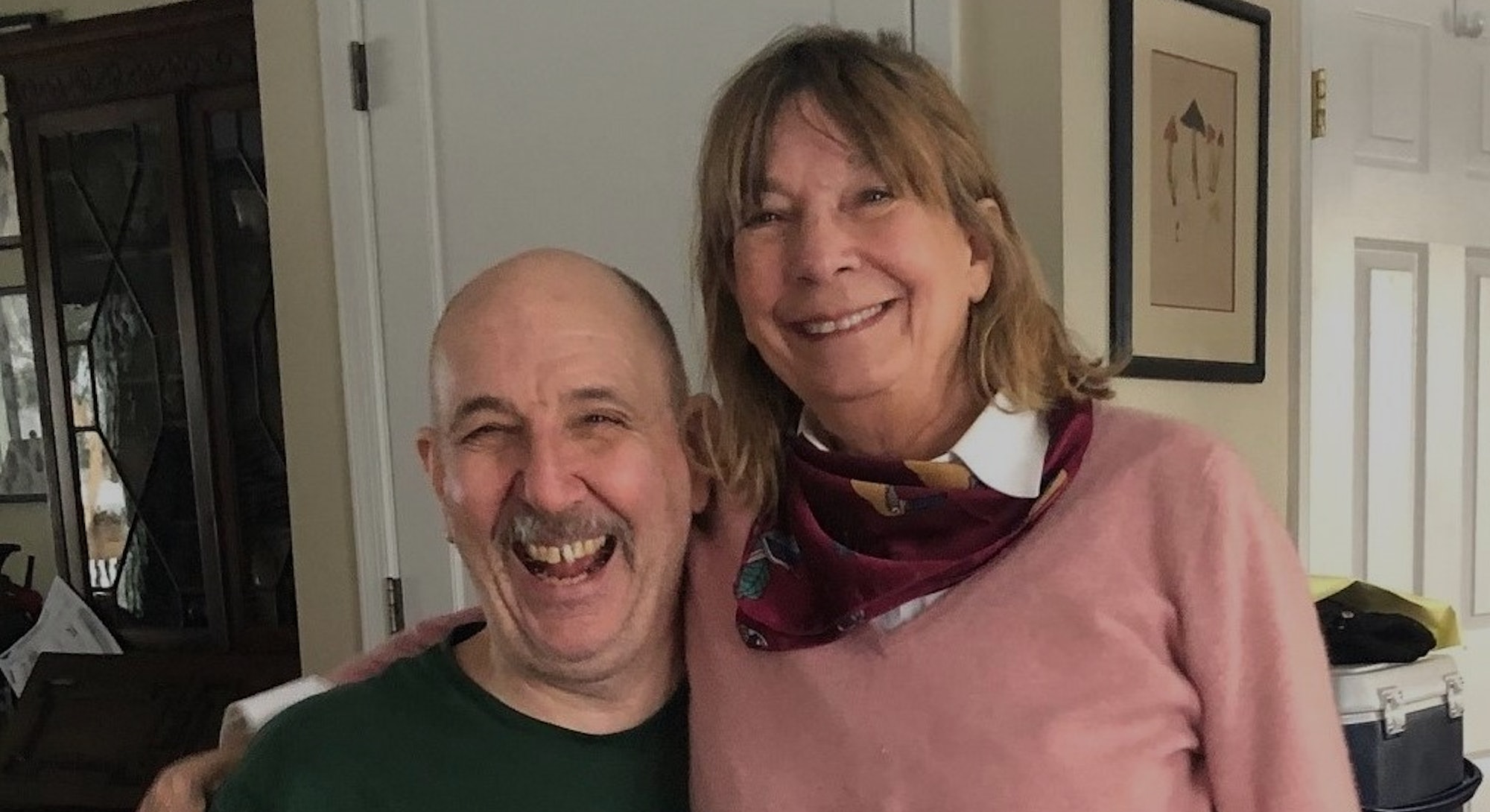 Just a few months ago, 61-year-old Craig Cesal was in prison in Indiana on a marijuana charge, serving a life sentence without the opportunity for parole.

When he was first arrested in the early 2000s, Cesal ran a business in Chicago that fixed trucks for a company in Florida. “They said since I knew some of the drivers were trafficking marijuana that it made me part of their marijuana conspiracy,” Cesal says.

On 4/20, Craig will be on a fishing trip in West Palm Beach with a group of other marijuana offenders who’ve managed to have their sentences reduced. “There’s a cannabis company that’s paying to fly a bunch of us former pot lifers down,” Cesal says. “Of course, Beth is going down, because we all have ties to her.”

The “Beth” he’s referring to is 79-year-old Beth Curtis from Zanesville, Ohio, the founder of LifeforPot.com, an amateurish little site she built in 2009 to raise awareness about people like Craig — or more specifically, people like her brother, John Knock, who was sentenced to two life terms plus 20 years for a first-time nonviolent marijuana-only offense. Beth has spent more than a decade aggressively advocating for federal clemency on Knock’s and others’ behalf, earning her the nickname the Mother Teresa of Pot Prisoners.

Curtis hoped that by giving people like her brother a presence on the internet, her website would help to raise public awareness about an aspect of criminal justice sentencing most people didn’t seem to know about. “When I talked about somebody serving life for marijuana, honestly people didn’t believe it,” she says. “They’d think, ‘There has to be a dead body somewhere.’ Indeed, there do not have to be any dead bodies, or even a gun.”

The site also helped her find more pot lifers. “A family member would find it and say, ‘I think maybe my brother would fit up here,’” Curtis says. Cesal found his way to Curtis when a friend of his from high school found her site and sent him Curtis’ address.

When I ask Curtis if she built the site herself, she laughs out loud. “Yes, can’t you tell?” she replies. Clunky as it is, the current version is much improved from the original, which she built using “CafePress or something” and became a running joke among her friends. When an article in the Miami New Times mentioned her “scrappy-looking site,” fellow clemency advocate Dennis Cauchon called her and said “You know, ‘scrappy’ rhymes with something,” she relates. “And that’s indeed true,” she adds.

Crappiness aside, the site’s been effective. Of the 39 people featured on Life for Pot, 24 have been granted clemency or compassionate release — including, most recently, Knock, who was granted clemency by President Trump in January.

“She did it,” Knock, 73, says of his sister. “One little lady, barely five feet tall, and she just kept pushing and pushing and pushing.” For someone as driven as Curtis, failure was not an option: “I couldn’t imagine that I would die while he was still confined behind bars. The thought sickened me.”

Curtis was living with her since-deceased husband in Ohio when Knock was first charged in 1994. The youngest of her three sons had left for college, and she spent her free time playing tennis and golf, and going out to lunch with friends. “I had a pretty nice life,” she says.

The indictment shocked her. John had spent most of his adult life in the Bay Area, but he had always stayed in touch with family, and Beth wasn’t aware of his involvement in the marijuana trade. “John had a fertilizer business, and he had a plastic-extruding business that made — this was the tip-off, maybe — containers for growing vegetables. That’s what he said.”

According to Knock, he left the marijuana business in the late 1980s and then moved to Hawaii, where he cared for his young son while his wife pursued a PhD. “He would hang on to my finger, and we’d go fishing together,” Knock recalls. “It was the most enjoyable time in my life.” But the group he’d been a part of got tripped up by authorities in 1993, so he fled the country, leaving his wife and then three-year-old son behind.

Knock was arrested in France in 1996, and spent three years in a French prison fighting extradition to the U.S. In 1999, the French government extradited him, and he spent a year in an isolation jail in Florida before being transferred to a federal holding facility to await trial. He was convicted of conspiracy to import and distribute marijuana and money laundering in 2000, and sentenced early the next year.

Beth was expecting the draconian sentence, but hoped it would be reduced on appeal and was devastated when it wasn’t. “I couldn’t accept the fact that he would die in prison,” she says. “It was just unfathomable to me, which is why I kept going after the appeals stopped.”

As Knock’s appeals were coming to a close, Curtis started seeking out other marijuana offenders serving life sentences. “I just couldn't believe that anybody would get a sentence like that for a nonviolent marijuana offense,” she says. “And I wanted to find out who did.” Public records did not make them easy to find. Even today, Beth can’t say for sure how many nonviolent offenders in the federal corrections system are serving life sentences just for pot.

Beth poured through marijuana cases one by one, looking for people who fit John’s profile and wrote to them, asking them to fill out a questionnaire about their cases so that she could feature them on her site. “Some of them were very suspicious, and I had to write to them a lot,” Beth says. Since-freed prisoner Michael Pelletier, for one, was particularly skeptical, and it took several back-and-forths before Curtis won him over. “I get it,” he finally wrote back. “You’re like my mom.”

“She kept fighting for me, and, goddamn, it worked.”

Curtis also contacted Paul Free, who lives in Mexico now. It was sometime in the late 2000s — he can’t remember exactly — and he had spent the previous 15 years fighting his conviction through the courts to no avail. Back then, Free got letters from civilians all the time. “Most of them just were fly-by-night,” he says. “Here one day and gone the next. But she stayed with me.”

He started emailing her every day, and the two spoke on the phone for 15 minutes at least once a week for 10 years. “She kept fighting for me, and, goddamn, it worked,” he says. “Here I am, sitting in a restaurant in Cabo San Lucas right now with a nice, beautiful cup of coffee.”

By 2011, states like California and Washington had legalized marijuana for medical reasons, and there was talk of states legalizing its recreational use. Recognizing the shift in public policy and opinion, Beth convinced Knock’s trial attorney, the late marijuana decriminalization advocate Michael J. Kennedy, and his counsel, David Holland, to file a group petition for clemency on behalf of five elderly, nonviolent, first-time offenders featured on her site.

A typical petition will go through seven levels of review before it ever reaches the president’s desk, which means that the vast majority of clemency applicants never make it there. “To say it’s a longshot would be overly optimistic,” says David Holland, the executive legal director of Empire State NORML and co-founder and president of the New York City Cannabis Industry Association.

“I’ve been an incessant nag for many years.”

The group petition was a departure from the usual process. “It was denied practically within an hour,” Curtis says. Still, it garnered some publicity, and Curtis began advocating more aggressively. “I started networking with anybody I could who would be helpful, and a lot of people were.” Legions of other groups, organizations, and advocates have profiled and supported people featured on the Life for Pot site over the years.

In 2013, human rights researcher Jennifer Turner featured Knock and Cesal in an extensive ACLU report that chronicled the thousands of people serving life sentences without the opportunity for parole for nonviolent offenses in the U.S. “That gave us exposure to a lot of advocacy groups that backed us up,” Cesal says.

Momentum for clemency swelled in President Obama’s second term. He granted clemency to many of the offenders on Curtis’ site, including Paul Free, but not all of them — and not Knock.

By January 18 of this year, Curtis was pretty sure Knock’s petition had made it to the president’s desk, but she’d heard rumors like that before, so she stayed up until 1:30 in the morning waiting to lay eyes on the official list. Sure enough, Knock’s name was on it, along with seven others on the Life for Pot site. “It was wonderful,” she says, “It’s too overwhelming for me to really give you any idea what it’s like.”

Curtis is adamant that she can’t take sole credit for Knock’s or anyone else’s clemency: “No one’s gotten out just because of one person or one organization. It takes a whole bunch.” Others say she’s being modest. “Beth was really the common denominator to all these different facets and stages of progression, because she kept at it,” Holland says. “She just simply was not going to let her brother die in jail.”

Now approaching 80, Curtis is tired. “I’ve been an incessant nag for many years,” she says. “I don’t know how long I can continue — probably not long.” But more marijuana offenders with life sentences, or close to it, are still sitting in federal prisons, along with many others serving shorter sentences. She’d like to see President Biden grant clemency to all nonviolent marijuana offenders in one sweeping motion.

“At this point, with marijuana being legalized, people making billions of dollars, and lobbyists crawling all over the Capitol lobbying for the marijuana industry, I think it’s an outrageous thing that anybody is in federal prison for a nonviolent marijuana offense,” Curtis says. “So I’m not done.” And her crappy little website isn’t going anywhere either.