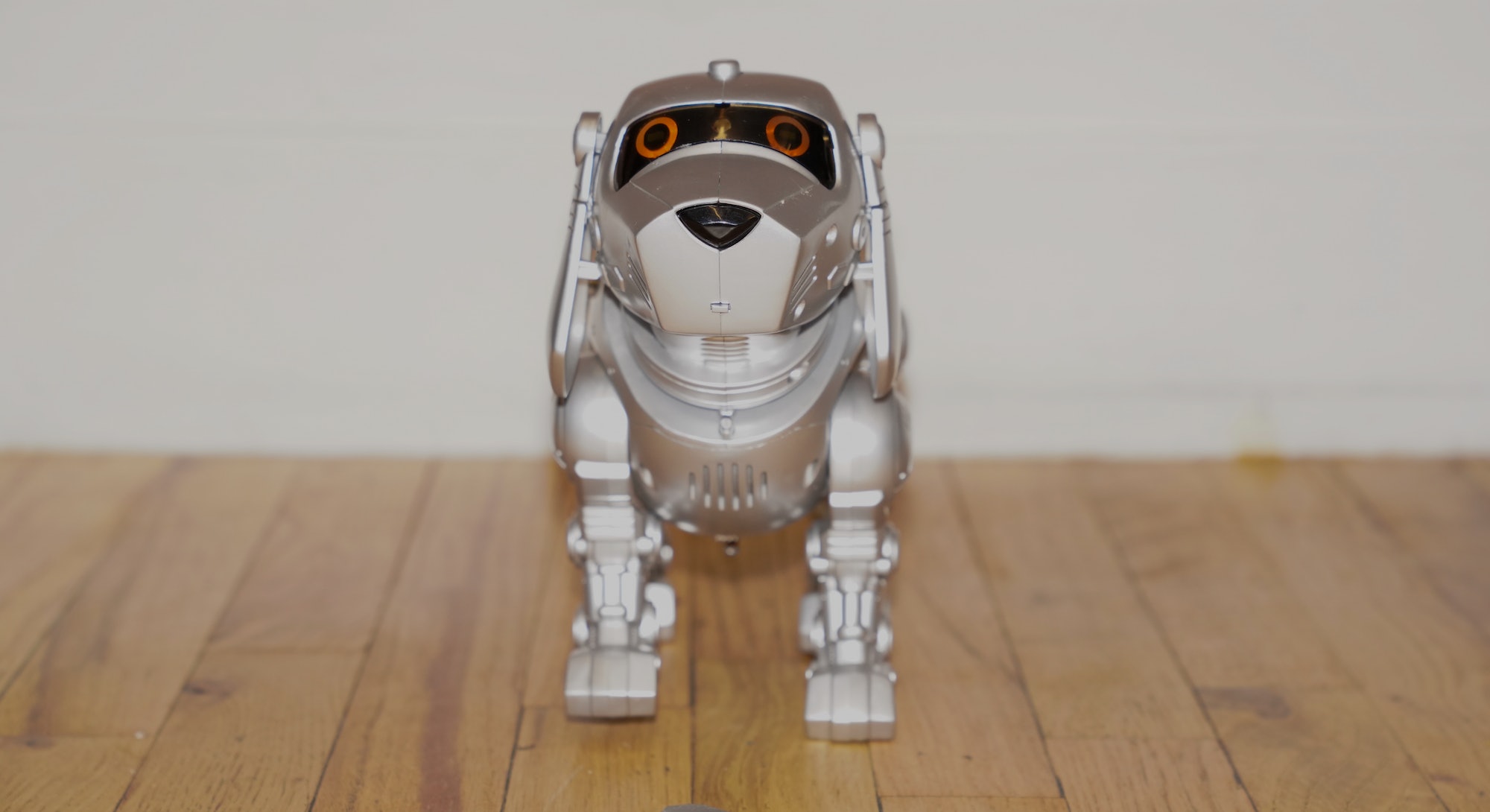 I retraced the lineage of devices I used before my smartphone: the Razr flip, the iPod, the Discman, the Walkman, the Tamagotchi, the robot dog, the Game Boy, the — hold up. I had a robot dog? Somewhere on the Connecticut highway, the memories came rushing back.

I got Tekno the Robotic Puppy as a gift from my mother in 2002, when I was nine. What a sight I must’ve been, a quiet, wide-eyed kid accompanied by this electronic dog with an eerie, tinny bark. I carried his plastic bone so that he never went hungry. I brought him to show and tell and felt sheepish from all the attention we got. As a slowly assimilating first-generation Lebanese-American girl, I didn’t have any friends outside of school. I had my cousins, but I would still wander off alone, in search of the sorts of adventures that always knocked at the doors of the protagonists in all my favorite books. I wondered if people became brave because life’s plot twists forced them into bravery.

These are the sort of things I, a precocious youngster, pondered aloud to Tekno — I never gave him another name — as he became my confidante. He was both dream journal and personal diary, the imaginary black box inside him that stored all my secrets — from which Tom or Nick or Mike I crushed on that week, to my dreams about getting lost in the forest, the sky indigo and all my fingernails gone. I was a walking Harlow experiment, only instead of a wired mom I had a wired best friend.

“Tekno has the intellect of an 8-week-old puppy,” the instruction manual boasted.

My subsequent research showed that a Los Angeles–based company named Toy Quest launched Tekno the Robotic Puppy in 2000. It walked, barked, ate, slept, and mimicked emotions. It could be taught voice and visual commands and was even responsive to its environment. "Tekno uses the latest in artificial intelligence software," the instruction manual boasted. "He has the intellect of an 8-week-old puppy." Tekno got tons of media attention, and sold over 7 million units in its first season alone. And yet, until now, I had somehow completely repressed its entire existence.

As kids, my younger sister and I always asked our parents for a real dog. “Dogs are dirty, and they don’t belong in the house,” they’d reply. After arriving at my parents’ home in Boston, I asked my mother what she remembered about all this. “You did keep asking me for a dog,” she recalled, “but I never considered it for a moment. Pets? That’s not something we do. There are people dying, and you’re talking to me about dogs?”

This is only dramatic if you don’t know about the civil war that took place in Lebanon from 1975 to 1990. Its shadow still lives in the psyche of the diaspora. Every Lebanese family has their stories. There’s the one about my dad’s beloved dog Rin Tin Tin back in Lebanon. When the militias approached my father's village, Rin Tin Tin would alert the neighborhood. So one night, the militiamen crushed glass into the dog’s food. My grandfather found Rin Tin Tin bleeding out on his doorstep. That was 1982, but my family tells the story like it happened last week. I’m always reminded of the Lebanese-American poet Hayan Charara’s poem “Animals”:

Which is to say, there are also people.

And I haven’t even begun telling you

what was done to them.

I read this poem to my mother in our kitchen as she chopped parsley, the knife hitting the chopping board at the end of each line. “Yes, exactly,” she told me. “Wartime in the mountains meant we were always in survival mode, and so were the dogs. We had that in common.” As I stirred the simmering mujaddarah, my mother continued telling me about her relationship with dogs. She was nine years old the first time she was jumped by a stray. “To go out and get a dog and spend money on it?” she said. “You had to be well off. And we weren’t. I didn’t love them or hate them, I was just scared of them. I only heard about their violence. I only heard their howls at night.”

I reminded her about her childhood cat, which I also heard about all the time growing up. For a year, my mother and her siblings fed the cat, bathed her, sang to her, confided in her, and put her to bed in an old baby bed. The baby bed was the last straw for my grandmother, who insisted, “Only a baby should be treated like a baby!” To get the cat far enough away that she wouldn’t find her way back, my grandmother put the animal in a trash bag and sent her off with someone who was driving into the city. My mother still believed the cat somehow made its way back to the village eventually. “Or maybe I just wanted to believe,” she admitted.

When I was 10, my mother put my Tekno in a trash bag and whisked him away from me.

Turns out that history repeated itself many years later, when I was 10 years old and my mother put my Tekno in a trash bag and whisked him away from me. I pointed out this parallel to my mother. She looked up from the filo dough she was spreading over a tray. “I hated throwing away your toys,” she said. “They were just in the way, and after a while I needed to pack up what wasn’t essential.” Looking back, I realized that was the year I started playing soccer. I was getting invited to birthday parties. I was speaking up in class. I was showing my writing to people. A fake best friend was definitely less essential.

“I remember that this Tekno dog was trendy,” she continued. “And I like when a toy is not useless. He walked, he barked. I liked his bark. He had eyes, so he had feelings. It was actually so cute. And yes, he wouldn’t shit in my house. I was like, 'That’s it, that’s the closest thing she’s getting to a dog.'” She put the tray in the oven and turned to wash her hands.

“Anyway,” my mom said, “I love dogs now! A lot! But I still don’t like when they lick me.” And it’s true, these days our family has come around to dogs. I often walk in on my grandmother cradling my cousin’s dog and cooing, “Good girl, Cali, good girl.” The same dog lays on my uncle’s stomach, rising and falling as he watches the news. She yelps and licks my father’s hands when he stoops down to pet her. “Ew,” he says, smiling.

On Christmas day, I watched my cousin’s two-year-old spread out with his toys as Cali sniffed each one, trying to figure out which one she can turn into her own chew toy. As she settled on a small stuffed elephant, the toddler pulled on her ear to reprimand her. He reasoned with her in animated gibberish. He handed her a different toy, only to snatch it away at the last second, hugging her neck instead. She barked and licked his face. Later, he chased her around the house, trying to pull her tail.

This was all closer to Calvin and Hobbes than to Harlow. I took my phone out of my pocket and snapped a picture.