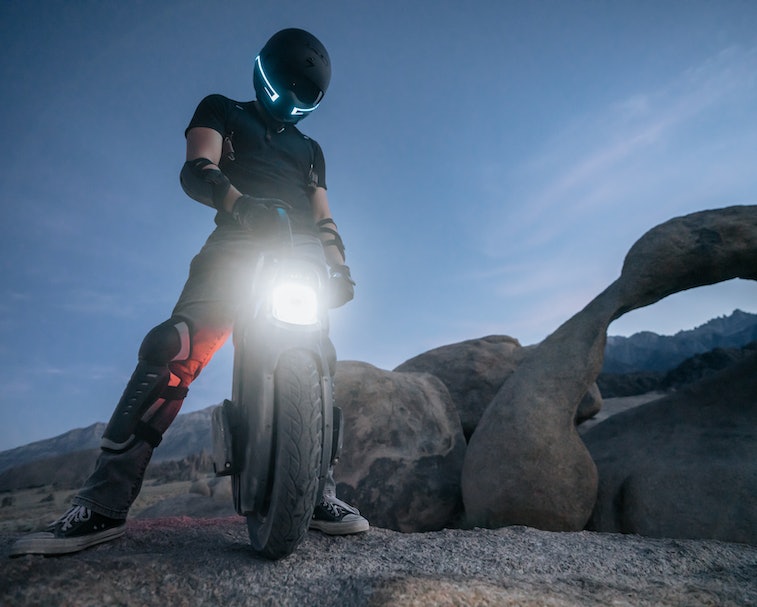 Called the V11, InMotion's all-terrain one-wheeler has a top speed of 34 mph (like the Hunter Board we covered last week), a 2,200 W motor (that's the nominal output, the actual is closer to 3,000), and a 1,500 Wh battery which — depending on how much you weigh and how you ride — could translate into a range of 75 miles between charges.

That's all insane, but for extra madness, there's also adjustable air suspension with travel of up to 3.3 inches and a wider-than-normal 18 x 3-inch tire with chunky tread. If you thought electric unicycles were peak dork, InMotion (dis)respectfully asks that you reassess your position. Just take a look at the video below. Have you ever seen an electric unicycle ramp and catch some air? Because we haven't.

Don't knock it till you ride it — If you live in any big city you've doubtless seen people riding electric unicycles, often whether they're legal or not. But you've likely seen far fewer of them than electric scooters, skateboards, or bicycles.

Part of that comes down to the learning curve required to become competent (and comfortable) on them. Electric unicycles are self-balancing, so when you turn them on, they immediately default to an upright position where the top of the unit is parallel to the ground. To move them forward, you lean forward. To move them backward — or to slow down — you lean backward. And to steer them, you lean left or right. But getting on them takes a little getting used to. You effectively have to hop on and go, because a spinning wheel wants to stay upright, but a stationary one wants to fall over.

Get used to them, though, and they're incredibly fun to ride. The larger tire makes for a more forgiving ride than a push scooter or skateboard, and some models — like this one — can really fly. Plus, sturdy models can ramp off pavements. Most importantly, though, all of them are highly maneuvrable. That can make them ideal for busy cities, and it's one of the reasons the Electric Unicycle Collective (Euco) is working to encourage their uptake as an alternative form of transportation.

Climb every mountain — The powerful motor and big battery also mean the V11 can handle inclines of up to 35 degrees. InMotion makes other electric unicycles, too, but says the V11 offers the most torque of any of them, thanks to a custom-designed motor. It's also got a slew of other great features that help explain the $2,000 asking price. There's a responsive brake light, a class-leading 4,800 lux headlamp, grip-tape on the enlarged pedals, and a three-way cooling system that combines convection-, conduction-, and fan-cooling.

InMotion has even gone as far as embedding the 1,500 Wh battery in the motor to lower the V11's center of gravity for better handling. Speaking of the battery, it supports 84 V charging, which means with the optional high-speed charger you can cut the 10-hour charge time in half.

Heavy is the unicycle that wears the crown — As with all things in life, there's a trade-off for this rich feature list. In this instance, it's the weight. The V11 tips the scales at 60 lbs (~27 kgs). The consolation prize is a kickstand of sorts, and a built-in handle that means you can roll it around rather than trying to carry it. Taking it on New York subways without elevators is going to mean a serious workout, though.

The $2,000 price tag, meanwhile, is pretty much in keeping with other electric personal transporters like the Hunter Board, OneWheel, or VanMoof's electric bicycles. If you're keen, pre-orders are open now, and the first units are due to ship at the end of September. We've never previously considered riding trails with a unicycle. But we're thinking about it now, if only because of how much fun it is imagining the looks on the faces of the MTB crowd.