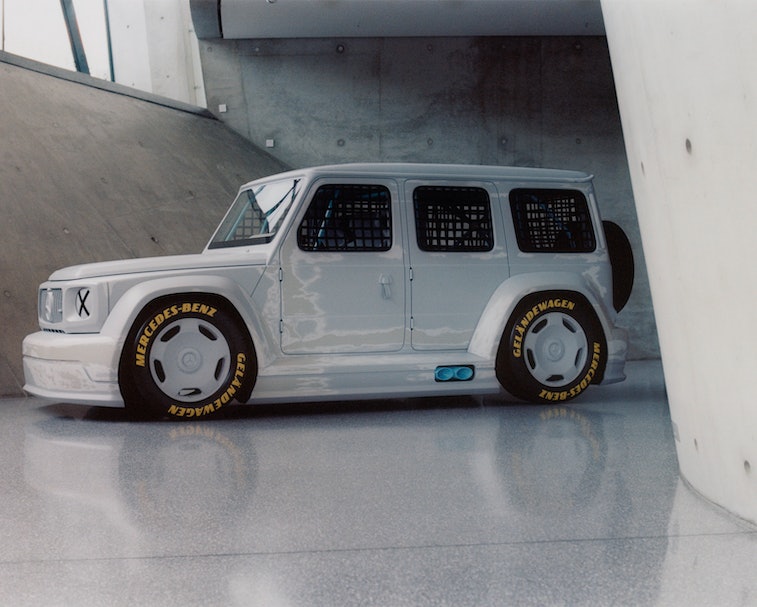 Companies outside the world of fashion are all too eager to enlist Virgil Abloh in a bid to appeal to the zeitgeist. Ikea and Evian have embarked on the Virgil "experience," and now Mercedes-Benz has handed him the keys, quite literally.

Abloh unveiled yesterday his creation for Mercedes, a G-Wagon designed for the streets and taking on the so-called appeal of the Toyota Scion. The one-off edition is part of Project Geländewagen, Mercedes' celebration of the G-Class' 40-year anniversary, and saw Abloh take inspiration from NASCAR vehicles.

Despite the racing sensibilities, the G-Wagon isn't drivable and should be seen more as a sculpture. As such, a smaller replica of the vehicle will go up for auction as part of Sotheby's "Contemporary Curated" collection on September 14. All proceeds will go to an unnamed charity that supports "international creative communities."

A toy car — Abloh's Mercedes has also drawn comparisons to the Kia Soul, a natural result of its low and boxy profile. It looks like the fantasy car of a young boy, one that becomes less and less appealing as the mind grows older. But because it comes from Virgil Abloh, it must be an event — one celebrated by the likes of Kanye West and the Jenners.

"(We wanted) to put the G into a completely different environment," Mercedes-Benz Chief Design Officer Gorden Wagener said in a conference call. "Everybody puts it off road... that's already out there. So we did the opposite. We turned it into a race car and put it down to the ground and put big racing tires on it."

Both the interior and exterior have been stripped to their components, with a hand-finish on the body meant to highlight its lines. A roll cage and racing seats have been added, while the dashboard was taken off and replaced with an analog version. Most everything is rendered in white, with baby blue and red highlighting some of the additional components culled from racing.

What happens to the real thing? — Abloh will show the full-scale piece as part of his upcoming exhibitions that have yet to be announced. It'll serve as yet another example of the diverse toys he's allowed to play with and how his design prowess is often superfluous.