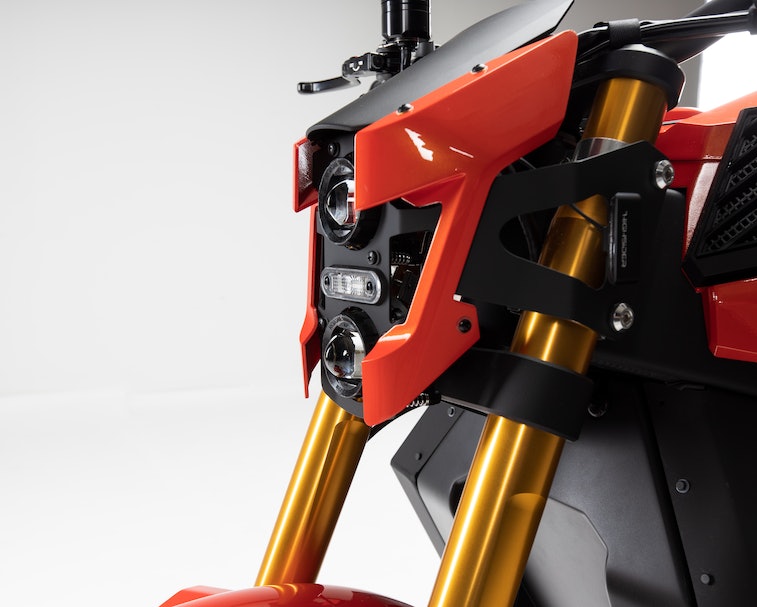 Finland’s Verge Motorcycles has dropped a huge selection of pictures of its forthcoming, angular, fully-electric TS two-wheeler ahead of its imminent production. The first thing anyone’s likely to notice? The Tron-like, hubless rear wheel. Even more impressive than the wheel’s appearance is that it houses an 80 kW integrated rim motor that produces 1000 Nm of torque.

That’ll catapult the TS from 0-60 mph in under 4 seconds. The top speed is electronically limited to 112 mph, but you can bet it’d be capable of far more than that if left to its own devices. Verge hasn’t released the details of the battery yet but is claiming around 120 miles of highway riding, or 185 miles of urban riding.

Electrek reports buyers can choose between roadster-like peg positioning or a more laid back, cruiser-like position, and that instead of a rear foot brake, Verge has opted to put both brakes on the handlebars. That’ll take a little getting used to for traditional bike riders, but, umm, who cares when the bike looks like this?

The fast and the fixable — Verge says the TS has “no chain, no oil, and tire changes can be completed using conventional tools,” so don’t worry that the wild rear wheel means costly maintenance, or that you can't swap out the tire at home once you've, inevitably, worn the one it came with smoother than Patrick Stewart's head.

We’re curious not only about the battery capacity, but also about how easy it’ll be to get the TS — and parts for it — in the U.S. For now, Verge Motorcycle’s website is extremely light on details, but we’ll likely know more when the first bikes start making their way out of the factory and to their lucky owners.

A full charge of the TS will take around four hours, but if you can find a DC fast charger, that time drops to less than an hour. We expect those will become more common as electric vehicles do.

First come, first served — A deposit of €2,000 ($2,170) secures you a Verge TS, and the deposit will be deducted from the total price of €24,990 (approximately $27,000). As Electrek points out, that’s somewhere in the middle between two other futuristic electric motorcycles: Zero’s SR/F (which costs less), and Harley-Davidson’s LiveWire (which costs more). The bikes are being built in the same order in which the orders for them come in. So if their popularity increases, so does the delivery time.

At this sort of price point, though, if you’re genuinely thinking about buying an electric motorcycle the decision will likely come down to which aesthetic and feature set appeals most, rather than which represents the best value. As with outlandish cars, no one’s buying a high-end electric motorcycle motivated by pragmatism and frugality. And what's a little wait time for a slice of the future? P.S. Yes, you can get the TS in blue, and no, it's no relation to the technology news site of the same name.

Read next: The best electric bikes for the coming apocalypse