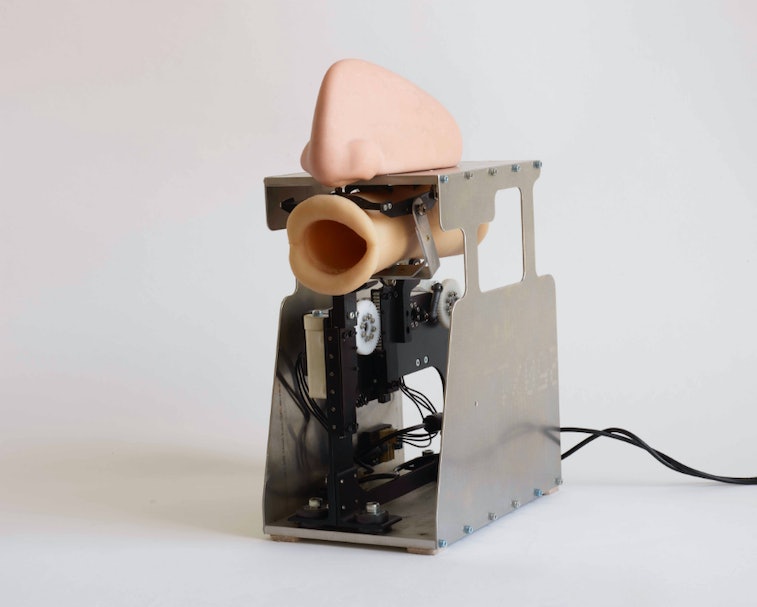 Diemut Strebe is a Boston-based artist who explores the intersection of art, science and technology to create thought-provoking installations, including a clone of Vincent Van Gogh’s ear and making a 16.78-carat yellow diamond essentially disappear by covering it with carbon nanotubes. In 2020, she produced something equally as impressive called The Prayer, which is a talking-mouth installation that is capable of creating and voicing prayers on its own. This one somehow slipped past us back then, but thankfully, MIT CSAIL blasted it out on Twitter this week and put it on our radar.

While the design is certainly stunning and has a surreal, post-modern feel to it, one can’t help but see not just an art installation but also a sex toy when confronted with the work in action.

The Prayer is described as an installation with “two organic and partly flexible forms mounted in a technical construction attached to a computer with self-learning software.” In order to voice prayers and personal contemplations, the machine uses AI-based free-text generation and AI text-to-speech generation tools by applying Natural Language Processing techniques to a specific text genre.

Strebe’s intention was to mimic the act of speaking in a stripped-down way, with the guiding question of the project being: How can we connect to the divine or supernatural using machine learning?

Nitty-gritty — So how exactly does The Prayer parse text to generate its own prayers? Strebe, along with a number of scientists at MIT, implemented a deep neural language model that is able to infer word meanings, grammar rules, and syntax from a database of texts and prayers, in order to synthesize original readings which are spoken aloud. These readings are also synchronized to the installation’s lip movements to make the whole process as natural as possible.

As noted by Strebe’s website, the database of prayers and texts include religions from all over the world:

The current list includes: Bible old and new Testament (Christian), Bhagavad Gita (Hinduism), Rig Veda of Hinduism, Koran (Islam), The Thirteen Classics of Confucianism, The Zhuang Zhou of Taoism, The Noble Eightfold Path of Buddhism The Talmud (Rabbinic Judaism), The Book of Mormon, (Mormons), Mayan Book of the Dead, The Popol Vuh and other prayer collections.

With all of that being said, it is easy to marvel at The Prayer for its technical capabilities... and the fact that it might be the most jaw-dropping work of art that bears a resemblance to a fleshlight.