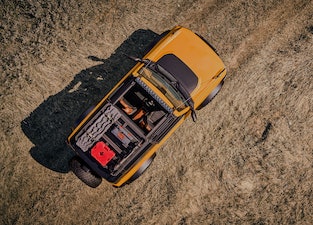 The number of pre-orders for the Ford Bronco since it was unveiled in mid-July.

Despite the economic worries ravaging the U.S., the 2021 Ford Bronco has nonetheless achieved over 150,000 pre-orders since it was unveiled a little over two weeks ago. Ford announced the figure during a call with investors this week. To pre-order, one only needs to put down a refundable deposit of $100, so there's inevitably going to be some cancellations or, as in the case of our office, people who pre-ordered more than one because they couldn't decide which body style they liked most.

As much fun for weekend getaways as for fleeing fellow survivors of a global catastrophe, the new, sixth-generation Broncos will come in two- and four-door variants and are the first updates to the range of all-terrain vehicles Ford's made since 1996.

The user interface suggests there's also at least one plug-in hybrid version of the Bronco incoming, though Ford's been tight-lipped about it, and the pre-orders to date are only for the more conventional, refined-oil-burning iterations.

Tesla-level hype — At the beginning of July, Tesla had seen over 600,000 pre-orders for its own multi-purpose pick-up, the Cybertruck. That's more cars the electric vehicle maker has ever built, and an impressive milestone in its history, but considering it was announced in November 2019, the Ford Bronco's reservation numbers could outstrip within a quarter if the early enthusiasm for it proves sustainable. That's to be expected, really. Tesla might be the most valuable automaker on earth, but it'll be years before it can outstrip Ford's production capabilities.

Lots of competition incoming – While Europe moves increasing to smaller vehicles, the Bronco proves there's still plenty of demand for big vehicles in America. In addition to the Cybertruck, Ford's also soon going to be competing with the likes of GMC's electric Hummer and Rivian's battery-powered trucks. That's in addition to the usual competition it has to contend with from internal-combustion-engine makers.

As it stands, though, you can't take the doors or roof off a Hummer or Rivian. So... there's that.