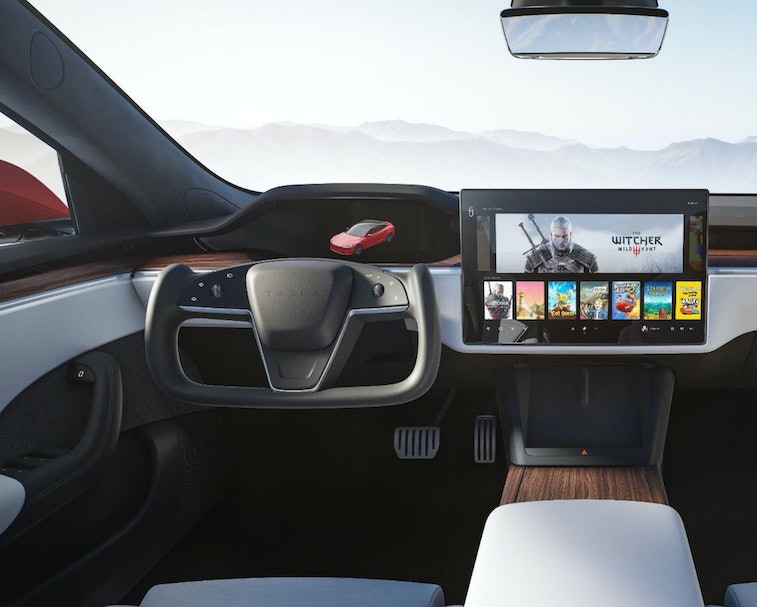 Tesla launched the original Model S back in 2012. That's not a long time in automotive terms, but it's an eternity in the tech world, and for a company that positions itself as much as a leader in technology as it does motoring, the original was beginning to show its age. The 2021 version embraces the minimalism of more recent Teslas while also introducing a squat, rectangular steering wheel we suspect will raise regulators' eyebrows, if not here in the U.S. then certainly in Europe, where steering wheels have to be, well, wheel-like.

More of less — If you're a Tesla fan, the first things you'll likely notice about the revamped interior are that's it's even more pared down than the original (which wasn't exactly busy), and that the central 17-inch infotainment touch display is now landscape rather than portrait. There's also a smaller, secondary 8-inch display between the front seats, no doubt for controlling the HVAC system in the rear.

Then there's that eye-catching steering wheel that resembles the one seen in the new Tesla Roadster unveiled in 2017. It's had the top chopped and its sides squared off and now resembles the sort of wheel you'd expect to find in a Formula 1 car, not a luxury sedan. A pair of thumb-friendly scroll wheels and flush touch buttons around each help maintain the minimalist aesthetic. Will it make it into the final car and past regulators' scrutiny? We'll have to wait and see. While it looks great, we fear it'll be annoying on long drives, where many of us (guidance to have both hands at 3-and-6 be damned) tend to rest a single mitt at 12 o'clock.

Of course, true Tesla loyalists will tell you that with full-self driving you may spend so little time toughing the steering wheel it's shape doesn't matter. But as will all fanatics, they're probably best dismissed by nodding your head and backing away slowly while smiling.

Make it Plaid, but with a plus — Design changes aside, Tesla's also included new drive units and battery packs and modules. There are now three trim / motor options to choose from. The entry-level dual-motor version starts at $79,990 (before any regional rebates) and offers a range of up to 412 miles, a top speed of 155 mph, and a 0-60 mph time of 3.1 seconds.

If you want to get stuck into the extras, metallic paint will still cost you $1,500 more, the optional 21-inch "Arachnid" mags will tack on another $4,500, and the white or cream interiors are $2,000 each. The controversial "full-self driving capability" adds a further $10,000 to the sticker price.

Made to, umm, game — Tesla's promotional images for the Model S include a selection of games displayed on the center display, and digging into the specs it's enthusiastic about mentioning both the built-in "[g]aming computer with 10 teraflops of processing power" and "[w]ireless controller compatibility."

Buyers will also get a year of complimentary access to video streaming, which includes access to Netflix, Hulu, YouTube, and Twitch, and something called "Caraoke." Or, you know, they can make like Diplo and use the display to lay down a beat. Safe to say, waiting for the kids to get out of school will never be dull again.

According to the U.S. Tesla website, deliveries of the new Model S in the base or Plaid trims are expected to begin in March, with the Plaid+ option available from "Late 2021." Let's hope it's addressed the quality control issues that have plagued the recently released Model Y, and the touchscreen failures that have affected some older Model S and X vehicles.