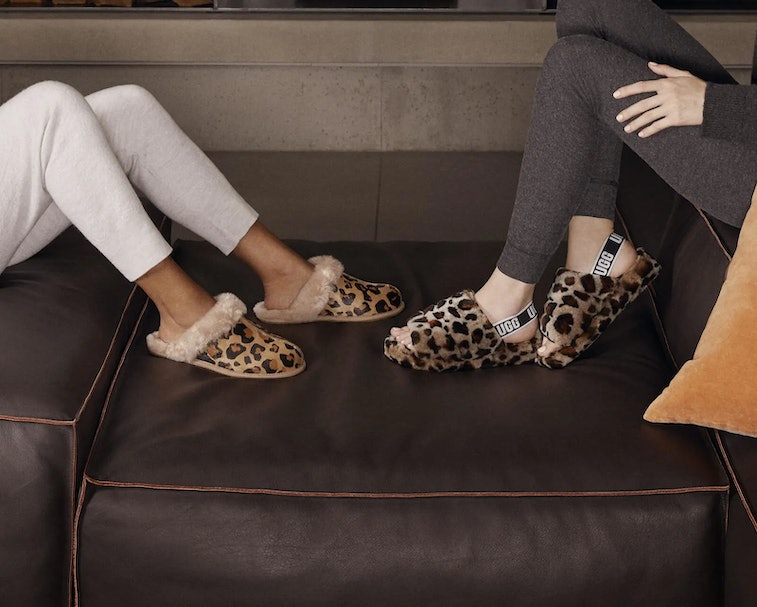 Steve Madden, a serial copier of superior footwear, has found itself as the defendant of a lawsuit filed by Ugg. At issue is the Fluff Yeah, a furry slide from Ugg that is both wildly popular and hilarious to see written out in a legal complaint. Ugg says that Steve Madden's "Fuzz" slipper is an illegal, and shameless, knockoff.

What's up for ruling isn't whether Steve Madden's slides look just like Ugg's — that much is both clear to a layman's eyes and not enough to hand down a judgment — but rather if the Fluff Yeah carries enough of a "secondary meaning" to render the mimicry illegal.

These suits are highly technical — In lawsuits like these, it's difficult for the plaintiff to win. The laws protecting fashion designs in the United States are fairly weak, and for a design to be illegal it must infringe upon the original's "trade dress." Such trade dress is only protected if it carries a secondary meaning, which Ugg's parent company Deckers is arguing is the case with the Fluff Yeah.

As reported by The Fashion Law, Deckers' suit argues that the Fluff Yeah "is one of the most well-recognized and commercially successful styles of UGG brand," thus creating a secondary meaning. It has sold millions of dollars in units, appeared on the feet of celebrities, and has been the focus of advertising campaigns.

Therefore, Decker asserts, Steve Madden has infringed upon Ugg's trademark "by producing, distributing, advertising, and offering for sale confusingly similar reproductions of [it] … [when] there are numerous other shoe designs in the footwear industry, none of which necessitate copying or imitating the Fluff Yeah trade dress."

Steve Madden's other copycats — You could read about Steve Madden's rip-offs all day, but we'll narrow it down to two that hit close to home within the sneakerhead community. Last year, it sold a "Malone" sneaker that looks a hell of a lot like Virgil Abloh's Air Jordan 1. Even today, you can buy the "Mallow," which also bears a striking resemblance. (But why would you?)

Abloh's friend Kanye West has also been subjected to the Steve Madden special. In 2016, the struggling brand released a sneaker that looked an awful lot like the Adidas Yeezy Boost 350.

So will Ugg win? — Not necessarily. Neither Nike nor Adidas sued Steve Madden over those designs, likely because they suspected they wouldn't win. Sarah Burstein, a design patent expert and University of Oklahoma College of Law professor, says she doesn't think Ugg has a strong enough case. "Design patents protect the actually-claimed design, not larger design concepts," she tweeted. "I don't think this is close enough to infringe, as a matter of law."

Steve Madden's practices may be gross, but they'll likely continue to get away with it because of American laws. Ugg may be flattered by the imitation, but it definitely isn't pleased about it.