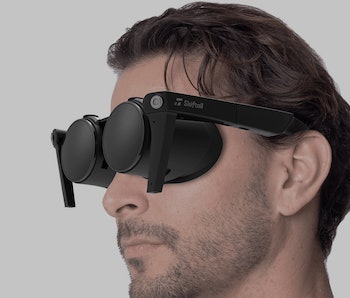 Looks like the days of strapping a big bulky VR box around our faces might finally be over. Shiftall, which is owned by Panasonic, has debuted its lightweight MeganeX VR headset with specs that rival the market leaders at CES 2022.

Shiftall’s design is definitely a step in the right direction for VR gaming. The MeganeX and its slimmed-down style should be able to better accommodate longer VR sessions but it still kind of looks goofy. Really, I don’t think there’s ever going to be a way to not look derpy when playing VR.

High-end specs — The MeganeX may be smaller than the other headsets out there, but its dual displays dethrone most of the popular options on the market right now. Shiftall worked with Kopin Corporation for its microdisplays and pancake lenses, making for a headset that offers a 1.3-inch OLED microdisplay at 5.2K HDR, or 2,560K in each eye, with a 120Hz refresh rate.

The MeganeX will be powered by a Snapdragon XR1 platform, have six degree-of-freedom head position detection, and use camera-based inside-out head tracking. Inside-out tracking does introduce the possibility of dead spots or inaccuracies but you won’t need to install external sensors, which does play up the MeganeX’s streamlined design. Shiftall’s headset also comes in at about 250 grams without its cable, or a little more than half a pound, making it less than a third of the weight of the Valve Index and the HTC Vive Pro 2.

VR muzzle — The MeganeX is estimated to cost less than $900 and is expected to be released in spring 2022. Shiftall also said that information about the accompanying controllers would be available before its launch. The price point feels a bit steep, but it could be more affordable than other hi-res tethered VR headset competitors.

Plus, if you want to look extra goofy when playing VR, Shiftall has got you covered. The Panasonic subsidiary also put out a microphone/silencer/gag/whatever-this-is for VR users. The mutalk is supposed to pick up your voice through an internal mic but also mute any noise leaving the device. I’m not sure if I’m ready to wear a silencing, muzzle thing just to play some Cooking Simulator, but hey if I have to yell at someone that the kitchen is on fire again, at least my roommates won’t hear me. Shiftall said the mutalk will cost around $200 and is expected out in summer 2022.