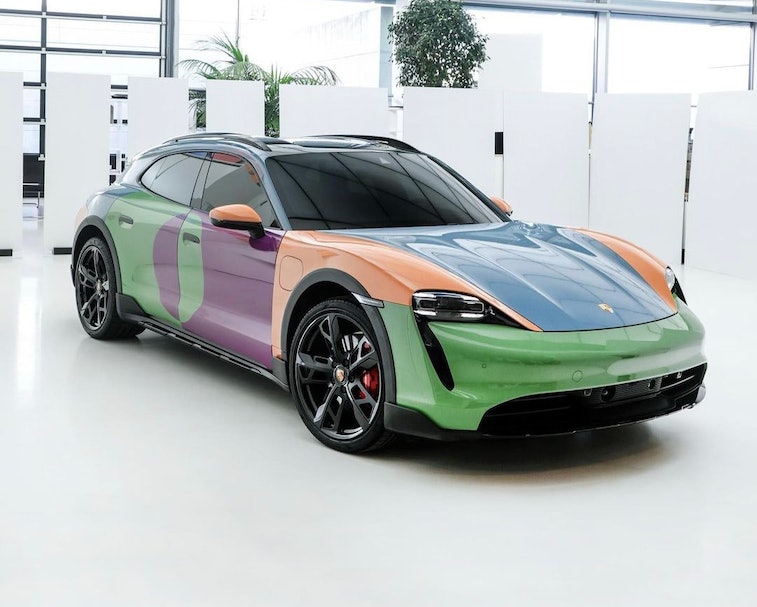 Sean Wotherspoon is living life in the fast lane these days, thanks to Porsche. On Monday at SXSW, the two debuted their collaboration, a one-off, fully electric Porsche Taycan 4S Cross Turismo adorned by his artwork.

All gas, no breaks — Part of the “Porsche Unseen” series, the car is color-blocked to the max in a cool palette of green, orange, purple, and blue. Inspiration behind the tones comes from his family, as each is named for someone near and dear to his heart: Nash Blue, Loretta Purple, Ashley Green, and Sean Peach. All of the hues come out of Porsche’s extensive color library and were hand-painted by the Porsche team.

More of Wotherspoon’s design flourishes include the circle on the doors, which is a nod to the German auto manufacturer’s races at Le Mans back in the 1950s. In an Instagram post, Wotherspoon explained that “the hand-painted artistry and time that goes into achieving the perfect circle on these cars is pretty unbelievable, especially when you’re dealing with curves like the Taycans.”

Pre-Porsche — Wotherspoon and Nike’s 2018 Air Max 1/97, a hybrid sneaker that combined two classics, first put him onto many sneakerheads’ radar and still has a staggering resale price of $1,234 four years later. He’s gone on to design more kicks, though none reaching the same highs in hype, including an Adidas Superearth, Adidas Superturf Adventure, and a wild Atmos x Asics sneaker.

The Round Two founder previously dipped into the vehicular world in 2020 with color-blocked Vespa Primavera 125 scooter. As for the Porsche at-hand, the interior will be revealed in-full later on in the week at SXSW. An auction for the one-of-one car could be in the works, and it sure would be a beauty out on the road.