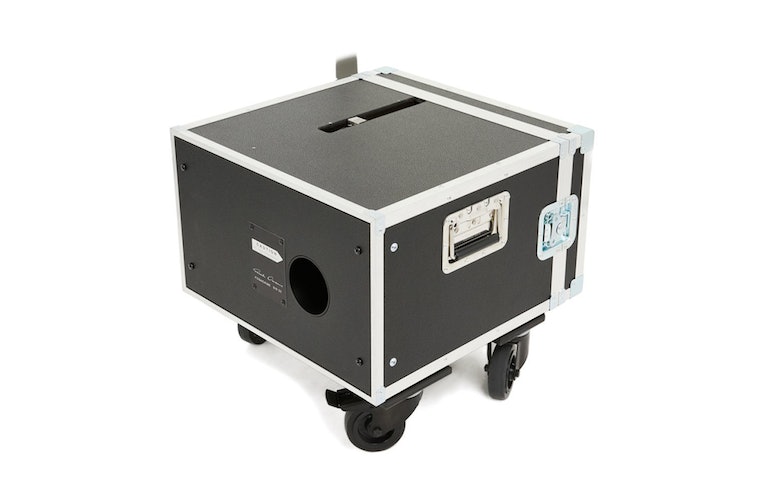 Rick Owens, aka fashion’s Lord of Darkness, wants you to hotbox your apartment.

The designer has released a trio of fog machines, initially shown at his aptly named Spring/Summer 2022 “Fogachine” runway show, to smoke up your home in style. The biggest of the lot doubles as a coffee table, the medium serves precisely its named purpose, and the smallest offers a portable and wearable approach to compliment any outfit. In other words, you can have your fog and wear it too.

Fog has long fit into Owens’ runways, which typically showcase brutalist and gothic themes. During the designer’s latest show, models held medium-sized fog machines while strutting down the runway — sometimes obscuring themselves within the clouds. At the time, Owens told the New York Times he was drawn to the “mysticism” and “disco hedonism” of fog, adding that he loved the “big, cheap, and dumb” feeling of the smoky effect.

In a fog — Owens’ own fog machines are anything but cheap, though. The smallest version of his fog machine, a 5.6kg handheld device, retails for $3,615 while the medium version is priced at $3,765. Chic stainless steel, rechargeable batteries, and nontoxic fog fluid play into the price, although the machine’s cost rivals that of the clothing Owens sells.

The biggest fog machine may be worth its $3,990 price tag, solely because it doubles as a coffee table that’ll almost certainly be the statement piece of your interior. Stainless steel and plastic construction won’t make it the most overtly luxurious piece of furniture you could find, but it does boast the factors of absurdity and a sign-off from Rick Owens. The table was designed to look like a flight case on wheels and features a removable coffee tray adding functionality. Rick Owens’ also insignia comes embossed on each handle and a side plaque intended to sits alongside the fog dispenser.

Let off steam — If you have a few thousand dollars to spend, the “disco hedonism” of fog can appear anywhere from your living room to your hand. The trio of fog machines are available on Owens’ website now and will undoubtedly sell out soon despite their price and presumably niche audience. Budget brutalists or those that miss out on the fog machines can turn to this $36 version as a much cheaper alternative, although it isn’t portable nor aesthetically pleasing.