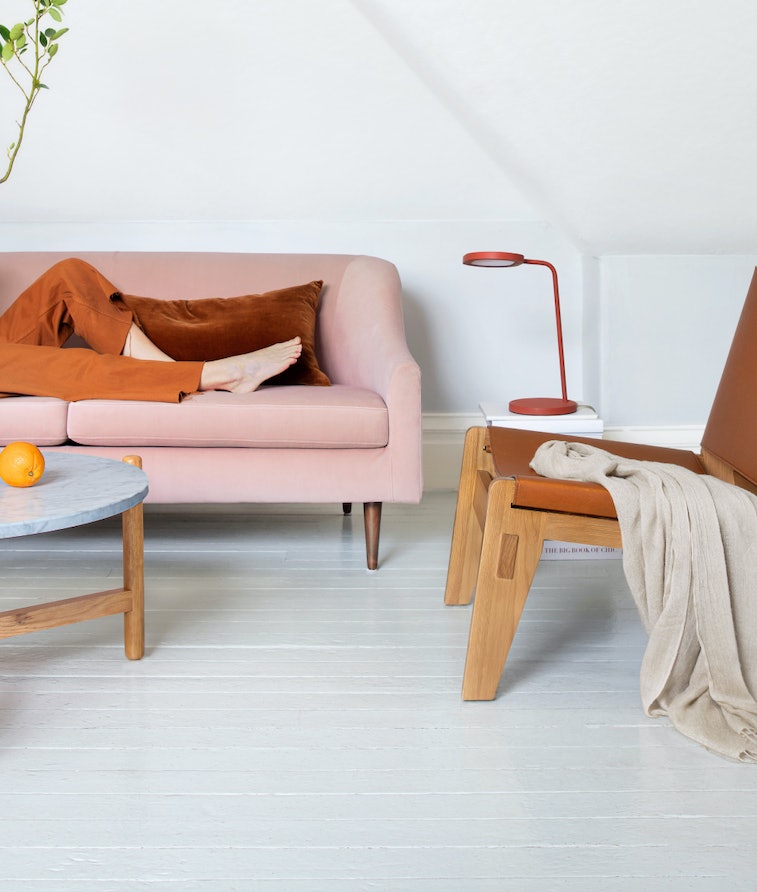 Julian Thomas doesn’t plan on owning any furniture in his next Brooklyn apartment, at least for the first six months he’s there. It’s not an act of minimalism, and it’s not because he can’t afford to furnish it, but because he’s joining a wave of young people who would rather rent than buy their home decor.

Some of the major moving costs like rent, utilities, and transportation can put a heavy strain on finances even before taking new furniture into account, which can be anywhere from $3,500 to $5,800 for an apartment and at least $16,000 for a house. Because of the financial pressure that comes with relocating, many are using rental services to their advantage.

CORT, Rent-a-Center, and AFR are furniture rental companies that have been around for over 40 years, operating in most US states to furnish residential and commercial spaces. Newer companies like Feather, Fernish, ZZ Driggs, Inhabitr, and Conjure aim to give younger city dwellers the ability to have high-end furniture through temporary or rent-to-own leases.

For example, a $1600 brown leather couch on Feather can be rented for $83 a month with a 12-month lease — a price that goes up to $285 and $395 per month if rented for more than three and one month(s), respectively. There’s also an option to buy the item, so if you want to buy the couch after two months, you’d only have to pay the $810 difference. Most of the companies deliver, assemble, and arrange the pieces for free in major cities like Los Angeles, New York City, Chicago, Houston, and Seattle.

“Rent-a-Center was a stigma to our parents. It was seen as cheap for not being able to buy their own furniture.”

While furniture rental isn’t exactly a new concept, Julian Thomas, a freelance publicist and DIY home designer renting in Brooklyn, pointed out that its overall acceptance has changed between generations. “Rent-a-Center was a stigma to our parents. It was seen as cheap for not being able to buy their own furniture,” he told Input in an interview. “But it’s completely shifted for our generation.”

With many of these companies ensuring a smooth delivery, pickup, and exchange process on their high-quality items, renting can be a cheaper and lighter alternative for those who live in major cities, can’t afford a moving truck, or don’t want to repair a fixer upper they found on Craigslist. It even satisfies generations influenced by TikTok and Instagram who want their space to be comfortable but trendy.

There’s also an element of sustainability to renting furniture that strikes a chord with younger folks who buy “fast furniture” from big box stores like Ikea. While these companies offer simple and affordable decor options that are popular among college students and first-time renters or homeowners, many of the pieces aren’t built to last and get thrown away if they’re not reused. This fast furniture industry contributes to 12.2 million tons of furniture and 3.4 million tons of rugs and carpets in landfills, according to the EPA.

While it may seem more cost-effective in the moment to translate Swedish instructions for a dresser or bookshelf, having to repurchase the same standard piece for every move can add up. Leo Aquino, a Business Insider reporter, realized he spent $763 buying the same cheap dresser six times over ten years, a move that weighed on both his wallet and the planet.

The convenience of renting can end up costing more in the long run.

Renting eliminates the reliance of fast furniture and allows the user to switch pieces as needed and according to their lifestyle. “[Younger people] are really going to have a positive impact on the planet and not just contribute to buying a thing, moving, and realizing nobody wants to buy [their] used dresser on Craigslist,” Ilyse Kaplan, COO of Feather, told Input in an interview. “We’re very aware of fast fashion, but fast furniture is sort of a new thing on people’s radar.”

However, paying a monthly fee for something that you don’t own can be a hefty expense in itself, especially if you have no intention of buying the piece after the lease is over. The convenience of renting can end up costing more in the long run because of the item’s flat price, as opposed to bargaining on Craigslist or buying an item on sale.

Kaplan believes furniture rental is only going to rise in popularity because of a higher dependence on the sharing economy. “Already today, people are renting lots of stuff and not even necessarily thinking about it. They’re renting their home, cars, music with Spotify, and maybe even renting their clothes with Rent the Runway,” she said. “Why not rent your furniture?”

While many of these companies claim they’re eliminating the hassle of transporting heavy furniture between apartments and frustrating customer service lines, they’re also pushing a society that rents, subscribes to, and shares everything without owning much. Rental services like Airbnb and Zipcar spearheaded this sharing economy concept that was embraced by millennials who can’t afford to buy a house or car.

“Not only can we not really afford to buy a home, we don’t really have that interest.”

Thomas also explained that younger people simply aren’t looking for something permanent. “Not only can we not really afford to buy a home, we don’t really have that interest,” he said. “We want to live in the city and being able to purchase in the city is very expensive. We also like to travel, so what’s the point of buying a home?”

Older generations often lived by a certain American Dream mentality of working one job and living in the same house until retirement, but millennials and Gen Zers are straying from those traditional values — though sometimes as a necessary choice, not a personal one.

Home ownership, fueled by inflation, isn’t a reality for most younger generations, and six in ten millennials are open to job hunting at any given time. Renting furniture is driven by convenience, accessibility, and a shift in priorities, but it could also very well be due to an inability to splurge on a thousand-dollar couch at once.

Furniture rental is a great option for those who switch up their home decor often and have the extra money to fund the expenses. Its popularity will probably continue to rise as more people realize that object permanence doesn’t equate to wealth the way their parents thought. Whether you rent or buy, the options are out there. Whatever stops you from having a frame-less mattress on the floor.