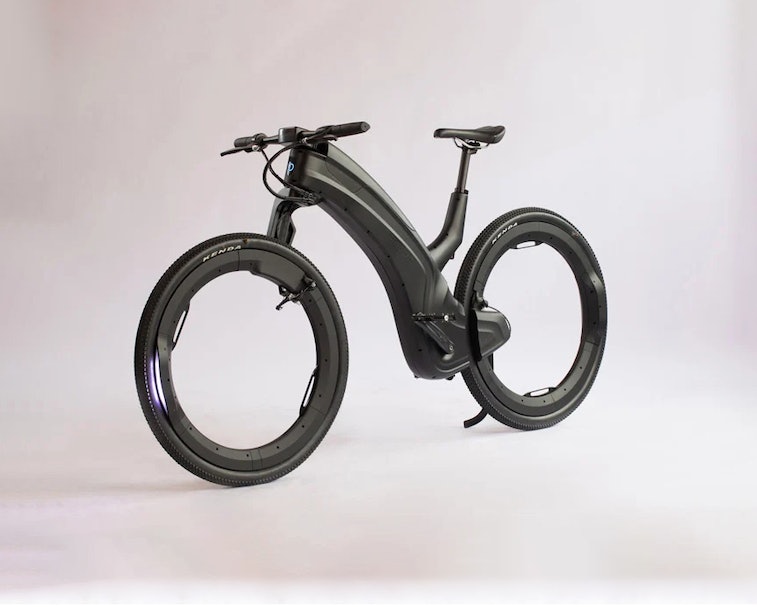 We love outlandish, electrified, personal mobility gear. The more outlandish the better, in fact. Even if, were you to graph it, there's often a fairly consistent relationship between the madness of a bike and the likelihood of it being vaporware. High on the outlandish scale is the Reevo "hubless" e-bike, an electric two-wheeler with potent Tron vibes, and a veritable shopping list of high-tech features. We'd call it fantasy, but there's some footage of someone riding one on the website, which suggests it's not vaporware despite the craziness quotient.

Reevo's been holding its cards pretty close to its chest, but a rummage around its social media channels suggests we'll find out more come October 1. We reached out for more info for good measure, but have had crickets in response. Clearly, it doesn't want to ruin the surprise. But there's plenty of the key details to pour over already.

Priced for the present — First up, there's the price. Reevo says early bird pre-orders (which open next month) will cost $1,899. Once those are sold out, regular preorders are $1,999. After the campaign is finished, the price leaps to $3,349. The pre-order price isn't that steep when compared to e-bikes like VanMoof's. The full-price is less compelling by that metric, but respectable when compared to super high-end rides like the forthcoming, 3D-printed Superstrata.

More attractive than the price is the feature list. First up, there's a removable, hot-swappable, 48 V battery with a USB port for charging your phone on the go. Removable batteries are uncommon on unique-shaped e-bikes, forcing you to go to the manufacturer when it comes time to replace them and making it impossible to keep a spare somewhere handy, like at the office (or your lover's house).

Interestingly, it seems like instead of a digital display, information-sharing duties (speedometer, remaining charge, etc.) fall to your smartphone, and there's a built-in smartphone mount to this end. We'll have to wait until October for more information on that front.

Tracking and security — Despite handing off some duties to your smartphone, the Reevo has its own built-in GPS tracking, which forms part of the security system that also includes a built-in rear-wheel lock, and a fingerprint reader on the handlebars to prevent unauthorized use. Reevo says the GPS tracking will work even with the battery removed, which sounds ideal... but again, there's no more info on how that works yet.

On the safety side of things, the bike includes an 800-lumen headlight built into the front wheel and a brake light that doubles as a turn signal. There's also an ambient light sensor to make sure you don't forget to turn the lights on when it gets dark.

The key numbers — Reevo isn't sharing range information yet, but says the 750W motor will enable a top speed of 25 mph. It's also promising three-hour charging, which suggests either high-capacity charging or dual charging ports (we expect it's the latter). More intriguing given the unusual form factor is the assurance of a "maintenance-free drivetrain" and comments on the company's Instagram page that suggest replacing tires and other nuts and bolts activities will be easy to do.

We have questions (and a comment) — We'd argue the Reevo is more "spoke-less" than "hubless," but we're happy to be proven wrong. We'd like to know if the fanny-pack storage bags shown on the website come standard or are a separate purchase. We'd like to know what the Reevo e-bike weighs. We'd definitely like to know the weatherproofing it offers, and whether we can get it with mud guards / fenders. We're eager to know what the ride is like given there's no obvious suspension. And we'd love to know when shipments are starting, because October pre-orders suggest you won't actually be able to get your bum on one before next year at the earliest.

Hopefully, all of these questions will be answered next month. Which gives us a little more time to see if we can find a few grand between the sofa cushions.