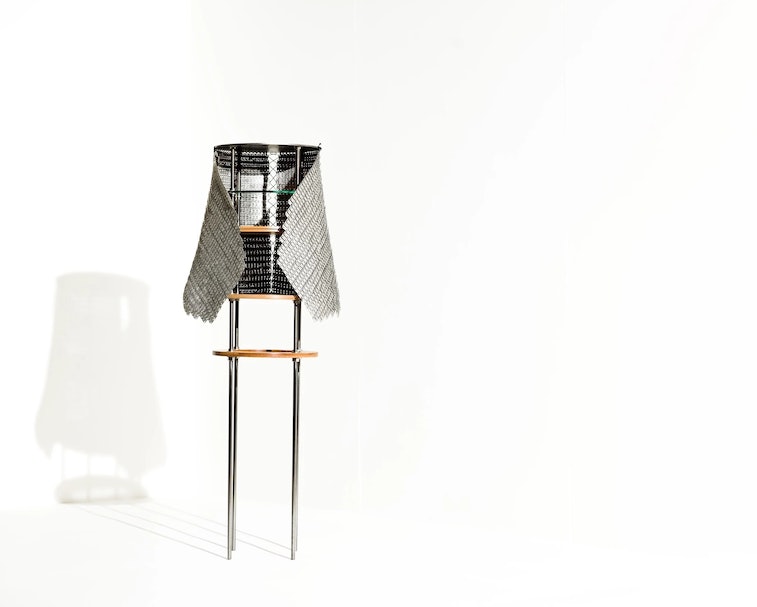 Archiving Raf Simons' catalog of work is already a serious and expensive endeavor, but it just got even pricier and obscure with a Grailed listing coming from left of left field.

The designer's university thesis from his education in Industrial and Furniture Design has somehow found its way to a Grailed user who's listed it for $99,998. Up for purchase is just one of the pieces from Simons' thesis, which included a series of cabinets and sofas. The cabinet at hand is called "Protection" and is composed of four threaded metal tubes "dressed" with a sort of metal armor. It's listed along with photos of other materials from the thesis for verification, but they aren't included in the sale.

Raf's logo hasn't really changed — Included in the photos is a VHS tape signed by Simons' with a logo that's pretty much identical to the one he's used throughout his fashion career. The designer worked in furniture for four years after graduating before launching his eponymous clothing label in 1995. Writing about the thesis collection, which was called "Corso," Belgian fashion reporter Jesse Brouns said, "The work can be considered as his first fashion project."

There's also a photo of the LUCA School of Arts graduation book for the class of 1991, with a section on Simons that someone's going to need to translate properly from Dutch.

Authenticated by Grailed — On top of all the accompanying documentation provided by the seller, Grailed moderators have digitally authenticated the listing. It's only right, as the $100,000 price tag more than doubles the current record for the most expensive Grailed item sold. That honor also goes to a Raf Simons design, the rare Riot! Riot! Riot! camo bomber jacket from his iconic Fall 2001 runway show. It sold for $47,000 after being spotted on the likes of Kanye West and Kim Kardashian, neither of whom even owned it.

For a closer look at Simons' thesis, check out the retrospective video below. Unless you've got $100,000 to blow, it's the closest you're going to get.