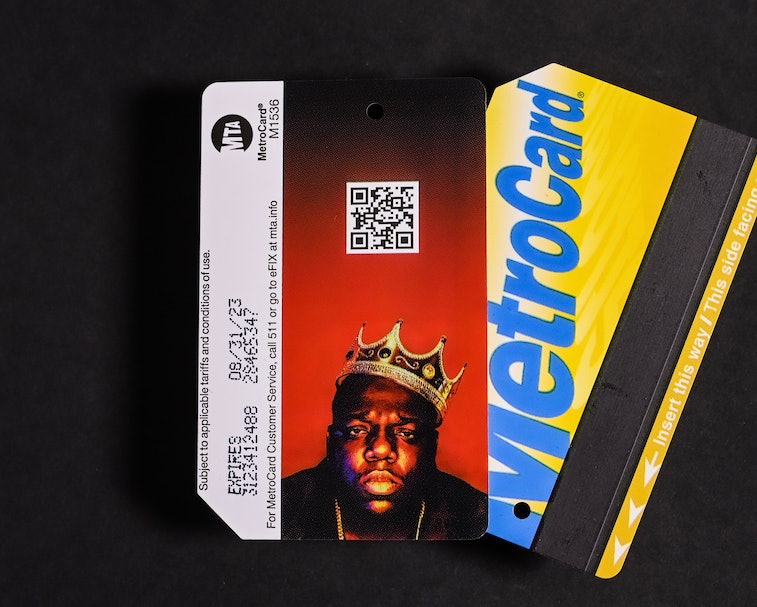 New York City is honoring what would have been Notorious B.I.G.’s 50th birthday this Saturday with a commemorative, limited-edition MetroCard. The special-edition transit passes will be sold at a couple of subway stations near the rapper’s Bedford-Stuyvesant neighborhood in Brooklyn and will be limited to 50,000 copies.

It’s the Brooklyn way — The MetroCard’s main image is a timeless snapshot from Biggie’s final photoshoot in 1997. Photographed by Barron Claiborne, the “King of New York” shoot is one of the rapper’s most symbolic images, appearing on the MetroCard with a gradient red and the crowned Notorious B.I.G. poised at the bottom. The rapper’s plastic crown worn in the photoshoot originally only cost $6 and sold through a Sotheby’s hip-hop auction for a hefty $594.750 in 2020.

The MTA started the process of phasing out the flimsy MetroCards in 2020 (which replaced subway tokens in 2003), but every so often the system gets playful with commemorative versions. You can find pretty affordable cards for Wu-Tang Clan, David Bowie, and even Anita Baker on eBay, while Grailed has plenty of cheap Supreme, Bape, and Rimowa cards for sale.

A Biggie birthday — Although there are bound to be lines at the subway stations to secure a Notorious B.I.G. MetroCard on Saturday, other celebrations will also be taking place across the city. A lighting ceremony will go down on Friday at 4 p.m. at the Empire State Building and people can take pictures with a life-size avatar of the rapper throughout the weekend.

On Saturday, the Empire State Building will be lit in red and white with a rotating crown and “50” in the mast. Meanwhile, in Brooklyn, the Barclays Center will play a video montage to commemorate the rapper’s discography.

If you want to grab a Notorious B.I.G. MetroCard, head to Lafayette Avenue station, Atlantic Avenue - Barclays Center station, or either of the Clinton –Washington Avenue stations. The Gothamist reports that the cards will be distributed randomly across the four stations, so you may have to buy multiple MetroCards — at $2.75 apiece — before you strike gold.