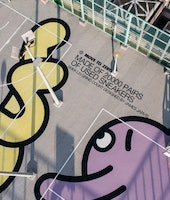 How many sneakers were used in the Hong Kong court.

Nike is giving new life to old sneakers via a basketball court in Hong Kong partially made from its used shoes. Dubbed the Shek Lei Grind Court, the establishment isn’t just named after the grind players put in on the court — its surface is covered in Nike Grind, made up of 20,000 pairs of used sneakers.

With the concept of “more performance, less waste,” Nike is always looking to incorporate sustainability into its business model. Since 1992, the brand’s Grind program has saved old sneakers from landfills to repurpose them into materials like plastic, rubber, foam, fiber, leather, and textiles. Such components can then be used to make new sneakers, apparel, and projects as big as sports centers.

Bringing community to the court — But for Nike, its sustainability program is more than repurposing old sneakers — the brand also wants to serve its global community. Using its signature colorful Grind surface in Hong Kong, Nike has transformed a Kwai Chung residential neighborhood's estate basketball court into a state-of-the-art community space.

Surrounded by plenty of high-rise buildings, Nike’s makeover of the Shek Lei Grind Court doesn’t just benefit basketball players, but those living in the area. Serving as a huge canvas for public art expression, the court now houses artist James Jarvis' signature sphere characters, shown playing basketball surrounded by mini-Swooshes. The upgrade is sure to be appreciated by those who look down on the court from their windows, as well as those who want to use the space for other activities.

Sneakers too good to be ground — To further include the community in its sustainability initiatives, Nike announced in April that select stores plan to sell refurbished sneakers at a discounted price. The circularity program, dubbed Nike Refurbished, gives shoes a second life and makes some models more accessible to consumers that couldn’t afford retail pricing.

Nike, which accepts worn or unworn returns throughout a 60-day post-purchase window, plans to take its returned sneakers and either restore them for resale or recycle the shoes into Nike Grind materials, depending on the footwear’s condition.

The refurbishing program has only been confirmed in 15 Nike retail locations so far, but the brand plans to expand the operation throughout 2021. Participating stores can be found on Nike’s website, which will hopefully also partake in distributing the Refurbished footwear in the future. After all, the goal of the program is to make sustainability affordable and accessible for consumers.