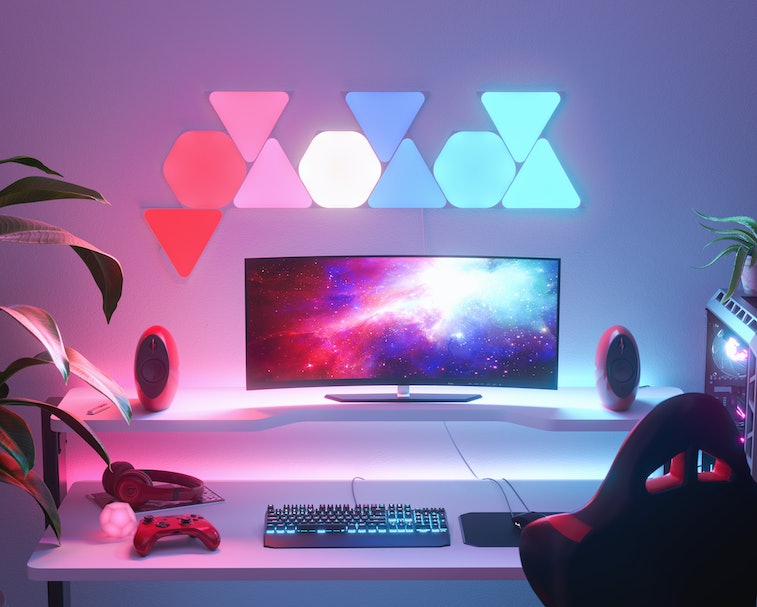 Canadian company Nanoleaf today unveiled two new additions — large triangles, and half-sized ones — to its Shapes range of color-changing, wall-mountable light panels. The panels can be used alone, or together with the existing hexagonal panels in the Shapes lineup. That should make it easier to create specific and detailed layouts with them, while also allowing users to tuck them into cramped or irregularly-shaped spaces.

Nanoleaf also announced it's branching out and will soon be offering a new range of smart-bulbs and LED strips it's calling "Essentials." Those could challenge the likes of Philips Hue and Ikea's Trådfri bulbs (and the former's lightstrips), but we'll have to wait a little longer to find out the key details on those like pricing and features. They'll go on sale in November at $19.99 for the bulbs (which is a premium over Philips and Wiz's $13 full-color bulb, but not exorbitant), and $49.99 for the LED strips.

The company also gave us an update on its Learning Series we first saw at CES back in January. The Learning Series is a collection of smart switches and sensors that will learn a users' lightning preferences — much like a Nest Thermostat does with heating requirements — so it can preempt them. Finally, it also teased something called "Nanoleaf Elements," but we'll have to wait until next year to find out what that includes. For now, though, one thing is clear: Nanoleaf wants to own smart lighting.

Interoperable — One of Nanoleaf's key differentiators has always been the intelligence of its devices. Connect panels together and the app automatically figures out their alignment, which is key for animated lighting effects, or when creating custom ones. Similarly, the Shapes range has a built-in microphone in the controller that enables the panels to react dynamically to audio, and touch sensitivity means you can set to respond to presses.

All three of those features are available for the new Shapes panels, and the Nanoleaf app has also had an update that allows for more granular color control and the option to remove settings or features you don't use. The ability to mix and match differently shaped panels for the first time is thanks to an addition to Nanoleaf's software it calls "Connect+." Like all existing Nanoleaf hardware, the new Shapes and Essentials items work with Alexa, Google Assistant, and Apple's HomeKit.

More links — Nanoleaf's early panels had one connection point on each edge, meaning they could only be connected with a full side of one panel touching a full side of another. With it's square, "Canvas" panels — which also introduced the touch controls now found on the Shapes range — the company began offering additional connection points so that panels could be connected with only half of each overlapping. That same staggering comes to the new Shapes panels, which opens up the layout possibilities considerably.

Lookout Philips — We'll have to wait to find out what exactly the Essentials range of bulbs and strips are like to install and use, but given Nanoleaf's track record, it could pose a serious challenge to other smart-lighting companies. The company says its Essentials products will work with the Thread mesh-networking protocol and says that should ensure rock-solid connectivity.

That said, Nanoleaf actually started out selling LED smart bulbs (the unusual, geometric, and elegant Nanoleaf One) before shifting its focus to the smart light panels it's now best known for, and which have become a staple accessory with streamers, YouTubers, home-studio owners, and smart-lighting fans alike. with a loyal existing user base and a reputation for high-quality, long-life products, it could prove a force to be reckoned with.