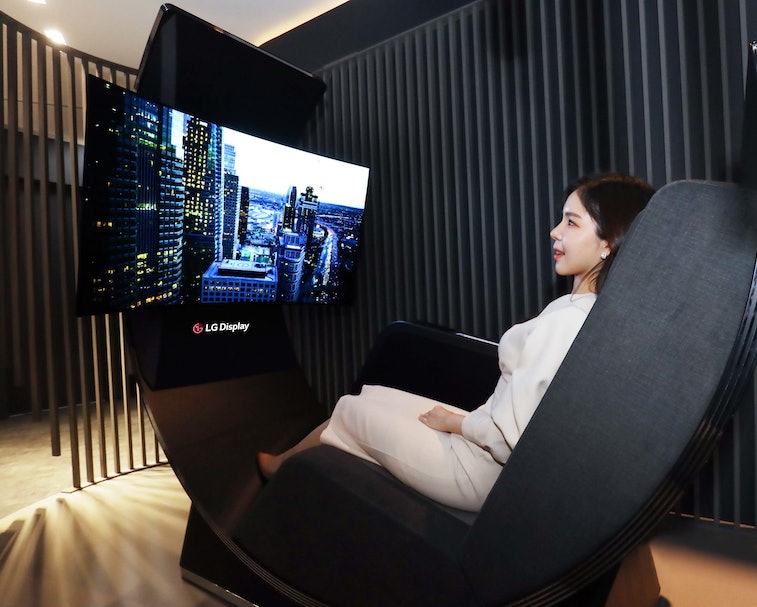 Is it really CES if LG doesn’t showcase its display tech with some wild, futuristic concept? On display this year, the South Korea company will reveal its “Media Chair,” which is pretty much a two-in-one pod that combines a reclining chair and a TV.

While bizarre-looking, LG’s chair does offer the advantage of almost having a personal movie theater in your apartment. Its cradle-like design also looks pretty comfortable, especially if you’re planning to spend several hours being coddled by an OLED nest.

For all we know, this may be how everyone watches TV in the future — alone and comforted only by the sweet embrace of a high-tech recliner, but it’s still hard not to consider the social implications.

LG’s conceptual design really does away with the communal aspect of watching a movie together on the couch, but then again, plenty of people are already watching movies alone on their laptops or computers anyway.

Vertical viewing — LG’s “modern relaxation device” concept also features a comfy recliner combined with a curved 55-inch OLED screen. According to LG, the screen’s curvature radius of 1,500R is the optimal angle for using the display.

You’ll be able to really feel whatever movie you’re watching too because the media chair’s audio system can make the display vibrate to produce sound instead of using the external speakers. And if you prefer to scroll through TikTok all day in your TV pod, you can hit the pivot function on the armrest’s built-in display to rotate the screen into a portrait orientation.

The OLED displays that are featured in the media chair are built with millions of self-emitting pixels so there’s no need for a separate backlight to brighten up the display. The flexible screens also come in bendable, foldable and even rollable styles, according to LG.

The future of exercise — But that’s not the only funky and futuristic concept that LG will show off at CES 2022. Instead of sitting in the TV pod all day, you could get some miles in on its stationary bike concept that’s surrounded by three OLED displays.

LG’s “Virtual Ride” product concept definitely dwarfs Peloton’s single-screen design by featuring three vertical 55-inch flexible monitors that wrap above the rider. This novel design is meant to give the user full immersion, even it feels weirdly reminiscent of that one Black Mirror episode.

With these two new concepts, LG continues its tradition of unveiling unique display ideas during CES. Last year, the Korean manufacturer showed off its smart bed with a 55-inch transparent OLED screen that can pop in and out of the foot of the bed. Many of these don’t actually make it to market, but LG has shipped off some its conceptual designs, like its 65-inch rollable TV that retailed for $100,000.

LG is also planning to introduce more traditional products like its new OLED displays, but the TV pod is sure to attract attention. After all, if you’re going to be a couch potato, you might as well do it in comfort and style.