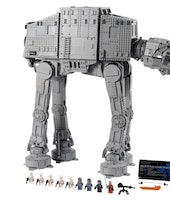 The number of pieces in Lego's new AT-AT model

A new Lego AT-AT model that pays homage to the iconic Empire invasion of a Rebel base on Hoth, as seen in Star Wars: Episode V — The Empire Strikes Back, will soon be available to the masses. The model stands just over two feet at 25 inches, making it about the size of a small dog. The full dimensions:

The brand has been pushing the limits with its sprawling and ultra-realistic models recently, some involving thousands of pieces. Look no further than this Home Alone set that has close to 4,000 pieces for an accurate representation of Kevin McCallister’s house from the iconic family film. Or this Adidas Superstar replica model.

As with most of Lego’s most ambitious projects, the upcoming AT-AT focuses on the details. The cockpit and body of the machine has enough space to fit up to 40 mini-figures in addition to 4 speeder bikes, giving a realistic scaled model of the original. Nine mini-figures are included with the purchase, so you can mix and match them according to your needs. There are also rotating pieces, such as cannons and movable legs so you can recreate all of the famous scenes from the blockbuster movie.

For the serious collector— This AT-AT joins the Lego Ultimate Collector Series lineup, which has been releasing ambitious models that aim to represent classic Star Wars ships and characters. In years past the brand has put out a republic gunship from the Clone Wars saga, an imperial destroyer from the original trilogy, and everyone’s favorite droid: R2-D2. All of these builds are recommended for advanced builders, as I can only assume they require an extensive amount of time and effort to construct.

While the new AT-AT is stunning, it cannot compare to this life-sized Lego replica of the Toyota Supra (though, for what it’s worth, the Supra was not something that was commercially available, and building anything close to that would almost certainly require some kind of third-party assistance).

Now feast your eyes on a few more pictures of that AT-AT: