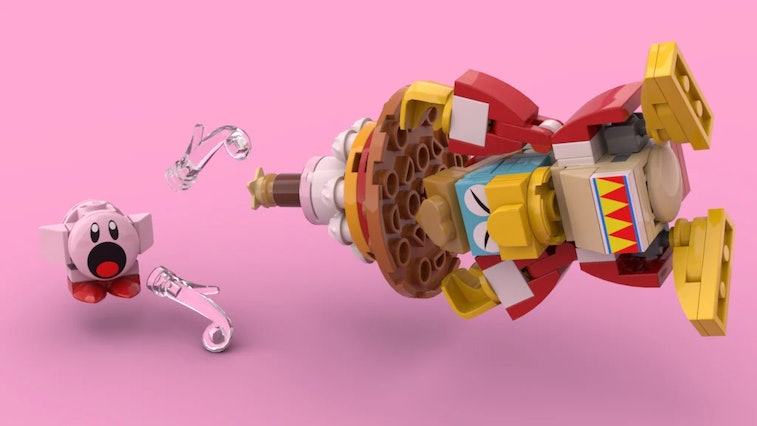 LEGO Ideas essentially functions as a gateway to become a fan designer. Interested parties submit their best ideas, which involves the creation of a prototype, and if approved may see their concept become a reality. One of those concepts that exists on the Ideas website right now is the Grammy-nominated character, Kirby. Designed by user JayJayJay, we get to see the amorphous pink blob, along with Meta Knight and Kind Dedede, coexist on Dream Land.

There are 25 days left to cast a vote in support of this Kirby project — Once designs earn 10000 votes they are reviewed by a panel of “experts.” As of this writing Kirby’s Dream Land Kingdom is closing in on 5, 000, so it still has a ways to go. So, don’t sleep on this awesome project and submit a vote if you’d like to see it be brought to life, hopefully.

A number of the projects on LEGO Ideas take cues from popular culture and entertainment. Besides the Kirby set, there have been designs based on Metroid, Animal Crossing, The Legend of Zelda, and Among Us. As Nintendolife points out though, all of them failed to make it past the expert review, despite earning the necessary support. Could Kirby succeed where other Nintendo designs have failed?

More than gaming— The amount of designs that exist on the Ideas page have a wide range. There are more traditional ideas that you could imagine LEGO making on its own like this Medieval Blacksmith set, which is actually being produced. Home Alone and Seinfeld both made it to market.

My personal favorite are everyday items that have been legofied. Take this pair of Air Jordan 1s, for example:

It’s worth combing through the LEGO Ideas feed to see fan-created art take on a whole new meaning. You never know what you’ll find to love.