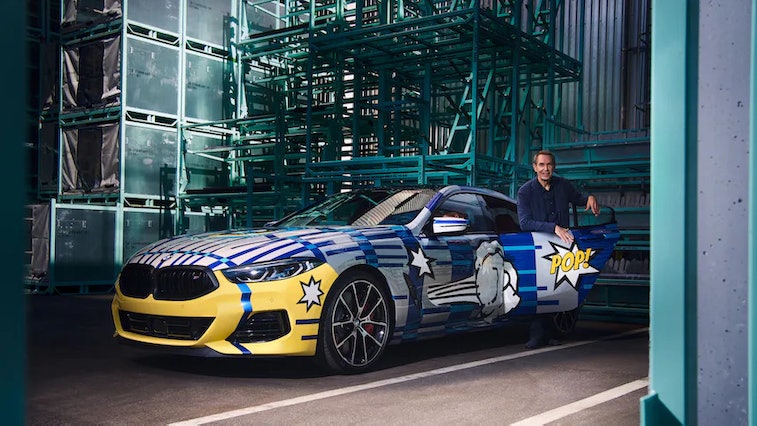 American artist Jeff Koons has a thing for comics. Having worked together in the past, Koons is back to putting his art on BMW’s four wheels, using the M850i x Drive Gran Coupe as a canvas.

Dubbed the “8 x Jeff Koons,” the car takes inspiration from comics of the 1950s and ‘60s. A primary color palette of blue and yellow wrap it from bumper to bumper, while details like smoke clouds, cartoon sparks, and “Pop!” messaging are found throughout the body.

The Koons-Mobile — The collaboration is limited to only 99 units; their creation took a team of specialists and extensive craftsmanship. Each required 11 different hand-painted phases, amounting to several hundred hours of labor per car, according to a press statement. Two BMW teams at the Dingolfing and Landshut factories in Germany were responsible for production, but, given the amount of work, only two could be produced per week. You do the math.

The interior detailing is mostly reminiscent of a classic BMW 8 Series with brown and red wine leather and carpeting, but the seats are all comic. Bright red and blue seat covers hint at Spider-Man’s legacy, pulling the rest of the bold auto’s look together.

Living in the fast lane — The “8 x Jeff Koons” cars are running at a $350,995 MSRP, complete with a certificate of authenticity signed by Jeff Koons himself and BMW Chairman and CEO Oliver Zipse. One unit will also be available for auction at Christie’s on April 4 in New York City, and another will be on display at the Rockefeller Plaza on April 1-4 before conducing a world tour.

Koons has come a long way since his balloon animal and metallic Roman sculptures that catapulted his notoriety in the art realm. But his main philosophy still rings true: What matters is how we relate to each other and our awareness of everything we are surrounded by. We’re aware of the comic car, that’s for sure.