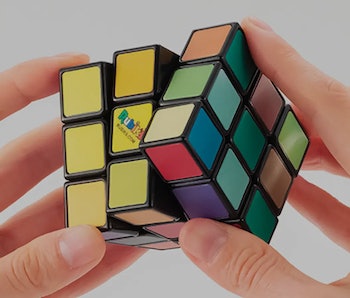 For most people, there’s little appeal in mastering the Rubik’s Cube — especially two years into a pandemic, when crawling out of bed and going to work seems like enough of a challenge most days. Those who enjoy pain and suffering, however, may take interest in a new “impossible” variant of the Rubik’s Cube, which features color-changing squares that make it even harder to defeat.

MegaHouse, a subsidiary of the company that produces Rubik’s Cubes in Japan, is to blame for the even more challenging puzzle. According to Japanese publication SoraNews24, MegaHouse sought to make the Rubik’s Cube more difficult without fundamentally changing its design, leading it to swap out the toy’s static colored tiles for iridescent ones. Each tile shifts color depending on the angle the Rubik’s Cube is viewed from, making it all that more difficult to solve the puzzle.

Do you want to play a game? — Solving the original Rubik’s Cube — which boasts 43,252,003,274,489,856,000 different combinations and only one solution — is a feat in itself for most people, although the world record for solving a scrambled cube currently stands at just 3.47 seconds. The impressive achievement can be accomplished by memorizing a set of specific patterns and movements, as well as memorizing the colors of the tiles on each side of the cube. The latter strategy is challenged by the newest puzzle, hence its title “Rubik’s Cube Impossible.”

To promote the color-changing cube, MegaHouse challenged two puzzle experts — each capable of solving the original Rubik’s Cube in about a minute — to solve the Rubik’s Cube Impossible. One gave up entirely, while the other took about three hours to complete the puzzle. An official solution guide (see: cheat code) has since been shared by Rubik’s to assist would-be speedcubers.

Shiver with anticipation — Masochists (and sadist gift-givers) can check out the Rubik’s Cube Impossible on the MegaHouse website, where the puzzle is set to retail for 3,080 yen, or about $25. The site states the puzzle will release in Spring 2022, although it doesn’t appear to be for sale just yet — adding even more suffering to the classic Rubik’s Cube. A proxy service may be in order to get one stateside, but stay tuned for more release details.

Watch the full breakdown of the Rubik’s Cube Impossible — and those that try to beat it — here.