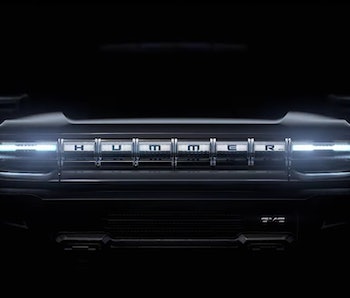 Earlier this month, reports indicated GM is planning on resurrecting the Hummer as an electric vehicle. It sounds like something of an oxymoron, delightfully so, and GM has confirmed the news in a pair of brief teasers.

The clips arrive ahead of a longer ad starring LeBron James set to debut during Sunday's Super Bowl. While giving off zero emissions, the new Hummer will boast up to 1,000 horsepower and 11,500 lb-ft of torque. GM also claims it'll reach 0-60 in three seconds flat.

More waiting lies ahead — Don't expect too much more info to come during the Super Bowl, as the full announcement is pegged for May 2020. This is the first new Hummer since GM went bankrupt in 2009, and it'll live under the GMC brand instead of on its own. First deliveries of the vehicle are planned for Fall 2021, ahead of the early 2020 timeframe initially expected.

Here's to a new reality in which driving a Hummer doesn't make you a daisy-stomping douche.