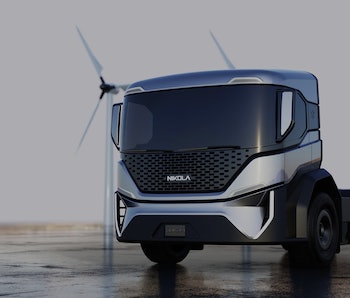 Zero-emissions truck maker Nikola (yes, it's really called that) has secured huge amounts of venture capital despite limited real-world releases, to the chagrin of legacy automakers like GM. But now the company — which specializes in battery-electric and battery-hydrogen powered freight trucks — has an actual order for real products with a genuine use case.

The order comes from Republic Services, a U.S. recycling and solid waste processor, and Nikola says it plans to begin on-road testing of what it's calling the Nikola Refuse in early 2022, with delivery of the first vehicles to follow in 2023. If things go well, there's the option to double the scale of the contract to 5,000 trucks.

We're taking the news with a pinch of salt, though, given Nikola has more closely mimicked the all-talk-few-products EV-maker Fisker than its rival with the other half of its namesake, Tesla (which it's also suing). Nikola is accused, for instance, of having misrepresented the capabilities of a pre-production vehicle. Tesla, meanwhile, disregards its workers' safety and chronically misses deadlines, sure, but it there's no disputing it actually makes most of the products on its website.

A great idea on paper — Skepticism aside, hydrogen-electric (or pure electric) garbage trucks make a lot of sense. By nature they do a lot of stop-starting, and when fully loaded they need plenty of power to keep moving. Plus, all that stopping and starting means the current gas-powered solutions spend longer spewing noxious fumes in the suburbs and commercial areas in which they ply their trade.

That makes electric vehicles an ideal candidate. They've got plenty of torque and horsepower, and assuming the depot isn't too far away, even though the expected range is only 150 miles to a charge, there's no need for range anxiety... because no one's taking them on cross-country adventures fully loaded with the family and the pooch.

With his characteristically understated demeanor, Nikola CEO Mark Russell calls the deal "a game-changer." Adding that refuse removal services have tended to order truck chassis and bodies from different suppliers. "Nikola has fully integrated the chassis and body, covering both with a single factory warranty," Russell explains, adding that the trucks "will include both automated side loaders and front-end loaders — all of which will be zero-emission.” Perhaps he can convince New York City to invest in street-side, car-sized communal skips that can be automatically emptied like they do in Edinburgh, Scotland, while he's at it. It'd sure beat the random-piles strategy the city currently favors.

Three to get ready — Nikola's garbage truck will use the Nikola Tre platform. It's the smallest of its three hydrogen-electric freight trucks (the others are called the One and Two). Like its largest siblings, the Tre doesn't actually exist yet. Nikola is building a factory in Arizona which is expected to open this year, though, at which point it'll doubtless be enthusiastic about getting trucks from CAD files onto roads to not just take out the trash, but also stop the trash-talk.