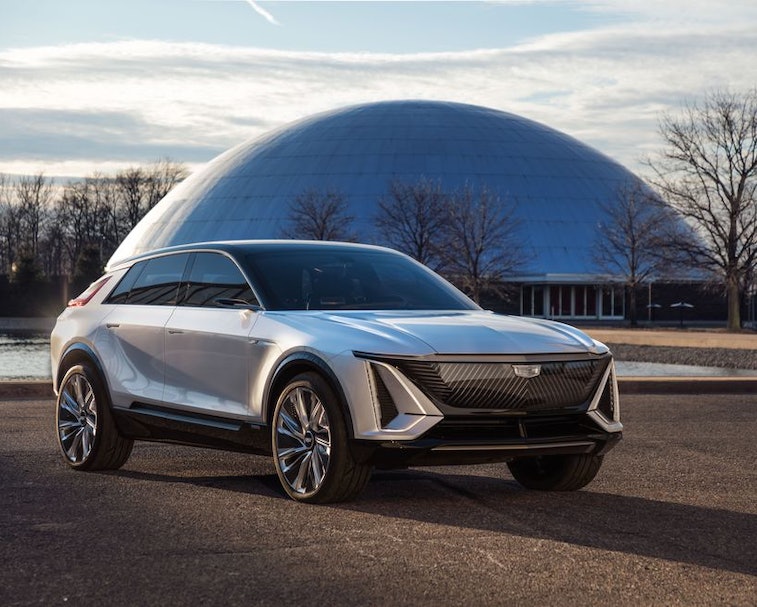 General Motors today unveiled the Cadillac Lyriq, its all-electric luxury sedan that was originally meant to be unveiled in April 2020, before the global coronavirus pandemic put those plans on ice. Four months behind schedule, today we got a look at the Lyriq and it looks amazing.

There are plenty of design decisions to love, including a luxurious interior complete with a curved, 33-inch digital dashboard and infotainment display. But the timeline is less ardor-inducing. Production isn't slated to start until late 2020, with deliveries to follow in 2023.

A new platform — The Lyriq is built on Cadillac’s new Ultium platform that seeks to put the largest capacity, most compact battery cells possible in the floor of the car. It's also the same platform that GM will use for a range of other electric vehicles. Like BMW, GM is promising 20 or more EVs in its lineup by 2023 (which could include a mix of plug-in hybrids and fully-electric automobiles).

That platform allows for more or fewer cells to be used depending on the intended use case, the scale of the vehicle, and other variables. With the Lyriq, Cadillac is claiming a range of 300 miles, and support for DC 150 kW charging to ensure rapid refills. Mercedes-Benz this week announced its EQS will have a range of over 400 miles, so don't be surprised if the Lyriq's range gets a boost before it reaches production.

GM says it's also entered into a partnership with EV Go, a DC fast-charge network, and tripling the size of EV Go's existing network in the process. One of Tesla's major advantages over its rivals is its network of superchargers across the U.S. and Europe. Cadillac will also be offering Tesla-style over-the-air (OTA) updates for the Lyriq.

Design decisions — All future Cadillacs are expected to have some of the design elements of the Lyriq, including its proportions, vertical headlamp designs, and other details that the company will hope will ensure anyone familiar with Cadillac's design language will recognize it from afar, even in a vehicle they've never seen before. Though the Lyriq is billed as a crossover, its dimensions are nearer that of an SUV.

The Lyriq has a sharp profile and the sort of long wheelbase that's possible when you don't have to wedge a combustion engine under a hood. The interior showed off by Cadillac is suitable luxurious, and includes angular, cut-glass-like dials and buttons, metallic details, and a huge, curved, 33-inch touch display. The glovebox — which slides open like a drawer — is lined with what looks like blue velvet, and looks more like a jewelry box than somewhere you'd likely stash a pack of gum or a paperback.

Managing expectations — GM's also promising a high-level of autonomy from its Super Cruise driver-assistance system that'll handle lane changes and, from the look of the promotional videos, some level of autonomous highway driving. But given there'll be an all-wheel-drive version with nearly 50/50 weight distribution, we suspect we'll be happy to drive it ourselves much of the time.

It's easy to make lofty promises when you’re two years out from production. Will there even be a market for the Lyriq in two years' time? Will there still be a U.S. market? We joke (mostly), but it's hard to think that far down the road given the current climate of insanity. But then, that’s how the automotive sector works. Bending metal is expensive and hard to do at the requisite scale that keeps it profitable. Consequently, doing so effectively requires long-term planning. That's simply the nature of the beast.

No matter what compromises (or improvements) GM has to make between now and the time the first Cadillac Lyriq rolls off production lines, we're excited about what it's shown off today. It's a clear indication — as if we needed any more — the next few years in motoring are set to be exhilarating.