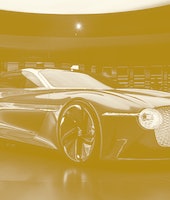 As electric vehicles become more prominent among mainstream brands, luxury automakers have followed suit, committing resources to viable lines of all-electric vehicles. Bentley has a plan to become fully carbon neutral by 2030 through its Beyond100 strategy, and part of that process involves releasing a fully-electric vehicle every year, beginning in 2025.

In a recent interview with Automotive News Europe, CEO Adrian Hallmark, laid out some initial details concerning its first EV that will serve as the launch point of its move towards sustainability. This vehicle, which will supposedly offer a body style in the same vein of the current Bentley line-up (Continental GT coupe/convertible, Flying Spur sedan, and Bentayga SUV), will be equipped with 1,400 horsepower and an acceleration from 0-60 mph in 1.5 seconds.

As things stand for now, that would place the unreleased vehicle at the top of the food chain, as far as specs go. For a point of comparison, the fastest passenger EV models like the Tesla Model S Plaid and Lucid Air Dream Performance, wield 1,020 HP and 1,111 HP, respectively. The former can go from 0-60 mph in 1.9 seconds, while the latter accelerates from 0-60 mph in 2.4 seconds.

Caveats — It is important to reiterate that Bentley’s first EV is not slated for release until 2025, at which point other passenger EVs might catch up to its supposed power. Pricing is also a factor here, as Hallmark noted that there would be a model upon release that would cost about $262,000. That’s almost double the figure of the aforementioned Tesla EVs with similar specs.

Hallmark also touched on the drawbacks of such monster acceleration:

The British automaker’s EVs will be produced in its carbon-neutral factory located in Crewe, England, which received an infusion of $3.4 billion as part of the Beyond100 plan.