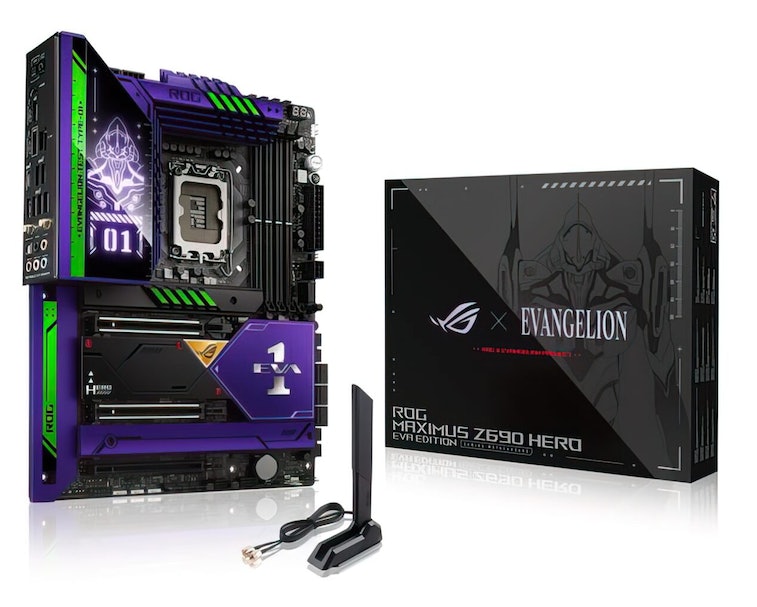 We’re one step closer to being able to build a PC with all Unit-01-themed components. Asus Republic of Gamers is collaborating with the classic anime, Neon Genesis Evangelion, putting out a graphics card and motherboard styled after the Evangelion Unit-01.

Officially, Asus hasn’t actually dropped this collab yet, but they did put out a teaser on Instagram a couple of days ago. It was Twitter user @momomo_us who spotted the Evangelion-themed graphics card and motherboard up for preorder on the Taiwanese online retailer CoolPC’s website.

The color scheme of the limited-edition Asus ROG Strix GeForce RTX 3090 graphics card and the ROG Maximus Z690 Hero motherboard feature heavy purple-and-green designs with accents of red throughout. If this looks familiar, it’s because MSI also recently worked with Evangelion, but their collab included a motherboard, liquid cooler, power supply and PC case that were all similarly skinned to resemble Unit-01.

100 percent synch rate — Now, we get a similarly-themed graphics card to go with all of MSI’s hardware. Asus’ Evangelion graphics card is based on the GeForce RTX 3090, but will most likely have similar specs to other ROG Strix variants, like the white edition of the ROG Strix RTX 3090 O24G graphics card.

Very limited edition — The preorders are still live on CoolPC’s website, but will stop once the 15 units are reserved or if the timer runs out on May 7. The graphics cards are priced at 63,990 TWD or around $2,170, while the motherboard will cost 17,960 TWD or around $609.

According to CoolPC, they will be looking to ship the components around May 16. We’re not sure how many of these Asus x Evangelion PC parts will be made available and in which markets, but it’s a safe assumption that these will sell out fast. Now that we have two hardware makers offering their Unit-01 designs, it’s about time for some Unit-02 colorways.