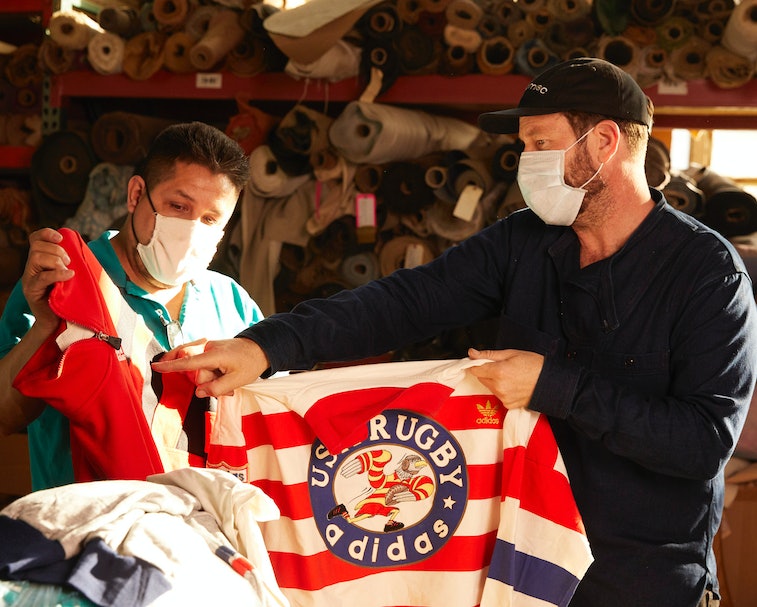 Adidas' Confirmed app has yet to become as widely adopted as the infamous Nike SNKRS, but the brand has cooked up an enticing giveaway to draw people in.

Ten pieces of furniture made from vintage Adidas apparel will be given away next month to users who download the app. Eight chairs and two loveseats were made by Darren Romanelli, better known as DRx, a designer who specializes in making furniture out of upcycled clothing. To help source the Adidas gear for the project, Romanelli enlisted Sean Wotherspoon, the vintage expert and co-founder of Round Two.

The final product remains a mystery — Conspicuously absent in the press materials Adidas provided is any look at the actual furniture that will be given away. Instead, all we have are images of the apparel Wotherspoon rounded up, which include nylon windbreakers, jersey cotton sweatshirts, ripstop shorts, T-shirts, and Adidas EQT apparel.

For an idea of what to expect, we can look at DRx's past creations, like a beanbag made from Adidas tracksuits that released earlier this year. His recent output also includes several chairs made from vintage Jerry Garcia and Grateful Dead T-shirts, continuing the Deadhead trend that's been one of the most defining of 2020.

DRx's process has a digital component, as he makes panels out of used clothing before scanning them and modeling them in 3D in order to create exact specifications. All of his furniture is handmade in Los Angeles, and for the Adidas project, he's used sustainable filling that consists of post-consumer foam and poly beads made from recycled plastic.

How to win — To snag one of the 10 pieces of furniture, you'll need to download the Confirmed app between today and December 6. Adidas will announce the winners at some point in December, and if you're lucky you'll have something to sit on that signals your enthusiasm for jawnz.