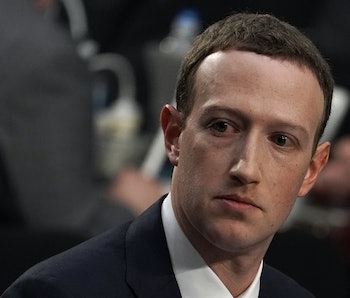 After witnessing the President have a meltdown and threaten revenge on social media companies because Twitter treated him like any other user of the platform, Facebook CEO Mark Zuckerberg has decided to double down on his pay-to-play policy allowing politicians to lie on his website.

Criticizing his rival on the Fox News show The Daily Briefing, the CEO said “We have a different policy, I think, than Twitter on this.” Adding “I just believe strongly that Facebook shouldn't be the arbiter of truth of everything that people say online. In general, private companies probably shouldn't be, especially these platform companies, shouldn't be in the position of doing that.”

Even when discussing competition, Zuckerberg apparently considers his website "everything that people say online."

Poke — Facebook has recently come under fire for shelving efforts by employees to encourage less polarizing and extremist discourse on the platform. Facebook reportedly took this stance because of its executives' obsession with placating right wing extremists who feel insufficiently influential on the site despite being treated like anyone else. Speaking to The Verge, a representative stated "We've built a robust integrity team, strengthened our policies and practices to limit harmful content and used research to understand our platform's impact on society so we continue to improve. Just this past February we announced $2M in funding to support independent research proposals on polarization."

An internal report from the company found that 64% of people who joined an extremist Facebook Group did it because their algorithm recommended it. “Our algorithms exploit the human brain’s attraction to divisiveness,” one employee wrote, adding that the algorithm, if not fixed, would show “more and more divisive content in an effort to gain user attention & increase time on the platform.”

Add as friend — This is likely further efforts on behalf of the company to buddy up with the current government in power despite desperate pleas from consumers and ethicists, who take issue with Facebook's inaction in the wake of unprecedented election meddling. Since Trump is expected to sign some kind of executive order about social media on Thursday, Facebook may think it can use its new friendship with Conservative extremists to the company's favor.

Facebook seems to be an increasingly dangerous actor towards democracy, journalism, and credible information. Even if he's only after money and influence, Zuckerberg would be wise to remember that conservatives won't be in power forever — and unless he wants people in that other political party to demand their representatives regulate or break up Facebook, he'd better show he knows how to lead an ethical company. Undermining society seems like a particularly distasteful move at the moment.

In response, Twitter CEO Jack Dorsey tweeted "We’ll continue to point out incorrect or disputed information about elections globally." In a follow up, he added that "This does not make us an 'arbiter of truth.' Our intention is to connect the dots of conflicting statements and show the information in dispute so people can judge for themselves."