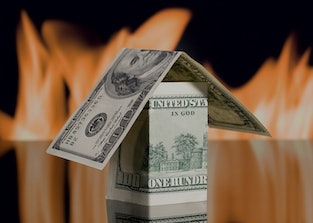 Despite record-breaking high home prices in the U.S. and a ridiculous amount of data about the housing market (all those Zestimates!), Zillow’s foray into flipping houses caused the company to lose $881 million in one year.

Burning this staggering sum of money is quite impressive, considering that American home prices increased an average of 17.5 percent from late 2020 to late 2021, an increase that’s more than twice as large as the typical year-over-year increases seen during the 2010s. But as Americans were engaging in frenzied bidding wars, Zillow’s algorithmically-driven buying process was dropping huge cash on homes left and right.

Its Q4 earnings report, announced on Thursday, reported that the company sold off 8,353 homes within that period and lost $93 million. Lighting so much money on fire in one quarter isn’t good per se, but it’s better than the $240 million to $265 million in losses that the company anticipated.

The rise and fall of Zillow Offers— In April 2018, Zillow entered the on-demand home-buying market with Zillow Offers. But after three and a half years the company announced in November 2021 that Zillow Offers would be closing because it failed to accurately predict movements in home prices.

So now Zillow is selling off its arsenal of homes to buyers that include huge real estate firms like New Residential Investment Corp. and Pretium Partners, The Wall Street Journal reports. According to YipitData, Zillow still has about 8,600 homes in its possession.

Seeing a company flush $900 million down the toilet in a year makes you wonder how closely humans were monitoring the algorithmic home-buying process. Shouldn’t someone have spoken up a little earlier? AI isn’t some magic bullet; rather, it’s a product of the people that shape it and the data that feed it.

Pretty good otherwise— Zillow, which makes money from advertising (and the slew of other companies it has acquired), had impressive earnings, despite the home-flipping flop. Revenue for Zillow’s core feature — home listings — rose by 30 percent in 2021.

“Our company was built on big swings and we’re going to keep taking them,” Zillow CEO Rich Barton said in the earnings call.