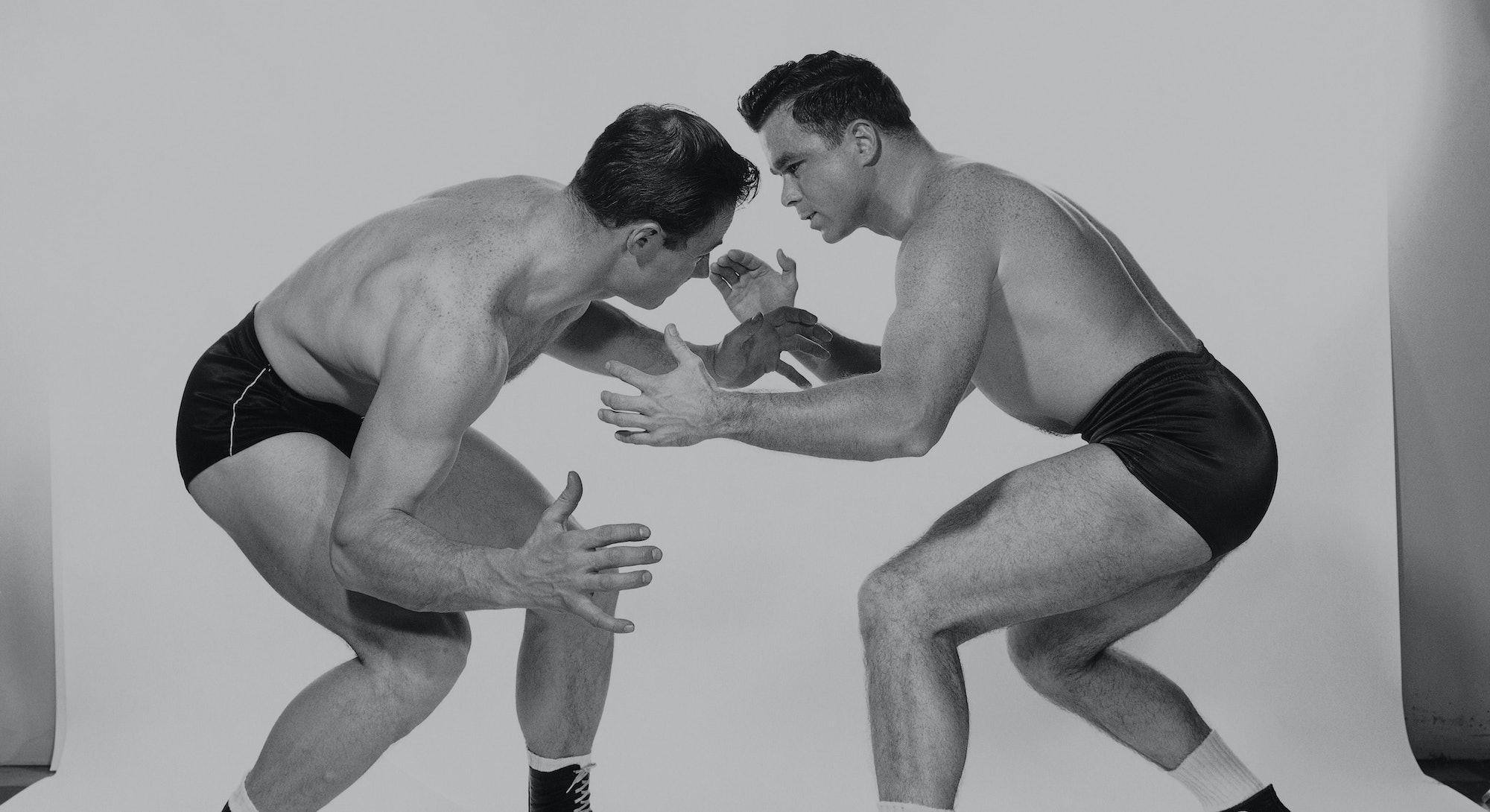 For as long as he can remember, Glenn Cerner has had a strong foot fetish.

“For some reason, I like to see the feet soiled filthy black on the bottoms,” the 62-year-old, who works two nursing jobs in intensive care units at Illinois hospitals, tells Input. (Cerner isn’t his real name; he asked for a pseudonym to talk more freely for this story.)

Cerner, who paid his way through a four-year marketing degree and nursing school by working midnight shifts as a short-order grill cook, felt unable to tell others about his interest in feet — nor the fact that he is gay. In the 1970s and 1980s, when Cerner was going through school, homosexuality was frowned upon, and attitudes toward gay men only worsened at the height of the AIDS epidemic.

“I got hooked [on wrestling] as a way to see bare feet on beefy, good-looking men.”

But he was able to share a love of wrestling with his peers. “Wrestling with buds and watching TV was a good outlet at a repressed time in history,” he says. As he was growing up, watching pro wrestling was an easy way to assimilate, while at the same time exploring his sexuality. “I got hooked,” he says, “as a way to see bare feet on beefy, good-looking men.”

In the 1970s, he’d watch matches featuring Eric Froelich, a German-born pro who had a 22-year career, mostly in Canada, and wrestled barefoot. By the 1980s, Kevin Von Erich, whose father Fritz Von Erich operated World Class Championship Wrestling in Texas, was the focus of Cerner’s attention — because he also wrestled barefoot. In the 1990s, Cerner shifted his attention to Bob Bradley, a “tough barefoot dude,” and Rocky Mountain Thunder, a burly grappler who would rub his bare feet on his opponents’ faces while stretching their arms.

Several matches stick out in Cerner’s memory: Von Erich versus “Wild” Bill Irwin, because of Irwin’s prolonged handling of Von Erich’s feet while the former was in a scissor hold, and Von Erich versus Frank Dusek in a match from 1982, because of the way Von Erich stamped down on Dusek’s face. “I always wondered about the feet on the mats, mats getting foot stink, then their sweaty torsos on the mats picking up the stink,” says Cerner.

And thanks to YouTube, he can pull up many of these matches in an instant. Cerneris one of a raft of middle-aged men who congregate in these videos’ comment sections to share their sexual interest in the grapplers onscreen. These men are known in the wrestling world as jobber fetishists.

Jobbers are the perpetual losers in pro wrestling: the guys hired in local towns to make the big-name wrestlers look good. And seeing them beaten from pillar to post within the squared circle is an infatuation among many gay men who inhabit the YouTube comment sections of the jobbers’ old matches.

“Steve Dane always wore the white trunks which always showed off his package,” writes one commenter of their favorite wrestler. Another, commenting on a match between two WWE wrestlers, says “Oh wow two very hot sexy wrestlers and I be [sic] the next weak jobber in line for this beat down.” And those are some of the tamer comments.

One regular commenter, Danny Rogers (again not his real name), grew up in the South before moving to the East Coast as an adult. Now 48, he runs Humiliation of a wrestling jobber, a website where he publishes fiction about “a jobber who suffers humiliation, trunk pulling, domination, and degradation in the ring.”

“Even at a young age, seven or eight, I was enthralled with those guys,” says Rogers, who has only ever had sex with women. He says he has no sexual attraction to men, but is drawn to the humiliation the jobbers face. “I loved seeing them beat up, slammed, thrown around, slapped, humiliated. I'd get annoyed when a match involved two stars; I wanted those guys in skimpy trunks” — i.e., jobbers — “losing in three minutes.”

As wrestling began to boom in the 1980s, so did the prevalence of jobber matches. Rogers’ interest in the sport grew during that time, too. “WWF Superstars, Wrestling Challenge, Prime Time Wrestling shows, and the TBS shows on Saturdays especially featured squash match after squash match with jobbers who became so infamous that wrestling fans are still jerking off to them 30 years later,” he says, naming the likes of Tommy Angel, Bob Emory, Red Tyler, Trent Knight, Kenny Kendall, Joe Cruz, Cougar Jay, and Reno Riggins.

For anyone familiar with pro wrestling, the idea that muscled men in Speedos could be perceived sexually isn’t exactly a surprise. “There is a long history of wrestling and bodybuilding being used — especially magazines — as kind of covert gay erotica,” says João Florêncio, senior lecturer in history of modern and contemporary art and visual culture at the University of Exeter and coordinator of the Exeter Masculinities Research Unit.

The connection between pro wrestling and sexuality stems back to the 1970s, when “gay men moved to dissociate themselves from certain stereotypes of what a gay man was, and started cultivating for themselves a kind of hyper version of masculinity and what it looks like,” Florêncio says.

Some sectors of the wrestling world are less covert about their sexual utility. There are specialized websites that offer paying visitors more suggestive wrestling matches. One grappler who works in both mainstream pro wrestling and the “underground” custom wrestling scene is Cameron, a 36-year-old who grew up in small-town Maine.

“Maybe being a jobber is having the power to give up the power.”

Cameron began wrestling when he was 14, and has competed across the U.S., Canada, and England. When he was 18, he was approached about making a video of himself getting beaten up. “From there, I ran with it,” he says. “I loved to ‘sell’ the pain of the move or take the move bigger or wilder than anyone else. And I could get recognition for doing so.”

Now, Cameron runs Wrestler4Hire, a website that sells those custom matches. “I've heard many stories from friends and fans about their childhood where the ‘cool’ kids or ‘jocks’ would be wrestling them and dominating them, which they thought was great,” he says. “They may even have gotten erect, but the jocks didn't say anything. I think you'd find that being gay was very common back in the day, but obviously less accepted than it is in our current culture and climate.”

He’s also sold content to guys who admit to having power all day, every day, and wanting to relinquish it to someone. These men, he says, live vicariously through jobbers. “Maybe being a jobber is having the power to give up the power,” he says.

Custom wrestling content has its audience, but the ease of access to old wrestling matches that reignite younger memories — for free — is obviously very attractive. Cerner and Rogers both tend to focus on matches from the mid-1990s and earlier, before wrestling became totally mainstream and super-brash. “The pro stuff with loud music, fireworks, and so on turned me off,” Cerner says. “I just want to see two muscled bros on the mats in holds, sweaty and suffering.”

For Rogers, the increasing competitiveness of pro wrestling in the 1990s, when two major companies — World Championship Wrestling and the World Wrestling Federation (now WWE) — vied to win the “Monday Night Wars” TV ratings battle was a turnoff. “I didn’t care about WrestleMania or the Royal Rumble or King of the Ring,” he says. “Just give me squashes.”

(A squash match is what it sounds like: a star wrestler is given several minutes to squash their weaker, jobber opponent. It’s designed to make them look good ahead of a higher stakes match against a bigger name foe.)

For Cameron, the evolution of wrestling that mostly ended jobber matches is a shame — and an indication of a broader shift in psyche. “American culture — and certainly other cultures — no longer wants that underdog story, or they don’t relate to an underdog,” he says. “They want winners. People who succeed.”

Cerner — under his YouTube username, another pseudonym — has become a notorious figure within the non-sexualized wrestling fan world. “I think everyone who uploads wrestling videos to YouTube has had at least a dozen comments from [Cerner] and probably at some point decided to block him,” tweeted one user. But it’s not just on everyday wrestling channels that the jobber fetishists congregate: They have channels of their own.

Sean Pford, a pseudonym for a 42-year-old from Iowa, runs a YouTube channel and a website, Inner Jobber (tagline: “Because vulnerability is sexy”), both devoted to jobber fetishes. The YouTube channel, which collates playlists of beefy, muscled men broken down by other wrestlers, has 7,500 subscribers. Its most watched video — of John Cena battling Dave Bautitsta — has more than a million hits. Some videos focus on repeated crotch shots; others simply let the matches play out and let viewers go to town in the comments section.

Pford started watching wrestling as a kid in the 1980s because of his older sister’s interest in it. He inherited his sibling’s fascination with Bret Hart and Brutus “The Barber” Beefcake, but it was the jobbers on whom he lingered longer. “My favorite Star Wars characters were the Gamorrean guards, so I guess I've always liked the underdogs,” he admits. When he got older, Pford stopped watching wrestling — in large part because he came to the realization he was gay. “What used to be perfectly innocent matches were making me feel things,” he says.

Growing up in a conservative environment, he wanted to avoid proving the bullies who tormented him right. But when he finally came to terms with his sexuality, he started watching wrestling again, and interacting with others online.

“I just couldn’t believe there were other people like me.”

He started posting comments on other people’s websites, then started up his own, and expanded on it by uploading his favorite matches to YouTube. The shift to the video platform brought him a bigger audience, he says.

“I tried not to label or describe the videos in such a way that might keep away straight fans,” he says. “It’s for everybody. There may be things in professional wrestling that gay men — and straight women — can get out of it that others don’t, but everybody can still enjoy it, on different levels, at the same time.”

The two groups — wrestling fans there for the action and jobber fetishists there for the kink — often collide in the comment section of the videos. “Sometimes a person not into jobbers puts up a match, and all of a sudden the video is overrun with us jobber-loving perverts commenting on Bob Emory getting the shit kicked out of him,” says Rogers. “It can be comical when the worlds interact.”

But it can also be sweet — and a support system of sorts for a generation of men who often felt ostracized from society. “A lot of guys met other people in [the comments section] by realizing, ‘Oh, that guy likes this match for a reason that I liked it too. Interesting,’” says Rogers.

“Often they’ll read a comment, and it sparks another memory, and it kind of encourages them to reveal something about their kinks or love of jobbers,” he adds. “You’re around — virtually, at least — other people into the same things as you, so it’s naturally going to bring you out of your shell and give you the chance to share more of your feelings.”

“Millions like it for the storyline and to see the Million Dollar Man be an arrogant prick with that character,” he says. “But it also makes total sense that it gets a lot of guys hard.”