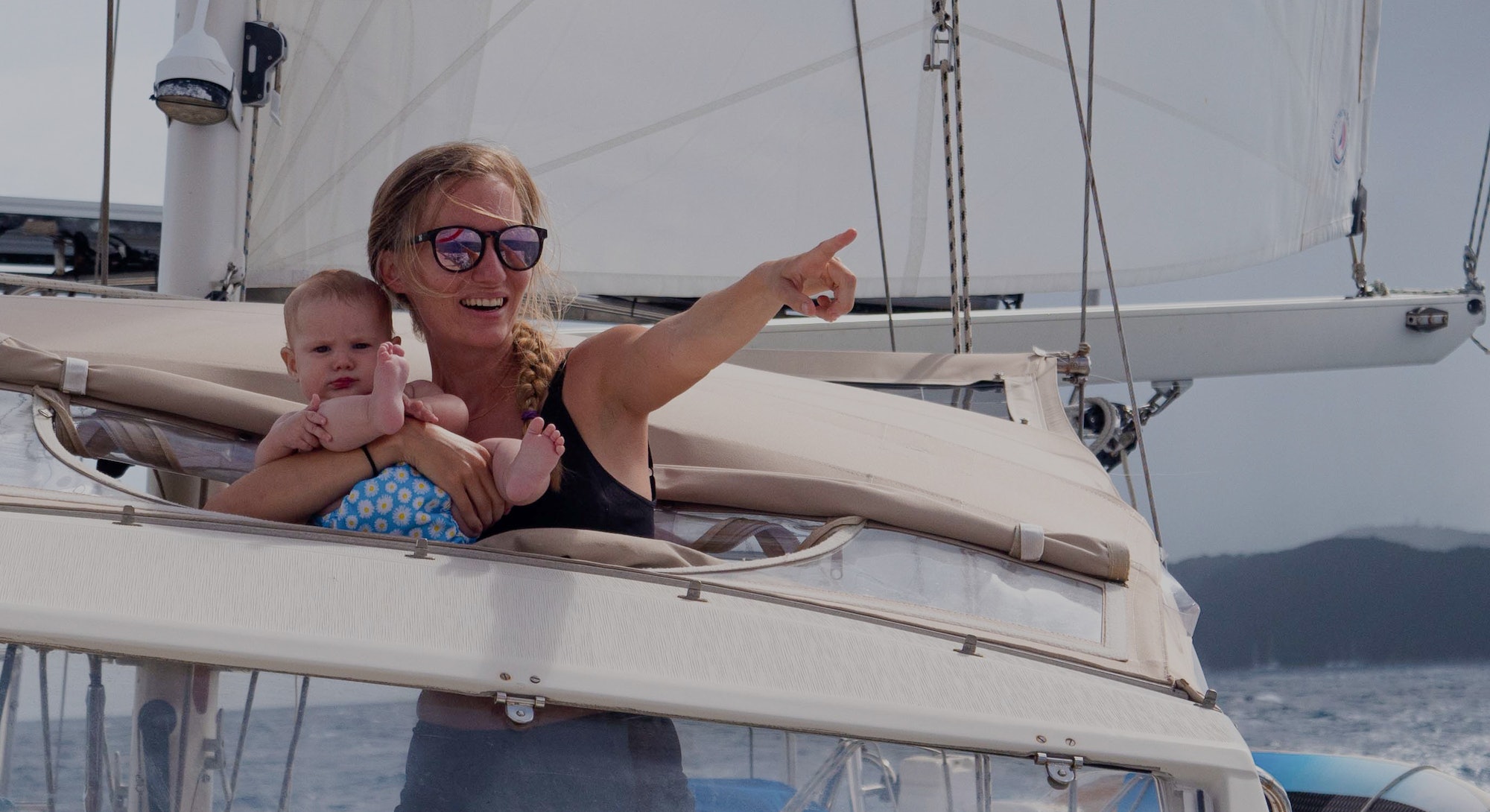 Vlogger Karin Trautman, a 33-year-old native of Sweden, met her now-husband Brian in New Zealand in 2011. She quickly fell in love with him — and his seafaring lifestyle.

The couple have spent the last decade on the ocean on their four-person sailboat the SV Delos, making a name for themselves on YouTube, where their channel now has 787,000 subscribers.

Their videos, which both Trautmans shoot and Karin edits, feature sun-soaked days on deck, visits to remote island paradises, plus cave diving and other underwater escapades. They are constantly welcoming different crew members aboard.

Although their past journeys might have looked idyllic, they were often grueling. “The craziest experience was coming across the Northern Atlantic in a big storm,” says Karin. “The waves were breaking over the solar panels, the autopilot wouldn’t work, and I’ve never heard such intense noises on Delos. The wind was howling. It was so mentally intense.

“I’m such an anxious person, so to have just pushed myself and survived, it was really special,” she continues. “I was so proud of everyone. But that’s how we used to sail, before we had Sierra.”

The Trautmans’ toddler daughter Sierra has barely known land; she boarded the SV Delos at just four months of age in 2020. And the couple are not alone in the (largely white) world of boatfluencers — more and more of them are starting families and traveling the world with their kids. Which means women like Trautman are learning to navigate the challenges of motherhood as they navigate the ocean.

These boat moms face difficult conditions, logistical nightmares, and feelings of isolation — hurdles they must overcome to retain their vlogging income, made mostly from YouTube ads and Patreon, and continue their adventurous lifestyle.

Lauren Schroeder, a 36-year-old boatfluencer from Wisconsin, and her husband spent the better part of a decade working, saving money, and diversifying their portfolio to sail full-time, eventually steering their boat across the Great Lakes and even out to the Bahamas. The couple’s YouTube channel, Sailing Soulianis, currently has 96,000 subscribers. When they had their daughter in 2020, things became tougher.

Trautman has also experienced difficulties. “It was quite a nerve-wracking time,” she says of taking to the water with Sierra, “and I’m quite an anxious person anyway.” As a first-time mother, she found it challenging to be away from a wide support network and couldn’t always contact people for help when she was feeling anxiety.

“Usually, I like to push myself and put myself out of my comfort zone, but after we had Sierra, it was really hard,” she says. “You start to see all the dangers and all the problems in a lot of things.”

With older children, providing them with a proper education can be hard. “We don’t really do school when we’re sitting in big waves and 30 knots of wind,” says Brooke Palmer, a 35-year-old photographer who has been vlogging life on her 55-foot trawler boat, Mermaid Monster, for the last four years. (Her YouTube channel, which she runs with her husband, has 37,000 subscribers.) “But when it’s not bad weather, I spend the day teaching the kids,” who are ages seven and nine.

Palmer also makes sure her kids can socialize, arranging regular trips home where they meet with friends. Juggling these responsibilities with boat life can be tiring. “I’m currently pregnant, too, so that adds a whole other layer of exhaustion,” she says.

“But if my two options are being bored in a house or being seasick out here on the ocean, I’d choose the water without a doubt,” she adds. “I like the adrenaline rush.”

For Trautman, becoming a mother has involved a steep learning curve. “I’m doing the research to figure out what we need to do when she hits a certain age, like buying shoes a size too big for when she grows out of her current ones,” she says. The Trautman boat’s on-board washing machine, which allows them to use cloth diapers, has been a lifesaver.

The biggest logistical challenge, so far, has been feeding her toddler. “When she started tasting food and eating, I didn’t know much about it, and we were in lockdown,” says Trautman, who was grateful that she was able to breastfeed, as it bought her more time to plan. “One of our followers is a pediatrician, and I’ve called him so many times to ask about stuff, like ‘What about Iron?’ and ‘Is she getting enough of this?’ He’s super-cool.”

Although Trautman feels fortunate to have such supportive fans, she’s often found herself worrying about follower retention, given her dramatic change in lifestyle. “The channel was about this group of young people doing all these crazy adventures. So I was very nervous [after Sierra was born]. I wondered if anyone would be interested,” she says.

So far, she’s been pleasantly surprised. “Seeing the incredible response that we got from people, it was just mind-blowing. It turns out a lot of people like children! It helps that Sierra is a ham on the camera, too. She loves it.”

Not everyone, unfortunately, is quite as supportive. “I think a lot of people love the baby; they think she’s adorable. Then there are the other people who are like, ‘It’s way too much baby!’ because we haven’t gone as far in the boat,” says Schroeder. “I’m sure we’ve lost people, like a lot of the hardcore sailors.”

Schroeder says she’s found it difficult to edit and release high-quality vlogs while caring for her daughter and helping on the boat, and her channel’s output has dropped. But she won’t let that stop her. “You’ll have people who are upset with you, who wish that you were back in the old days being a couple or however you were before,” she says. “But you can’t really do anything about that, because you can’t let your online platform dictate your own real life.”

Trautman, for her part, doesn’t know where her real life is headed. “My daughter might not want to be on-camera when she gets older, or even live on a boat,” she says. “Things are going to be fluctuating. It’s good for me to have that in my mind.”

She’s just trying to enjoy the ride while it lasts. “It’s like a roller coaster. You have really high highs and pretty low lows,” Trautman says. “But being a family on a boat is really special. I love it.”