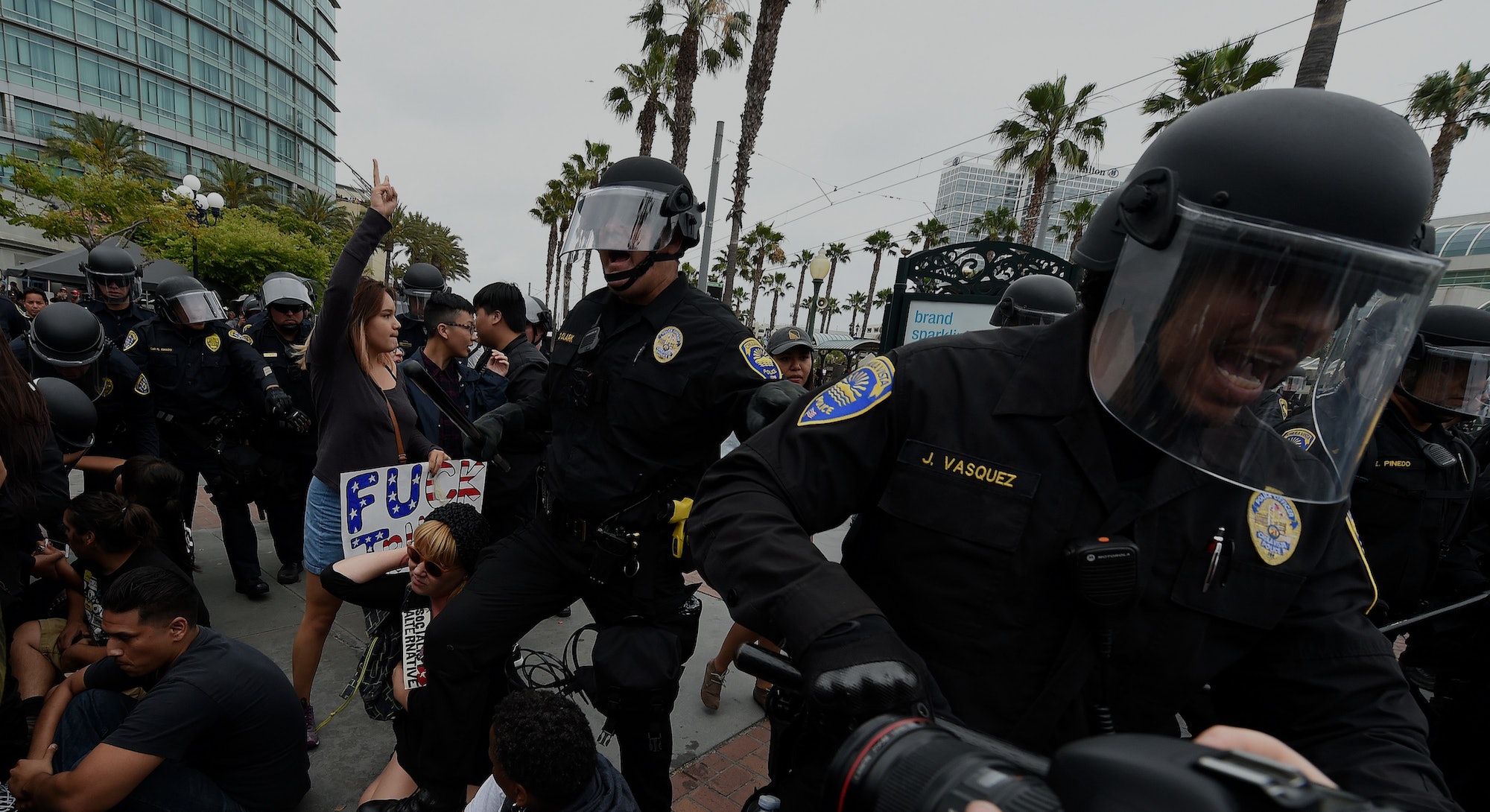 Just like every other major city in the US, San Diego saw massive protests daily in June, huge protests weekly in July, and dwindling protests in August, September, and October. The police, however, have continued to show up en masse and pay everyone overtime (including racking up a $1000 bill for sushi), fire chemical irritants, and occasionally grab individuals from crowds at random. Where SDPD are more innovative is in what they do after that. According to a complaint filed by the ACLU, SDPD have been taking protesters’ phones before the protesters are booked in, avoiding having them logged as evidence, and then keeping them when protesters are released.

One of those protesters, called Jed, had his phone confiscated by SDPD after initially having it logged as a personal possession (possessions are returned after a person is released, evidence is not). Jed was arrested on August 28th and then placed in the SDPD parking structure, where his possessions were taken, listed, and bagged. He declined to have his phone turned off. “It required me to do my code,” he said. He felt that inputting his password would let SDPD “look at the security camera footage” and access his phone. It turned out that, code or no code, SDPD would be looking through his phone.

Eventually, Jed was taken out of the garage for interrogation by both local and federal law enforcement. “It was after the interrogation with the FBI guy, maybe it was during it, [an SDPD officer] took my phone out of my bag. I told them they aren’t allowed to search my phone, that’s a violation of the 4th amendment. She just said 'no' and she walked out.”

At some point, the word “phone” was crossed off the property list on Jed’s booking intake form.

At some point, the word “phone” was crossed off.

When Jed was released, he tried to log out of the accounts on his phone. “I forgot my Facebook password. That’s when I realized something was wrong with my head; I probably had a concussion. The fact that I just forgot that was really fucking weird for me,” he said. Later, he was able to log out of those accounts. He showed up at SDPD HQ three days later and was eventually able to track down the investigating officer who “explained to me that he is not going to release it because the DA said not to.” When asked, SDPD was not able to find any emails or communications between this officer that the DA’s office regarding this case. Jed recalled the officer being named Bishop. SDPD has no records of emails from officers with that name but, according to LinkedIn, Dean Bishop is an SDPD officer.

Later that week, Jed started seeing emails suggesting that apps on his phone had been accessed from IP addresses in Riverside and Los Angeles county. Andrés Arrieta of the Electronic Frontier Foundation explained that this means SDPD had cracked Jed’s phone. It is possible that they used GrayKey, a highly controversial phone hacking tool that they obtained, without notifying the Council, thanks to a donation from the San Diego Police Foundation — which one officer called “borderline unethical."

Arrieta explained, “the way these apps [like GrayKey] work is that they make a copy of all the data they can get. Then they work on that as a folder. They send that to whomever is doing an investigation. They put that in a virtual server and boot it up.” Alternatively, SDPD could have outsourced the cracking of the phone to a contractor — but this seems less likely, given that SDPD could find no records for any documents related to sending the phone, or copies of its data, anywhere. They also found no records for GrayKey, despite an NBC investigation conclusively proving SDPD own and use the program. The FBI has not yet responded to a request for comment.

According to Jed, the phone’s GPS chip showed its location to be at the SDPD headquarters at the time the apps were accessed in LA. It’s most likely that a copy of the phone’s data was opened at a fusion center in Los Angeles.

Jed was far from alone, In a letter dated the 24th of September, the ACLU, local nonprofit Moral Governance ,and Singleton Law sent a letter to San Diego’s police chief, DA, and city attorney outlining their concern that phones had been held for over a month after individuals were arrested and bailed out or released without charge. Given how widespread the practice was, the ACLU stated “It appears this is not the result of isolated decisions by individual officers. Instead, jails have apparently adopted either a written or de-facto policy of seizing protesters’ cell phones and refusing to return them upon release.” The letter also stated that, in many cases, the phones were taken before protesters were booked — meaning they show up on no records and are next to impossible to reclaim, even if the arrested people were released without charge.

“Jails have apparently adopted either a written or de-facto policy of seizing protesters’ cell phones and refusing to return them.”

In a statement, Shawn Takeuchi, an SDPD spokesman, said “The department will collect any and all evidence related to a crime and/or arrest of a person. We have a duty to collect evidence legally so that it is admissible in a court of law. In some instances, cell phones of those arrested at protest locations have been impounded as evidence. We always need a warrant to search the contents of a cellphone, however, exceptions do exist such as a person with a 4th waiver probation condition.”

News of this practice has spread quickly through the local protest groups. With many using a screensaver of a black screen with white text reading “Get a Warrant” and listing a relevant case (Riley vs. California, 573 US, 2014). In that case, the US Supreme Court concluded that warrantless searches of an arrestee’s phone was illegal under the 4th Amendment. Police are, in fact, required to get multiple warrants to search phones in most cases. Because warrants are most often location based, one warrant covers the device itself and another covers cloud based apps on the device.

In some cases, such the one Takeuchi noted where a person on probation has a reduced right to privacy under the 4th Amendment, the warrant may not be necessary. Takeuchi noted that “Warrants are public documents unless sealed under judicial approval.” A search for applicable warrants using Jed’s case number revealed nothing. Neither Jed, nor any other protester I spoke with, was on probation and Jed has not been notified of a warrant to search his phone. Several other protesters told me they had not been made aware of warrants on their phones but had also seen logins from as far away as Phoenix. Either SDPD or the FBI has been able to obtain dozens of sealed warrants — or they are acting in direct contravention of the 4th Amendment.

Jed, like others, has been able to obtain a new phone thanks to the support of mutual aid groups. As he noted, “It’s very much a nuisance to not have a phone. Anybody who has dropped their phone in a toilet knows that. At the same time, I need to worry about the government being all up in there.” He is one of at least ten protesters whose phones have been retained, some of whom have been released without charge.

At the least, taking those phones represents a massive inconvenience. However, more likely it represents a coordinated assault on the 4th Amendment by federal or local law enforcement.