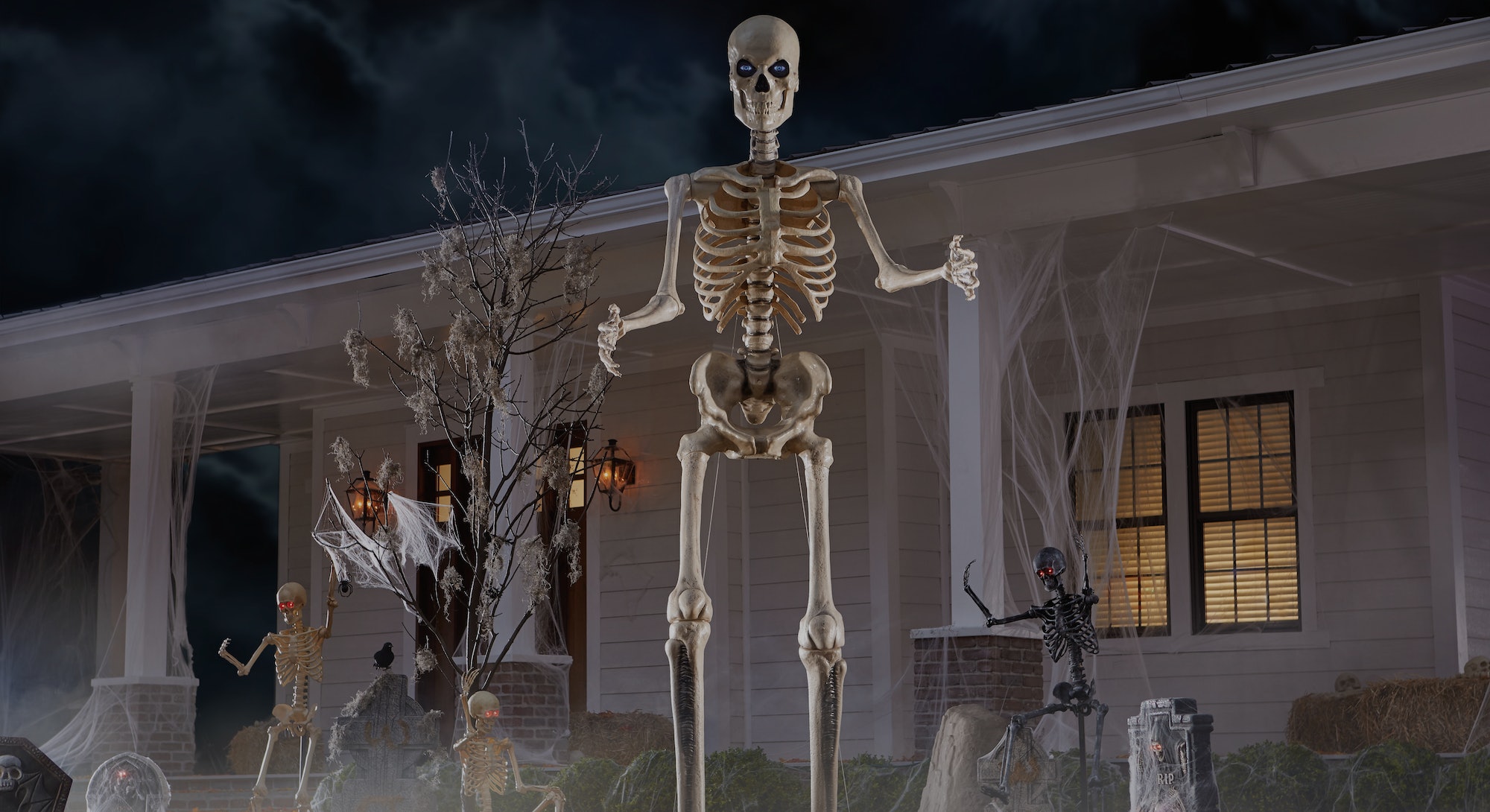 Halloween is objectively the best holiday, as evidenced by the fact that it comes with its own built-in masks — effectively making it COVID-proof.

But while the world is bad (like really, really bad) Home Depot's twelve-foot skeleton makes the pain of the living worthwhile. Even if it's sold-out nationwide.

He or she or they — it's up to the skeleton really! — first clacked into our life via memes on TikTok and Twitter made by those that first encountered the glorious creature in the wild. After obsessively tracking its every spooky move, we decided to reach out to Home Depot, creators of 2020's savior, to ask every question we had about our calcium king.

Home Depot: Our team was excited to bring the 12-foot skeleton to market this year and we knew it would get some attention, but we are blown away by customers’ enthusiasm. It’s been awesome to see the reactions online and in stores.

Ryan: Who came up with the skeleton? How was it conceived?

Home Depot: Our Holiday team was inspired by visiting several haunted houses and seeing what concepts sent members of the team running away. We then created the concept in an ideation session, where we wanted to see how big was truly big!

Ryan: How is the giant skeleton made?

Home Depot: Supernatural powers helped create the giant skeleton. In addition to that, we may have mastered the process of injection and blow molding to create the real-bone look.

Ryan: How many have been produced?

Home Depot: That number is a closely guarded secret, but I’m sure you’re likely to see a few in your local city or neighborhood this Halloween.

Ryan: What is it made of?

Home Depot: People might be surprised to learn that it’s largely made of calcium and collagen! Only joking. It’s actually made from steel, blow- and injection-molded plastic, and two LCD screens.

Ryan: Is the skeleton based on anyone in particular?

Home Depot: We can’t give out names for privacy reasons, but let’s just say it was inspired by someone with incredible bone structure.

Ryan: How was the model generated?

Home Depot: We do a lot of work with clay to ensure we get every last detail correct. When you’re 12-feet tall, people notice you!

Ryan: Does the skeleton have a proper name?

Home Depot: We encourage customers to name their skeleton so it really feels like part of the family. Some suggestions to get started are Ulna, SkelaTori, Holmer Bones, and our favorite Skelly.

Ryan: Why does the skeleton have LCD eyes? Is there any purpose beyond being spooky?

Home Depot: The LCD screen “Life Eyes” move and blink to create a creepy, spine-tingling reaction, but we also like to think it helps the skeleton keep watch of the neighborhood.

Ryan: What should people do with their skeletons after Halloween? Will you sell a giant Santa hat for it? Does it need to be buried in a massive grave?

Home Depot: That’s completely up to the customer. Some will lay the bones to rest until next year, while others may make a pumpkin patch and leaf pile at its feet for Thanksgiving or put on a Santa hat and drape it in lights for the holidays. If it’s in a tux or dress for New Year’s Eve, then I’ll really be impressed!

Ryan: Will there be other skeleton creatures or friends for it?

Home Depot: The Grave ‘N Bones Halloween collection includes a variety of standard-size posable skeletons as well as creatures including the skeleton pony, skeleton greyhound, and howling skeleton wolf. The smallest of them all is the 7-inch animated LED skeleton mini dog.

Ryan: What is the skeleton's shoe size?

Home Depot: That’s a good question. Whatever the shoe size, it would be a custom order for sure.

Ryan: How many bones are in the giant skeleton?

Home Depot: The human body has 206 bones, but the 12’ skeleton doesn’t quite have that many because we want to ensure you can spend more time in your yard admiring him vs. assembling him.

Ryan: Is the giant skeleton waterproof?

Home Depot: The giant skeleton is weather-resistant, so it can be used indoors or outdoors.

Ryan: What did the skeleton do before it was a skeleton? How did the giant skeleton die? Is there a canonical explanation?

Home Depot: Wait a minute…who said the skeleton died? Those baby blues look alive and well to us.

Ryan: Could the skeleton's ribs be used like a xylophone or would it break?

Home Depot: The skeleton is designed to withstand far more than the taps of a xylophone stick, however, you will not get the tune you desire from this particular product.