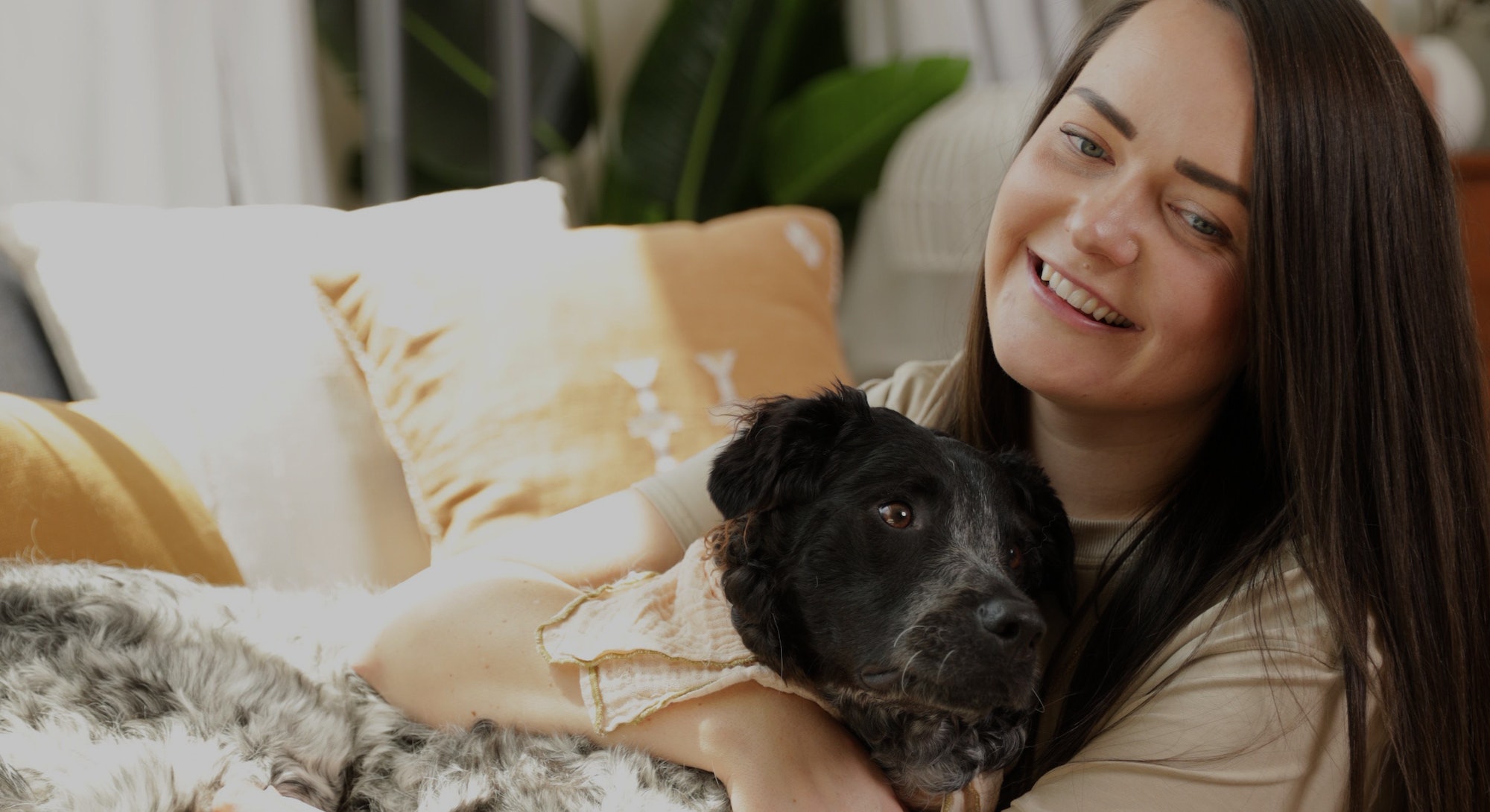 At the end of 2021, Liz Giorgi needed to travel to Africa on short notice. Her father had died unexpectedly, and she and her husband were headed to Kenya to scatter his ashes.

With their usual dog boarders booked up, the pair decided to get a sitter through the dog-walking app Wag, which they’d used without issues the previous summer.

The Colorado couple did a site visit with the sitter before they left and gave detailed instructions on how to care for their two dogs. They were especially concerned about Fran, their Border Collie mix.

In January 2020, Giorgi and her husband had adopted Fran, then just nine weeks old, from a rescue shelter to help them heal from a tumultuous year in their relationship. The Giorgis saw Fran, a sweet and intelligent dog, as their child, and credited the canine with getting them through lockdown and saving their marriage. They didn’t hand her over lightly.

Reassured by the resume of Fran’s sitter and positive Wag recommendations from friends and colleagues, the Giorgis set off for Kenya. By the time they landed and switched on their phones, Fran was missing.

“I had a message from the walker saying that he lost Fran and he was working on getting more information,” says Giorgi, the 35-year-old CEO of virtual photoshoot platform soona. She quickly mobilized her family and friends at home to help with the search. “We were devastated,” she says. “It’s your worst nightmare to get that kind of news.”

There was no emergency line in place for dog losses at Wag, and Giorgi struggled to contact the company. After five days of fervent social media campaigning, which Giorgi orchestrated via Twitter from Kenya, Wag sent a professional dog tracker to Colorado. Fran was found dead that same day.

“They call you. They don’t apologize. They say that on rare occasions, these things happen,” recounts Giorgi, who has been campaigning for justice online ever since Fran’s death. “They offer to pay for the cremation costs of your dog in exchange for an NDA. They believe that the cost of their mistake is about $250. Who knows how many dog owners they've bought off?”

Given those NDAs, it’s hard to say how many dogs have died under a Wag walker’s care, but Giorgi is certainly not alone in her situation. In 2019, a couple went to the press about Wag’s offer of cremation in exchange for signing an NDA after their dog was killed on a walk, and a Floridian user spoke out when her Wag walker returned with her dog’s lifeless corpse, a scene caught on her doorbell camera.

According to the New York Post, between 2015 and 2019 at least 15 dogs had been killed or lost under Wag’s care. The company is the subject of two class-action lawsuits: one over pay violations and one over its poor vetting of staff.

“I feel like some people don’t take it seriously and just slack off or do the bare minimum because of the low pay.”

Giorgi and Wag contractors who spoke to Input indicate that things haven’t improved with Wag. Walkers claim the app is bug-riddled and charge that the company offers freelancers low wages and puts pressure on them to maximize their workloads. All of this, they say, is a recipe for disaster.

Wag Labs Inc., founded in 2015 and currently run by CEO Garrett Smallwood, is a California-based company with walkers in 4,600 cities across all 50 states. Wag expects to generate $42 million in revenue in 2022, a 120 percent increase over last year, and has plans to go public after merging with CHW Acquisition Corp. It takes a 40 percent cut from the pay of its walkers, who earn $40 an hour on average.

“I feel like some people don’t take it seriously and just slack off or do the bare minimum because of the low pay,” says Alyssa, 29, an experienced dog walker from Utah who uses Wag to earn extra income while she focuses on her mental health. (Input is withholding the last names of walkers for their privacy). “A lot of people take this as a side gig without any experience,” says Alyssa, who adds that Wag’s screening process doesn’t test for walker expertise or what a prospective contractor would do in an emergency.

Emily, a 39-year-old dog fulltime walker from Illinois who has a five-star rating on Wag, was also surprised at how easy it was to become a walker through the app and agrees it attracts inexperienced people. She thinks the issue is further compounded by a lack of information on the dogs in need of walking.

“You can’t see previous notes that the other walkers have put out there until after you agree to a walk,” she says. “There are plenty of times I’ve taken a walk only to look at those notes and find out that the dog is a hellion — and Wag only added that notes feature at the end of 2019. It makes you feel like they don’t care about your safety and wellbeing.”

While a lack of information certainly increases the risk of accidents, experienced walkers feel the structure of the app and the low pay it offers put them under pressure to stack up walks, thus making things more dangerous. “Sometimes I book walks really tight to each other, and I’m late and exhausted. It gives me so much anxiety,” says Alyssa. “But if you haven’t done walks for a while, someone might not find you as a new walker. I need the money, so I try to fit in as much as I can.”

According to Ray, a 21-year-old nonbinary college student and Wag walker from Pennsylvania with six years of dog-walking experience, the Wag app penalizes caregivers for inactivity and cancellations. This, they say, forces walkers to take on clients even when they shouldn’t.

“If you cancel, the app makes it so you can’t accept other walks that day, and if you cancel too many, you can’t accept walks for a week,” says Ray. (Emily also tells Input that Wag was going to penalize her for organizing days off in advance, like her birthday, until she asked clients to cancel bookings for her instead.) “For people where this is a primary source of income, it can be really problematic,” Ray adds.

All three walkers Input spoke to agree that the issues they’ve laid out make mishaps more likely. “We’re overwhelmed. Accidents can easily happen, even if you're a very responsible person, because you're not in the right state of mind,” says Alyssa.

Emily thinks bad outcomes are inevitable. “You hire people who aren’t going to care because of the low pay and conditions,” she says. “If you think it’s not connected to accidents, you’re not paying enough attention to the way the world works.”

Although the walkers Input interviewed say they have never lost a dog, they have experienced glitches with the Wag app — a common occurrence they say would make lost dogs difficult to trace. “Recently it’s not even showing how far we walked and how many minutes we did,” says Alyssa, who uses external apps to help owners track her movements.

“They treat dogs like they’re a random commodity with no value, not a living being.”

Ray has faced similar problems. “It’s said I’ve walked 60 to 80 miles before, which I obviously didn’t. Once it said my walk lasted three days. It’s also not recorded the time or location of my walks well at all,” they say. “I’ve never had it actually matter, but I can see it being a problem if a dog were to get loose.”

Like Giorgi, walkers who use Wag feel unsupported when they need help. “By the time you’re talking to a real person, you’ve either figured out the issue on your own, or it’s too late,” says Emily, who adds that Wag’s emergency line once hung up on her when she was locked out of a client's house.

Alyssa also has had bad experiences communicating with the company. “I wouldn't go to them at all if I lost a dog,” she says. “I feel like there’s not much they could do.”

While the company did not respond to Input’s questions about the issues its walkers had raised, it did provide a statement: “Safety is a top priority at Wag! and every service is insured and backed by the full support of our Trust and Safety team. The team worked diligently with Fran’s emergency contact and pet parent, as well as the local community, to search for her and bring her home. This tragic incident is still under investigation, and the pet caregiver has been suspended from our platform pending the conclusion of an investigation.”

Giorgi is still distraught when she thinks of Fran and the way Wag has handled her death. “They treat dogs like they’re a random commodity with no value, not a living being,” she says. But the startup CEO feels it’s important to keep discussing her loss, even if it hurts. “I will not stop talking about my dog. Fran was my first child,” Giorgi says through tears. “I miss her every day.”

She doesn’t blame the walker and doesn’t want action taken against them. “I feel that it was the company’s lack of help, support, and resources for that person that caused this tragedy,” Giorgi says. “If you're taking a cut of these dollars, you are responsible. You don't get to abdicate that responsibility.”