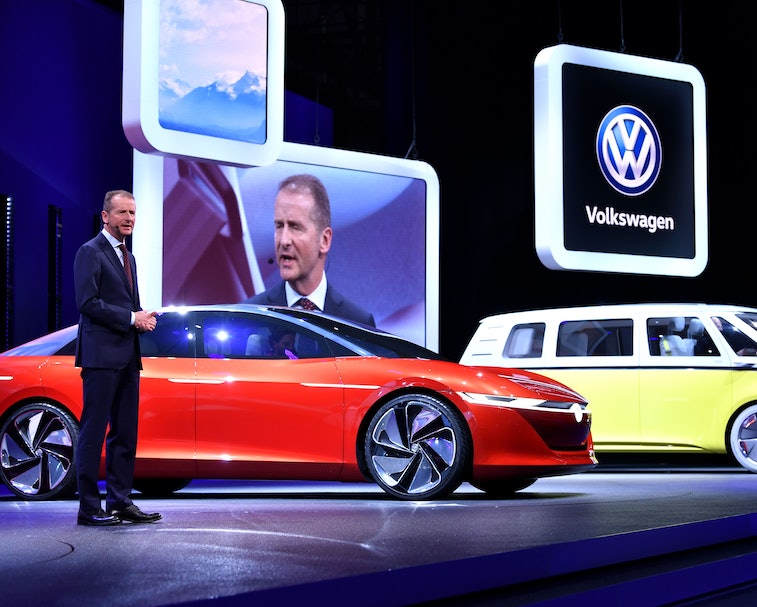 Leaked internal documents show that Volkswagen’s CEO believes U.S. carmaker Tesla has a huge advantage both when it comes to the software it uses in its cars — and frequently tweaks via over-the-air updates — and in terms of its self-driving development. While other manufacturers’ self-driving initiatives are powered by simulations and closed testing, Tesla pulls data from actual consumer vehicles out on the road.

The documents came to light courtesy of German magazine Automobilwoche, and were first reported on in English by Electrek. The VW CEO, Herbert Diess, finds Tesla’s progress so vexing he says it gives him “headaches.”

VW’s got a plan — Diess says he’s putting together a new group within VW to initiate a “catch-up plan.” Whether we’ll see that on VW’s forthcoming all-electric ID3 or in an Audi, Porsche, or one of the VW Group’s other brands remains to be seen.

You can’t blame Diess for being concerned. Not only has Tesla outstripped industry stalwarts like Ford and GM in terms of market value, but its share price has also skyrocketed in recent months, and it’s struggling to keep up with the demand for its vehicles in some markets.

And all of this despite CEO Elon Musk’s frequent missteps around addressing health concerns at Tesla's U.S. facilities, supplying healthcare equipment, and downplaying the current health crisis.

Everyone is playing catch-up — Tesla’s lead is large, but it’s not insurmountable. Every big carmaker is pouring money into EVs and self-driving technology. Tesla may be due credit for prompting the newfound sense of urgency, but its early start doesn’t mean it’s guaranteed to win the race. And recent delays notwithstanding, this decade is going to see legacy players and newcomers alike fighting tooth and nail to give Tesla headaches of its own.

This isn’t the age of the Ford Model T: No one brand is going to manage wholesale domination. But coming out on top is going to mean constantly innovating... and trying to ensure you can at least keep abreast of the pack leader.