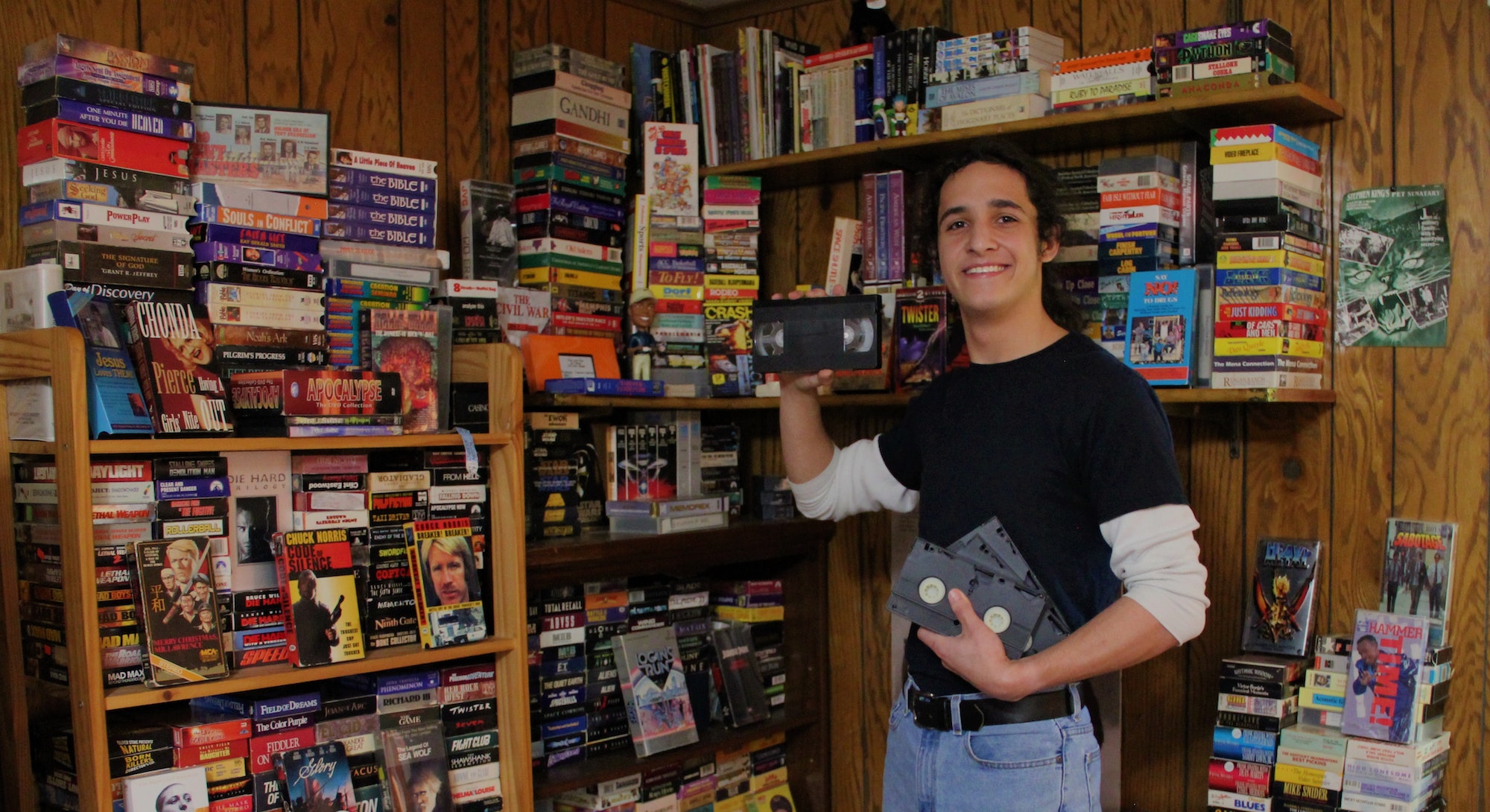 Pete Dillon-Trenchard, 37, had what he called a “fairly prodigious” collection of video tapes when he was a kid growing up in the U.K., but like many, he disposed of them when VHS tapes were outmoded by DVDs.

However, the pandemic got Dillion-Trenchard, a TV subtitler, thinking about the crackle, whirr, and thrum of analog media once more. “In the mid-winter months, I latch onto things,” he says. In the past, it’s been obsessively collecting Star Trek figures, scouring eBay for listings to add to his collection. But in late 2019 and early 2020, Dillon-Trenchard’s obsession was old VHS tapes.

“Sometimes I would watch these videos on YouTube that people had captured of old adverts or trailers,” he says. “I thought, That’d be a cool thing to have a go at.” Then he saw an online listing: Someone living elsewhere in London was trying to offload 50 VHS tapes, the majority of which were recorded from TV.

“I went: ‘Yeah, I’ll buy those,’” he recalls. There was just one problem: He doesn’t drive. Which made for a difficult trip on the London Underground light rail system. “I completely underestimated how much space 50 tapes takes up,” he adds. (He’s since moved from West London to live in Hampshire with his mother, who is equally concerned about space.)

Dillon-Trenchard thought about how he might share his collection with others. Initially, he considered starting a blog where he’d write down his thoughts as he pored through the tapes he was amassing. But when he pushed the first cassette into his VCR, that all changed.

“Instantly I was transported back into the past,” he says. “Obviously, the big programs — the dramas and sitcoms and things — they’re out there on DVD and Blu-ray and streaming services. But then you get stuff like news bulletins, or five- minute CrimeStoppers updates and local adverts. They’re all these things that are a time capsule that no one is ever going to officially release.” So he decided he would.

Thus, What’s on the Tapes — a weekly Twitch stream in which Dillon-Trenchard watches along with footage that’s found on VHS tapes — was born. The channel now has more than 2,000 subscribers and is one of a number of outposts for hobbyist collectors wanting to relive the nostalgia of old-time TV that traditional archives overlook.

“I found a way to make these compilations something people follow almost like a show, or an ongoing story.”

Among the most recent arrivals in the VHS archivist scene is 23-year-old Jackson Bedenbaugh, who runs the Supertape VHS Video Archive YouTube channel and Twitter account, both of which have small followings. Bedenbaugh, a student from Greenville, South Carolina, began collecting tapes back in middle school, in large part because it was cheaper than buying NES games. “It became a much more accessible way to get hold of a lot of interesting and obscure content that was a lot more engaging to me than retro video games ended up being,” he says.

By the time the collection hit 900 tapes, he figured it was time to share them with the world. “It’s a lot easier to get into archiving than one might think,” he says. “And I came to the conclusion that I kind of want to have a place where I can store these, either just for sharing or showing people — or for posterity — and having this stuff preserved somewhere where it wouldn’t eventually mold over to the point it’s not watchable anymore.”

Bedenbaugh’s collection includes evangelical cartoons and church sermons that people have recorded onto VHS from TV, alongside Christian stand-up comedy — a legacy, he says, of his Protestant Christian upbringing in South Carolina, where he was surrounded by religious media. He also has a sizable collection of work training and labor safety tapes.

The tape collectors have different approaches. Dillon-Trenchard provides a wry, Beavis and Butthead-style director’s commentary to whatever’s going on in the tapes in front of him. He typically focuses on advertisements rather than movies and TV shows — a decision taken to avoid any copyright issues, he says. Bedenbaugh doesn’t do much beyond clipping key moments from the tapes he finds, the equivalent of panning for gold within his analog tape mines.

Meanwhile, FORGOTTEN_VCR — a Twitch streamer who asked to remain anonymous because he wants his work to speak for him — does something slightly different. He takes moments from schlocky, low-budget movies and TV shows, plus pro wrestling clips, and combines them into something new.

“I found a way to make these compilations something people follow almost like a show, or an ongoing story,” says FORGOTTEN_VCR, who teaches at a small liberal arts college in the U.S. The relatively narrow range of material he takes content from — wrestling shows and low-budget Hong Kong martial arts films — often use the same, or similar, cast of characters, making it easier to create a new narrative thread.

FORGOTTEN_VCR’s Twitch stream wasn’t initially meant to be public. A longtime collector of VHS tapes — he has “thousands” of them sitting in the breezeway in his house, much to the chagrin of his wife — he simply wanted a way to see what was on them as he digitized them.

So he set up a video capture card on his PC at home that would take whatever feed was coming out of his VCR and put it onto Twitch, from where he could watch while in his office at college. “I would leave for work, put the tape into the VCR, and what was funny is when the tape would end, it would rewind but not always automatically play,” he says.

Sometimes he’d be broadcasting a deep blue screen for hours. “It was always funny to me when I’d go into my stream, and there’d be chatters in there saying: ‘Oh, the tape’s over, someone tell him the tape’s over.’ It’s like, ‘This isn’t for you guys,’” he says. “‘This is for me.’”

“I love finding tapes that are dubbed off TV, because it says something about people and what they wanted to watch, and what the zeitgeist was.”

But eventually it became for others. Since July 15, 2019, he’s been streaming his hour-long VHS mixtapes three times a week on Twitch, where he has 14,000 subscribers. He earns just shy of $500 a month from 120 paying Patreon fans. He uses that money to get new tapes, though he still has plenty in his own archive, the result of buying out stock clearances from local independent video stores.

“VHS is interesting because it’s kind of sociological and archaeological,” he says. “I love finding tapes that are dubbed off TV, because it says something about people and what they wanted to watch, and what the zeitgeist was.”

It’s also partly the reason why so many follow him and other creators, says Fraser Elliott, lecturer in film, exhibition, and curation at the University of Edinburgh. “There’s something compelling and almost voyeuristic about these old finds, but it’s exhausting to search on your own, while here we’re getting that material attached to the personality-led formats of Twitch streaming or curated uploads of small YouTube channels.”

Elliott points out that it’s a precarious form of archiving, given that it’s at the whims of tech giants’ copyright-policy enforcement, but is exciting nonetheless. “It reminds us of those days of utopian possibility during the Web 2.0 era,” he says. “That this is a really democratic approach to archive where material is alive and malleable, taking on all these new meanings through their collision with new forms of media and the potentially vast audiences online.”

“It’s like I have my own TV station now.”

FORGOTTEN_VCR says he loves the community that has emerged around his channel and the way it legitimizes his hobby. When he was in middle school, FORGOTTEN_VCR was asked to write an essay on what he wanted to do when he grew up. His big dream was to edit a magazine. That dream has evolved with age, but it’s still largely the same. “It’s like I have my own TV station now,” he says. “I make all the idents” – branded links between programs – “and I make all the promos, and I can market it however I want.”

For Dillon-Trenchard, the meaning behind what he does is more nebulous. “I don’t know what the goal is,” Dillon-Trenchard admits as the BBC’s Sports Review of the Year 1996 spools on a VCR nearby.

While his Twitch stream is currently on hiatus, Dillon-Trenchard is continuing to digitize his VHS collection, saving thousands of files to numerous hard drives. “I’d love to think this is phase one, and phase two will be a proper sorting and categorizing,” he says. “But really, maybe it’ll be a job for someone when I die.”