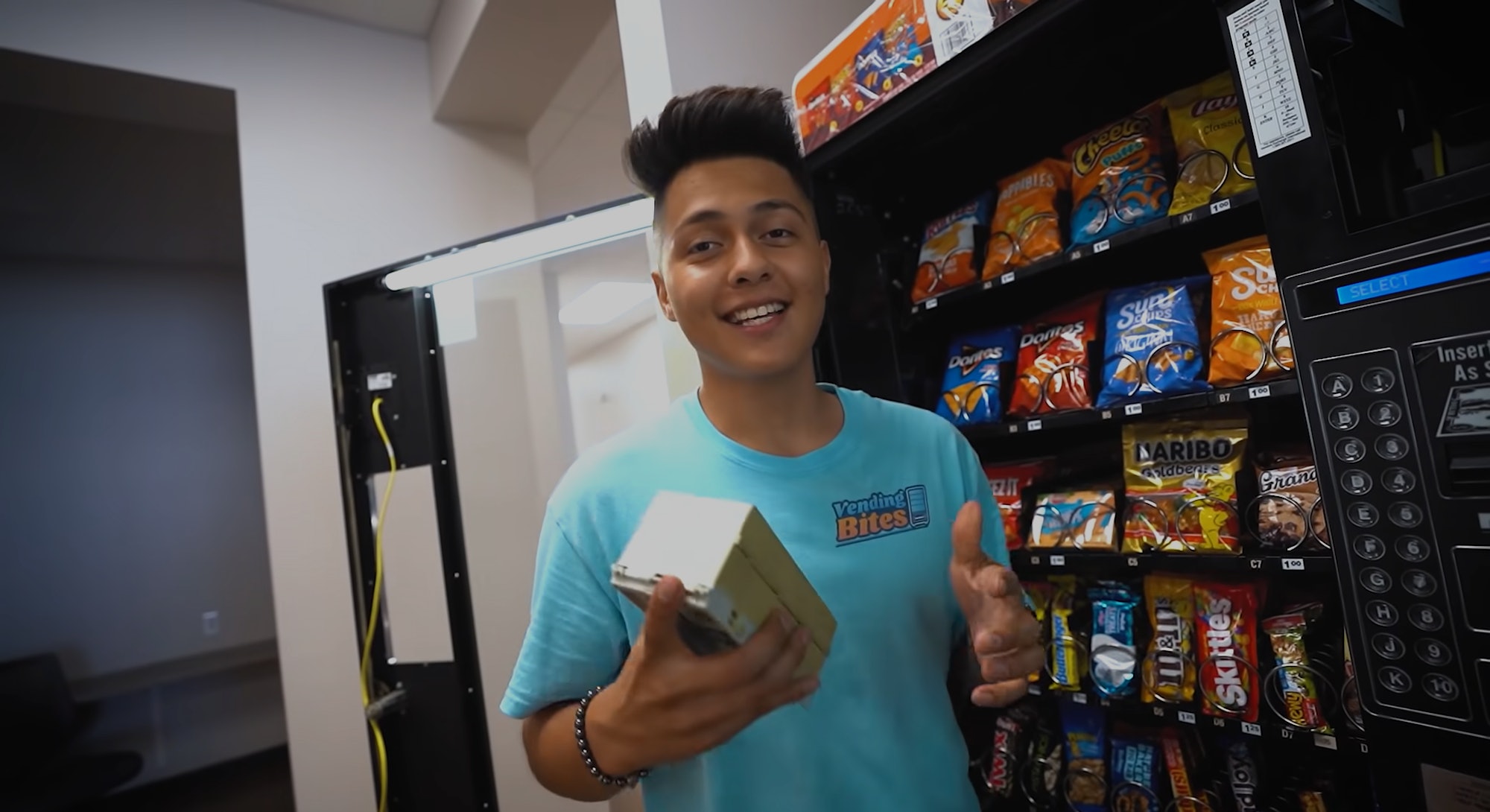 Like many Americans, 21-year-old Jaime Ibanez is always looking for new ways to make money.

In high school, he sold snacks to his friends, which netted him around $5,000 all told. After he graduated in 2018, he got a job selling candy and chips at a concession stand near his home in north Texas.

“I knew I wasn't going to go to college,” says Ibanez. So he took to Google, searching for different ways to get cash. That’s how he came across the perfect fit for him: the vending industry.

Vending machines are ubiquitous here and abroad: The European Vending & Coffee Service Association, an industry body, says that there is one vending machine for every 180 people across the continent, and the European industry is worth $18 billion a year. They’re in workplaces, gas stations, shopping malls, and takeout restaurants — and they all end up in those locations somehow.

Generally, vending machines are owned or franchised by individuals who then agree to terms with business owners to place them on a property. The property owner usually takes a cut from any sales made through the vending machine, with the remainder left for the machine owner.

Ibanez decided he wanted to be that machine owner. So six months after graduation, he took his savings and bought a second-hand combo vending machine — it sells both snacks and drinks in a single unit — for around $4,000. The machine, by U.S. manufacturer Withern, was already on location in a nursing home — a boon, he says, because it meant he made money from day one.

“Back then there weren’t really many videos about the vending industry, or much information about it,” says Ibanez. So in January 2019, the young entrepreneur set up a YouTube channel documenting his vending machine adventures in the hope that it would educate those who came after him.

It grew quickly — almost as quickly as his actual business. Within three or four months he had gained 100,000 subscribers. It’s now at 479,000 subscribers, and his videos have been watched 57.5 million times. He’s one of a number of vending machine YouTubers who have sprung up, bringing audiences along with them as they fill machines with snacks and empty them of spare change.

Today, Ibanez services around 30 vending machines across North Texas that earn him $10,000 to $12,000 a month. But advertising revenue from his YouTube videos can earn him almost as much — between $5,000 and $10,000 a month, depending on how often he posts.

Ibanez’s success on YouTube and IRL isn’t a surprise to those studying the gig economy. “For any influencer, being entrepreneurial, constantly trying new side hustles and therefore new ways of making money, is a fundamental way in which these workers navigate the precarity and uncertainty of the freelance or gig work they undertake,” says Nina Willment, a social media researcher specializing in digital work at the University of York, U.K.

“Influencer audiences like to ‘come along’ on these journeys — living and experiencing the ups and downs of new side hustles alongside the influencer in real time,” says Willment. The joy and inspiration people get from the videos is reflected in the comments section. “I’ve been wanting to get into vending machines for a long time,” reads one comment on this vending machine video. “I even started saving up to get a few machines. This is the type of story I needed.”

That stocking and replenishing vending machines is a relatively blue-collar job is also useful, Willment adds. As any digital creator knows, authenticity and relatability are two key components to viral success — and the daily grind of working to get some cash from something as common as vending machines is likely to play well with audiences.

There’s another key element contributing to the virality of vending machine content. “It also taps into the idea of ‘All the audience needs to do to join the influencer and to make money is to watch this YouTube video to learn how in just two weeks…,’” says Willment. Google searches for vending machines spiked in January 2022, according to the search company’s trends data.

“For a long time entrepreneurship has been almost revered,” says Symeon Brown, author of Get Rich or Lie Trying, a book on influencer culture. Entrepreneurs are “sometimes almost bigger celebrities than A-listers,” he says, pointing to the likes of Elon Musk and Richard Branson. “There’s a huge reverence towards people who embody hustle and who make money. Hustle is a huge desire.”

Yet that reverence towards entrepreneurs and hustlers comes with a catch, warns Brown. It’s also part of a wider societal shift taking place. “There’s the growth of precarity, real wages are down, and people’s sense of security and possibility in labor has diminished,” says Brown. “There’s a huge sense right now that you’re on your own — you against the world. A lot of content is pivoting towards this audience.”

There’s another reason why vending machine videos have such a devoted audience on YouTube: They’re cool.

Besides the economic and social moment that makes vending machine YouTubers popular now, there’s another reason why their videos have such a devoted audience on YouTube: They’re cool. Sixty percent of 18-to-24-year-olds told research company Mintel that they found buying items from vending machines to be fun, compared to 42 percent of the general population.

Ibanez’s viewership splits into two rough groups, he says. “One part of my viewers are in their early twenties or late teens, graduating high school, that want to start a business, who are interested in vending machines,” he says. “But then I also have a younger audience that just enjoys the entertainment side of my videos.”

Ibanez is focused on growing out his business — both parts of it. “I have been asked if I would eventually branch out into other states,” he says. “Most likely not. I just want to grow here in Texas.” He hopes to begin employing route drivers to tend to the vending machines while he focuses on building the business.

And as for his YouTube content? “I’ll still probably be making vending machine videos — but I have thought about branching out into other businesses,” Ibanez says. Classic hustler mentality.