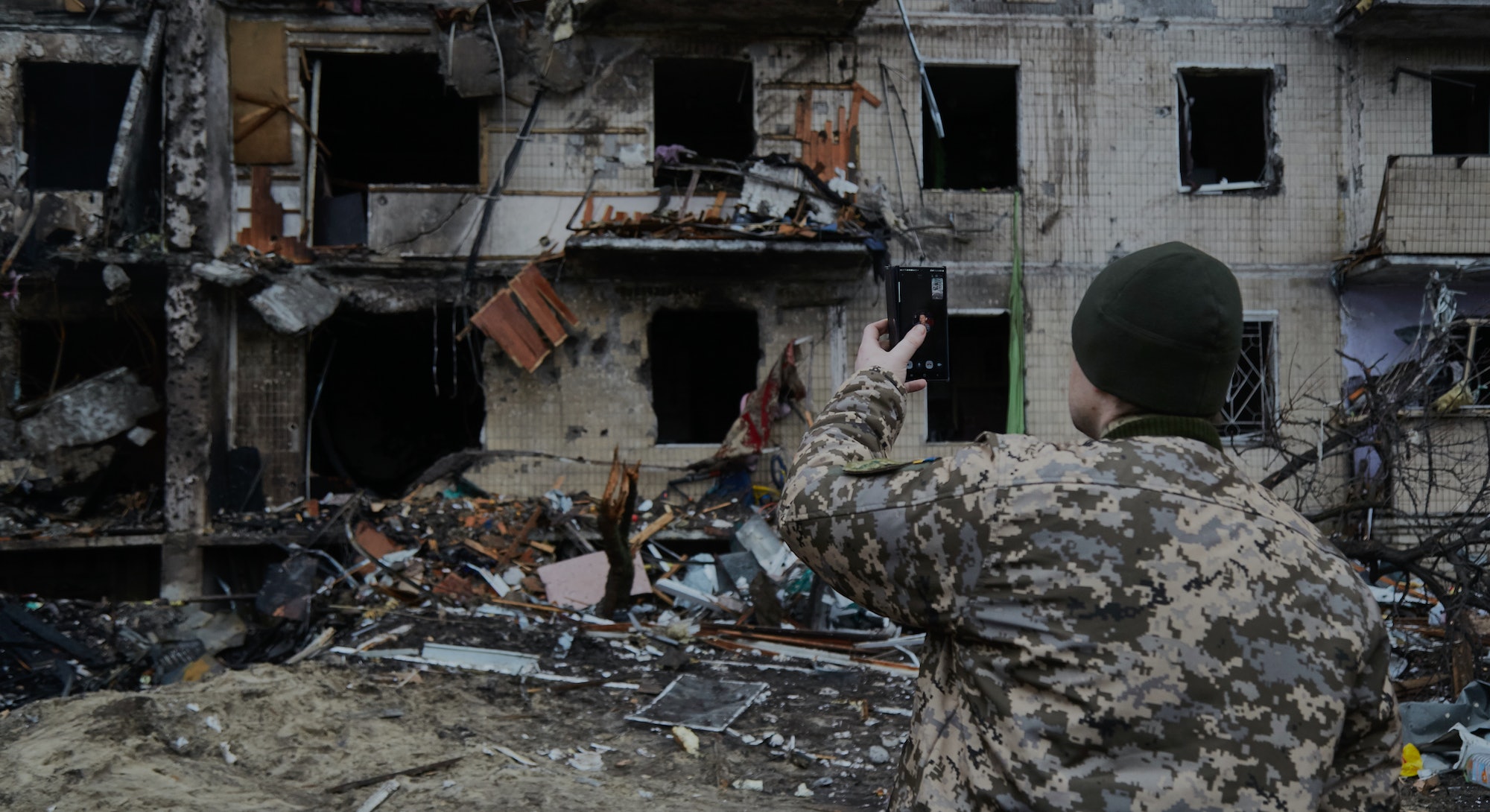 Just hours after the first explosions rocked Ukraine Wednesday night, massive Instagram meme pages began promoting an account purporting to be that of a journalist live-streaming from the ground.

The posts urged fans to follow @livefromukraine to stay in the loop on the breaking news. “PUTIN DECLARES WAR: @livefromukraine is streaming the chaos now!!” one meme page with more than 3.7 million followers posted along with a carousel of videos supposedly showing Russian jets flying overhead and a missile hitting an airport.

A slew of other meme pages followed suit, promoting @livefromukraine — affiliated with a similar page called @POVwarfare — throughout the day yesterday. The bios for both accounts claimed that they were run by journalists in Ukraine. Instagram users flocked to the pages, which were set to private, hoping to gain any morsel of information on what was happening from the ground.

But @livefromukraine and @POVwarfare were not run by Ukrainian journalists — they were operated by a young meme admin in the U.S. who oversees a network of viral content across the web.

The accounts are what have become known as “war pages” on Instagram. They gather shocking battleground footage and videos depicting violence and repost them on Instagram with little to no context, often in an effort to leverage tragedy and conflict to gain followers. (War accounts such as @waraholics, @military_footage, and @war_strikes have all gained followers since the crisis in Ukraine heated up.) Some then monetize these followers by posting advertisements, often for OnlyFans creators.

“What I’m trying to do is get as many followers as possible by using my platform and skills,” the administrator for @livefromukraine and @POVwarfare, who calls himself Hayden, says when reached by phone yesterday.

“I’m putting up what I believe is accurate, and they can draw an opinion based on that.”

Hayden, who claims to be a 21-year-old from Kentucky, says that after learning about the war breaking out through the hip-hop Instagram page @Rap, he saw an opportunity. He had already run a popular war page called @liveinafghanistan. More recently, he had renamed it @newstruths and pivoted to posting viral, vaguely conservative-leaning videos featuring people shoplifting and clips of President Biden.

But on Wednesday night, it was wartime again, and so the page became @livefromukraine.

“I don’t really know what’s going on with all this political tension,” Hayden says. “I’m just trying to document what’s going on." His verification methods involve sussing out the comment sections of the videos and seeing if other people have claimed they are false. “I can’t really verify them myself,” he says of the videos he shares.

Existing followers commented that one video he posted was old and not even of Ukraine, yet it was not taken down. Hayden doesn’t worry much about spreading misinformation. “No one even knows what’s going on,” he says. “They believe anything that’s put in front of them. I’m putting up what I believe is accurate, and they can draw an opinion based on that.”

The sensationalized content found on war pages performs well in the feed and garners views at an alarming rate. “These posts do so well because Ukraine is a super hot topic right now, and there’s shock value in videos of an airstrike," says Rowan Winch, the 17-year-old chief social officer of Fallen Media, a meme-focused content studio.

Hayden compares the engagement he was getting on his accounts to that of the World Record Egg, an Instagram account whose sole photo — of a brown egg — has garnered a staggering 55.8 million views since January 2019.

Since @livefromukraine and other war pages were set to private, would-be followers had to request to join. This is a well-known tactic for spurring the growth of meme pages. “What pages like that usually do is wait a couple days for all the followers to request, then they’ll accept them after the topic has died down and more likely than not everyone has forgotten why they followed,” Winch says. Once the account has accrued enough followers it can pivot to something unrelated, even a brand page.

War accounts like @livefromukraine are not to be trusted, says Joan Donovan, research director at the Harvard Kennedy Shorenstein Center for Media, Politics and Public Policy, who points out that the fact that the account claims to be that of a journalist is undeniably misleading. “People will search a hashtag and expect some spammy content, some true content,” she says, “but one thing they don’t expect is misinformation, disinformation, or propaganda.” These are all things, she says, that may be inadvertently shared by war accounts.

Although @livefromukraine featured advertisements on the page, Hayden claims he isn't in it for the money. He wants to help people, he says. He just needs enough followers to do so.

“What I’m trying to do is get as many people on this platform as possible,” he says. “If an opportunity comes to benefit Ukraine, I can’t do that until I have the amount of eyeballs I want on there.” (He says he hopes to get a follower count “in the millions.”) However, other accounts seemingly affiliated with @livefromukraine promote links to e-commerce sites selling military-themed products like a miniature handgun on a keychain.

Meanwhile, @PlantATreeCo, another large Instagram page with more than one million followers, also started sharing footage of the war yesterday and running a fundraiser for an alleged relief effort. The account had previously claimed that it would plant a tree for every follower it got and 100 trees for every Instagram Story repost it received, but those trees never materialized. (@PlantATreeCo's Ukraine fundraiser was removed yesterday afternoon for violating guidelines).

“War is just another thing these meme accounts can monetize.”

By the end of day yesterday, Instagram had taken down @livefromukraine, @povwarfare, and other war accounts for violating community guidelines. “We removed a series of Instagram accounts that made false claims about their location and purpose to grow their following,” an Instagram spokesperson tells Input. “This activity violates our policies against inauthentic behavior, and we’ll continue to monitor and take action when we find it.”

The meme accounts promoting the war pages are still up, however, garnering thousands of views and comments by the minute. Another page called @livefromukrainebackup — which claims to belong to an “anonymous journalist reporting live from Ukraine” — also sprouted up.

Jackson Weimer, an Instagram meme creator who first called attention to the pages on Twitter, says that “this is just the beginning of war accounts on Instagram.” He adds, “War is just another thing these meme accounts can monetize.”