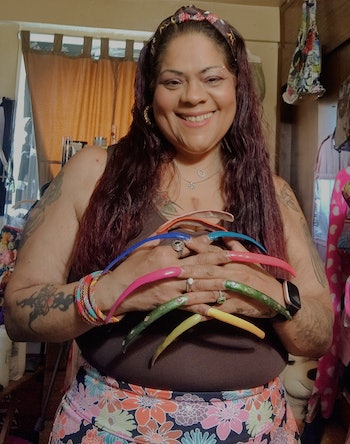 Cordelia “Dee Dee” Adams began training as a nail technician in 1989, opening her own salon in Indiana four years later.

Adams juggled running the salon with her administrative job at the U.S. Postal Service. She survived on very little sleep, fueled by her devotion to nail art.

Adams’ own nails, which spoon upward due to an iron deficiency, are something to behold. Each one is covered in delicate designs, which she’s carefully crafted over the years. But what’s most impressive about them is their length: The majority of them measure 12 inches long. Laid end to end, her fingernails would be taller than Shaquille O’Neal.

In the more than three decades that she’s been growing her nails out, Adams has never once removed the decorations; instead, she backfills her acrylic overlays and adds new designs as the nails grow. Over the years, she’s learned how to safely write, drive a car, and do her work at the post office. Although she sometimes elicits stares and gasps from strangers, for the most part she hasn’t let it bother her. She just ignores them and goes about her life.

But when Adams decided to start a TikTok account in May 2020, she sensed that the questions would be unavoidable. “I knew eventually my hands were going to have to show while I was making a little video. So, I decided to introduce myself as ‘the nail lady,’” says Adams, now 60, who retired from the Postal Service in 2018 and still does nails at her salon. “I knew TikTok was a platform for young people. I wanted to show them it was okay to be different and not just follow the crowd.”

Adams has accrued more than 800,000 followers on her TikTok account, @goldeelocs10, by showing the world how she navigates life without breaking her lengthy nails. She’s one TikTok’s numerous talonistas: women with nails five inches or longer — many of whom are people of color — who have amassed enormous followings by showing viewers how they manage day-to-day life. They hope their videos will help to normalize having long nails and challenge people’s preconceptions about their lifestyle.

For Season Nixon, a 43-year-old nail influencer from Pennsylvania who has nearly 31,000 followers on her TikTok account, @queentippietaps, pulling in viewers has been shockingly easy. “Once a month I’ll go viral, literally just for basic stuff,” says Nixon, who, when she’s not making videos, cares full-time for her 20-year-old daughter, who has autism.

Nixon has attracted millions of views by chopping up brussel sprouts, putting on her shoes, and even just wiggling her six-and-a-half-inch long nails and two-inch long toenails in front of the camera. “My viewers just want to know how I handle things, and how I use my phone,” says Nixon. “They just want to watch me do stuff.” (However, she hasn’t yet shown viewers the tongs she keeps in her purse to help her grab items she needs.)

Adams found success with similar videos — demonstrating how she washes her hands, removes her rings, and opens her car door — although she likes to mix things up when she can. “I try to post things that are funny and motivational,” she says, “to let people know that I’m just a regular person.

“Eighty percent of the time I get questions about my personal hygiene,” she continues. Adams is referring to the inquiry that bedevils many nail influencers: “How do you wipe your ass?” Some TikTokers have demonstrated their techniques, often raking in millions of views in the process.

But Adams refuses to go there. “I’m not showing it,” she says. “I tell them there’s a door on a bathroom stall for a reason. What I’m doing behind that door is not for everybody to see.”

Despite the occasional rude question, the talonistas carry on due to the potential for profit. “People say they appreciate my long nails, and they send me money,” Nixon says. She makes custom videos — often ASMR clips in which Nixon taps her nails — for $25 each; she also takes donations from male followers who have a fetish for nails.

“I’m considering an OnlyFans,” she says. “With the amount of people that contact me, there’s probably many more who are afraid to talk. So, I figure they could just buy my OnlyFans videos instead.”

According to New Yorker Ana Otaño, a 56-year-old retired customer service worker with five-inch-long nails, the world of nail fetish is a lucrative business. “I know people that have gotten so much money. They’ve opened businesses, traveled, bought houses,” says Otaño, who has nearly 13,000 followers on her four-year-old TikTok account, @bknails923.

Otaño says she’s “never gotten a dime from any of it,” but there are tangible perks. She says she has important friends in the nail fetish world — Hollywood actors, a tech giant, a city mayor — who send her gifts and visit her in New York, taking her out to extravagant lunches or on shopping sprees.

“Some of them are pretty famous, but I can’t tell you their names,” says Otaño, who adds that sex is not on the table for her fans. “These are people that are in the nail world, but you wouldn’t know it. They don’t want the world to know they have a fetish.”

While TikTok nail influencers are used to their fair share of adoration, it comes at a cost. They also are forced to deal with hordes of haters, who fill the comment sections of their videos with vitriol.

“When I first got on TikTok, it actually had me in tears,” Adams says. “They were extremely mean. They said that I’m nasty and gross, that I can’t clean myself properly. They even said my nails weren’t real, and that I was lying.” She adds, “I used to get up every morning and start blocking, because I’m just not going to tolerate disrespect. I mean, people were getting offended about something that’s on me. I’m not forcing them to do anything! They could just keep scrolling.”

Otaño, meanwhile, has taken a more combative approach. “Unfortunately, because of the way I am, I will come for them and curse them out and let them know about themselves. People make fun of me, and I’ll tell them straight: ‘You have two followers; I have 12,000. That should tell you something!’” she says.

Between posting ASMR videos in which she clicks her nails together repeatedly, Otaño often posts clapbacks to cruel commenters, assuring them that they’ll never break her spirit. “Where do they get off coming to our pages, calling us nasty and gross?” she says. “What is missing in their lives that they feel better by putting someone else down? Just because you have no life, it doesn’t give you the right to come after mine.”

Although Nixon also gets hate sometimes, she chooses to ignore it. For her, the positives outweigh the negatives. She says that she recently left her boyfriend of 26 years after she found out he was cheating. Having loving fans “helped me to be able to leave him, because I was able to start making my own money,” she says. “It boosted my self-esteem and my confidence after being in a relationship for that long.”

Adams, meanwhile, is spurred on by the impact her videos have had on viewers. “People have said they appreciate how I handle myself in the midst of the negativity,” she says. Her hope is that she’ll inspire her fans to follow their hearts, no matter what other people say.

“Maybe someone is afraid to live their life how they want to, or they haven’t yet achieved that level of kindness to themselves where they can do the things they want,” she says. “That’s why I started on TikTok. To let people know it’s alright.”