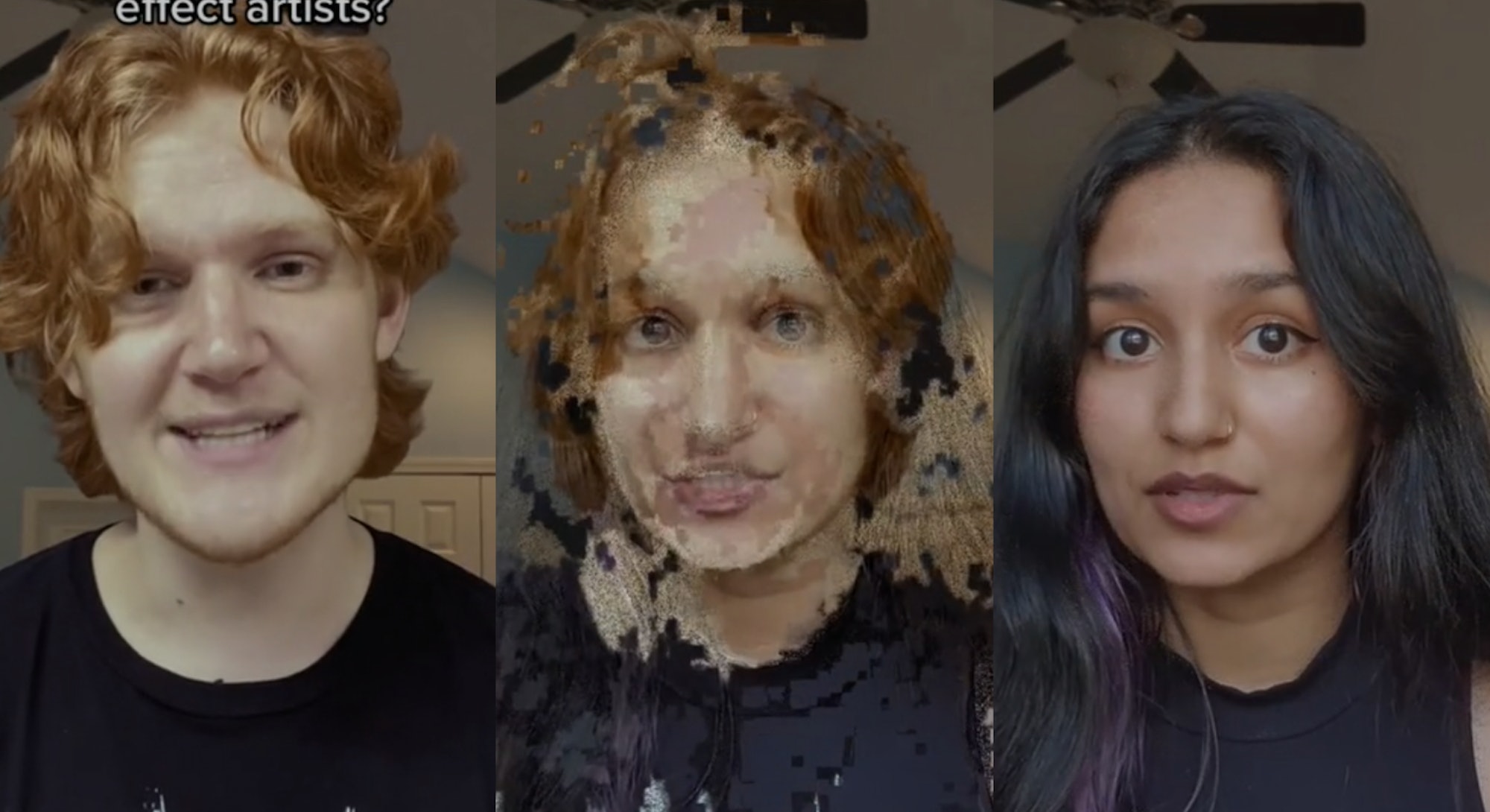 Curt Skelton has been obsessed with visual effects since he was a kid, when he spent hours futzing around on Adobe After Effects CS3.

“I can’t imagine a life without visual effects,” says the 22-year-old Los Angeles college student and liquor store employee. “It’s been my greatest passion ever since I was in middle school.”

Skelton, who aspires to make VFX his career, has worked in a variety of capacities on a few yet-to-be-released films, according to his IMDb page. But he’s become famous for this TikTok creation:

In the video, posted on Thursday and seen 13.5 million times, Skelton convincingly (to some) reveals that he is AI-generated. Skelton claims that he is a composite of different effects — a DALL-E image (prompt: “Conan O’Brien and Matt Smith had a son 22 years old”) wrapped around a skeleton frame and animated using gesture-tracking software.

The video shows that the voice of the woman supposedly behind Curt Skelton — a 21-year-old New Jersey–based TikTok visual effects artist named Zahra Hussain — was altered to create Skelton’s speech.

Hussain tells Input that Skelton conscripted her with a direct message on TikTok: “I HAVE THE GREATEST IDEA FOR A TIKTOK COLLAB!” The two were mutual follows, but not close before the project.

“He had a full idea down ready to go,” says Hussain. “He brought me onboard with his enthusiasm.” When Hussain said yes, Skelton sent her a video showing what needed to be done, including how to stand and what to say in order to smooth the transition between the two of them.

The video suggested that AI would be able to replace the role of visual effects artists — and that nearly a year’s worth of Skelton TikToks were fabrications. It triggered huge concern among some and vocal skepticism among others.

But Skelton insists he wasn’t trying to fool folks. “I don’t blame the people who thought it was real,” he says. “I’m just disappointed. My Instagram was linked to my TikTok account the entire time. The goal was never to trick people. They did that to themselves.”

Skelton says he came up with the idea for the viral video earlier this month, while reading online conversations about the fear of AI replacing the careers of visual effects artists worldwide. “I’ve always loved the idea of AI being used in art, but what got my attention lately was all the artists worried that they’ll be put out of a job directly because of it,” he says.

The video was meant to be a lighthearted way of poking fun at this concern. “Nobody got the original joke of the video,” he says, “which probably means it wasn’t a good joke. But when I say, ‘Will AI replace the role of VFX artists? It already has,’ you’d expect me to talk about how it’s replacing jobs, not the literal VFX artist.”

Skelton says he wrote the initial script for the video within an hour. After Hussain did her part, he edited and uploaded the video to TikTok. Then he went to do a shift at the liquor store.

“By the time I clocked out, it was by far my biggest TikTok, with the most interactions,” he says. “I realized how big it got when friends were sending me screenshots of it on their Twitter feed and Elon Musk had liked the video.” Skelton gained more than 100,000 followers over the weekend, bringing his total to nearly 275,000.

The public reaction took Skelton aback, particularly when people began scouring his internet presence to try and discern whether he was an AI-generated bot. “People flooded my Instagram with comments asking if I was real — and also my girlfriend’s Instagram, letting her know that I was in fact a robot,” he says. Amateur sleuths dug out old Instagram posts, including photos of his driver’s license, as proof that the video was a scam.

The controversy highlights the fear around deepfaked media and the ability for people to be hoodwinked by AI. Agnes Venema, a researcher at the University of Malta who studies deepfakes and disinformation, says Skelton should have been more cautious in how he presented his video. “Not many people have time for, or indeed are aware of, investigating linked accounts and doing some research,” Venema says.

“I am not subscribing to the notion that Skelton is a liability per se,” she adds, “but the nonchalance with which he wrote the script and posted this video does concern me in terms of whether or not he really considers the consequences of his actions.”

Meanwhile, Casey Fiesler, assistant professor at the University of Colorado Boulder, posted a video to TikTok debunking Skelton’s production, comparing it to the “I taught an AI to write X” tweets that became popular in 2018. “If you want to take a positive spin on the fact that so many people were fooled,” Fiesler says, “it does also suggest that people understand the potential for very convincing deepfakes.”

Skelton hopes that whenever AI is actually good enough to completely fictionalize an individual, his TikTok will be viewed in the same way we look at old episodes of The Twilight Zone that predicted the future.

The most worrying part for him was the threat to his professional prospects. “Some people on Reddit were upset at me and said that I’ll never get a job in VFX because studios blacklist people that make fake viral videos,” he says. “They called me a ‘liability’ and a ‘risk.’ That part got me really upset.”

At one point, Skelton was mulling deleting his entire account. But then he received a text — one he calls “the single greatest possible text ever.” Skelton declines to say who the text was from or what it said. “It’s confidential,” he says, “but just know that you should never listen to people on Reddit, because uploading that video turned out to be the greatest thing for my career.”