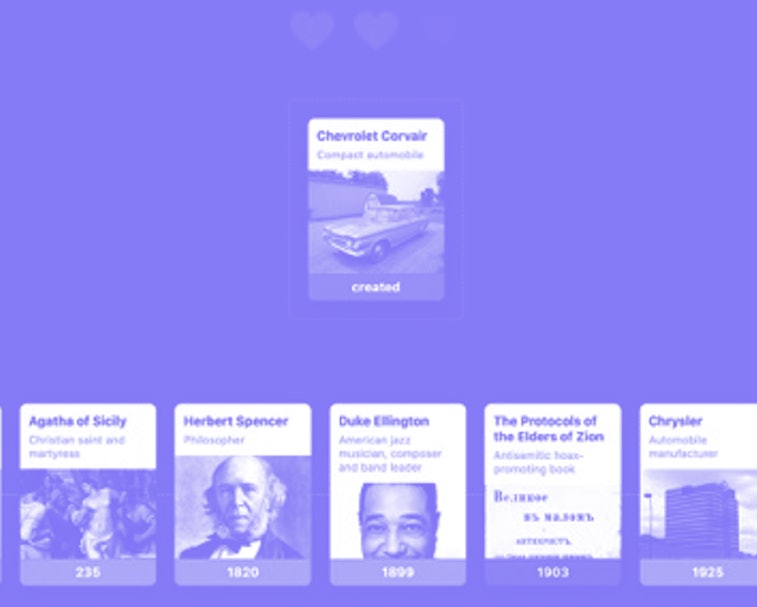 What came first, John Travolta’s birth or The Norman Conquest of Southwest Italy? Where would the end date of America’s Next Top Model fit into the timeline? The origin of Goodyear Tire Company? The Shakespeare play Troilus and Cassida? If you like trivia and timelines, I urge you to check out WikiTrivia, a free quiz game that has been called an “online clone of the card game Timeline” and a “totally a sneaky trick to get people to fix stuff up on Wikidata.”

Since I put this in a group chat, my friends and I have been ruthlessly competing for the highest score. I’m stuck at 14. The game starts easy (obviously the Biblical prophet Jeremiah came before the Felix the Cat cartoon) but rapidly escalates in difficulty. More events on the timeline means you have less wiggle room in your date estimations. You have three lives before you start over.

A delightful — but sometimes frustrating — aspect of the game is how much the items vary in obscurity. Sometimes you’re dealing with a first-century rabbi you’ve never heard of (sorry to Gamaliel enthusiasts) and other times you’re asked when Blink-182 formed (I could immediately narrow it down to the ‘90s).

The project inspires Wikipedia rabbit holes galore. Each card flips to reveal a link to its topic’s Wikipedia page, where you can surf the endless sea of information for the purpose or for pleasure. After losing a game for not knowing the date the territory of Bermuda was created (1612), I spent an embarrassingly long time learning about the history of various Atlantic archipelagos.

Can we fix it? Yes we can! The code is open source and users can report bad cards and other issues. Some mistakes (such as the start of the company “Puma” being listed as “0”) arise from Wikidata, where the game gets its information. A project under the Wikimedia Foundation umbrella, Wikidata is a vast but imperfect set of information about basically everything, and the good news is that you are empowered to fix the mistakes you may find.

One player even took to GitHub to suggest a Wordle-esque emoji method for spoiler-free sharing, which would look something like this:

Wikitrivia was created over the past year by software engineer Tom Watson, a self-professed fan of badminton, motorsports, and Madrid terraces. According to LinkedIn, he works for data company Deep Channel. As of publishing, he has not responded to our request for comment.

There are a slew of other Wikipedia-related activities or projects that accomplish the same goal, such as WikiRacing, where you navigate from a page to a disparate definition by clicking Wikipedia’s blue hyperlinks — like traveling from “Cucumber” to “Gettysburg Address,” or from “Hairy ball theorem” to “Beverly Cleary.”

There’s also the eerily beautiful “Listen to Wikipedia,” a web page that plays a tone as edits come in from all over the world. Check out Monumental, a map of Wikipedia articles (search your city to explore the notable establishments that have been under your nose). The People’s Map of the USA shows cities by most-Wikipedia-searched resident.