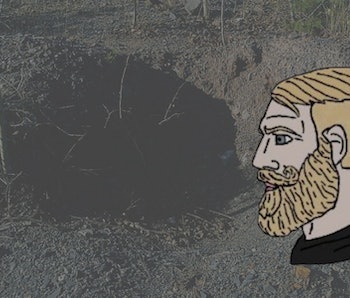 In a Reddit post last week, user r/Specialist-Ad4561 confessed that she is a 27-year-old woman whose boyfriend is obsessed with tunnel digging. “He's spent roughly a year on it, and it's evident,” she writes. “He's got cement beams, electric lights, even chairs and a small table.” She was concerned because he spends “almost all of his free time” there and “doesn’t really have a social life” but notes that he’s “always really happy when he gets back from digging.” She didn’t want to disrupt his hobby but she also didn’t want to enable an unsafe or unhealthy habit.

Screenshots of the original post were shared onto Instagram and Twitter, and it descended into the algorithm’s spin cycle, inspiring a larger conversation about dudes who dig digging. The post unearthed story after story of guys finding solace underground. The Wikipedia article “Hobby tunneling” got over 250 times more views on Wednesday of this week than last, and writer Elizabeth Bruenig chimed in to say that every man has a metaphorical yard tunnel — an all-consuming but nonsensical hobby. Whether or not the Reddit post was even true, the topic clearly struck a chord.

Over chat, the Reddit poster told me that “this whole thing just sort of blew up much larger than I had wanted it to” and shared that she and her boyfriend had already talked through their tunneling-related issues (he’d agreed to cut back a bit). But the internet is still ablaze with discussion about dudes’ instinct to descend beneath the ground into a man cave of their own creation, partaking in real-life Minecraft with shovel in hand.

Hobby tunneling hall of fame — In 2015, a 10-meter tunnel under a Toronto park, complete with a generator and water-resistant lights, made major headlines and sparked panic before a quiet 22-year-old construction worker named Elton McDonald came forward as its creator. He apologized for causing trouble but struggled to provide a rational motivation for his mole-like hobby. "Honestly, I loved it so much. I don't know why I loved it," he said of tunneling. McDonald isn’t the only dude drawn to tunnel digging.

American entomologist Harrison Gray Dyar Jr. dug tunnels from 1906 to 1916 under his home in Washington D.C. He kept his hobby private but in 1924, a truck sank through the pavement and drew attention to his subterranean network. The turn-of-the-century scientist told the Washington Star that it all started when he dug a flowerbed. “When I was down perhaps 6 or 7 feet, surrounded only by the damp brown walls of old Mother Earth, I was seized by an undeniable fancy to keep on going.” Dyar, whose studies on insect development were foundational to the field, said "some men play golf, I dig tunnels".

“When I was down perhaps 6 or 7 feet, surrounded only by the damp brown walls of old Mother Earth, I was seized by an undeniable fancy to keep on going.”

Even the legendary “father of the supercomputer,” Seymour Cray, built roomy cedar-floored subterranean passageways as his mind worked through technical problems. While I'm digging in the tunnel, the elves will often come to me with solutions," he once said. Tunnel digging afflicts royalty. The notoriously eccentric 5th Duke of Portland oversaw the construction of a complex of underground rooms and tunnels that were painted pink. Digging dudes have created man caves all over the world, from Armenia to Costa Rica to London. And more recently, British Youtuber Colin Furze has broadcast his underground bunker and tunnel system to almost 12 million YouTube subscribers.

Why? — While some tunnel-builders dig for escape, illicit trade, or doomsday prep, others just do it for fun. When British hobby tunneller William “Mole Man” Lyttle was asked by journalists why he had excavated the tunnels, he said "I'm just a man who loves to dig" and that “there is great beauty in inventing things that serve no purpose."

Ahmad Abu-Ake, a psychology researcher at the University of Lausanne who studies hyperfocus, told me over the phone that “tunnel digging is an extreme example of a controlled environment. It’s the epitome of minimizing intervention from the outside world.” Our brains constantly engage in predictive coding, where we make models for the world that are as accurate as possible. And a private, subterranean space is a highly predictable environment that can give someone a sense of control. Austrian psychiatrist Anton Tölk believes that tunnel digging stems from a longing for the safe womb.

Is it just dudes? — Abu-Ake thinks that gender differences in tunneling — the so-called “masculine urge to dig”— might have a psychological explanation. “Men tend to have a proclivity for systems and rule-based life whereas women have more tendency to empathize and be social,” he told me, referencing the empathizing–systemizing theory put forward by psychologist Simon Baren-Cohen. But while most prominent tunnel builders are male, anyone can find solace in digging. In 2015, Slate profiled a female graphic designer named Leanne Wijnsma who had created thirteen tunnels and had no plans to stop. When tunneling, Wijnsma said she has “only one goal, and that is extremely relaxing.”

Our ape relatives participate in tool-mediated digging, too. Larry Taylor, Former Deputy Director of Ape Action Africa says in a video that “all baby chimps, if you start digging with a stick… they’re fascinated by it.” As he spades the cool earth, the apes gather to watch with a hypnotic gaze, their faces just inches away from the hole. “Sometimes, they’ll try to take the stick from your hand and do it themselves,” he says as stubby chimp fingers claw his stick in an attempt to join the dig.

A word of caution — Before you take to the fresh earth with a spade to act out on your mole instincts, beware of the dangers of hobby tunneling. Amateur tunnel builders have been buried alive, and Harvard Medical School assistant professor Bradley Maron told The Washington Post in 2014 that he’d seen at least 77 cases of hole-digging emergencies.

But it’s not all bad. Exercise reduces anxiety in both the short-term and long-term and can obviously be done in conjunction with psychotherapy, so it’s not quite fair to imply that every hobby tunneler has gone off the deep end. The trite “men will literally dig a completely pointless tunnel instead of going to therapy” remark is just a false dichotomy that ignores the therapeutic effects of meditative physical labor.

Tunneling through time — Digging is a human activity that dates back to at least 6000-4000 B.C. and manifests on playgrounds and in sandboxes across the world, and The American Journal of Psychology published a paper in 1910 that said “the greatest delight, especially for the boys, is digging caves.” The century-old text continues: “There seems to be a peculiar interest in digging a hole big enough to contain three or four boys, and then covering it up and concealing it so that no one can find it but the ones who dug it. Here much time is spent in hiding from people, eating fruit and other food pilfered from the pantry, etc.” Perhaps tunneling is timeless.