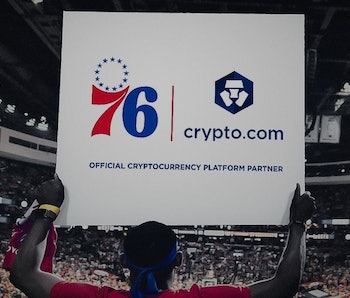 Fans of the Philadelphia 76ers are probably not doing so well at the moment. If a disappointing second round exit in the Eastern Conference Finals was not enough, Ben Simmons, one of the franchise’s young cornerstone players is now refusing to play another game for the team. So maybe some news away from the court could serve as necessary respite for the city of brotherly love. Yesterday, it was announced that the franchise would be partnering with Crypto.com to bear the platform’s iconography in the form of a jersey patch. All four versions of the 76ers’ jerseys will feature the patch on the left shoulder, a form of advertising that the NBA has adopted since 2017.

Additionally, the 76ers will be launching an NFT collection with the crypto company that will be made available to purchase around the start of the upcoming 2021-2022 season through Crypto.com. It remains to be seen whether NBA fans can be persuaded to move outside the NBA Top Shot realm when it comes to NFTs related to the league.

“The NBA is one of the most popular leagues in the world, and the 76ers were an obvious choice... Together we’re going to create integrated experiences for fans everywhere; our patch and court integrations are just the beginning,” said Kris Marszalek, co-founder and CEO of the emerging crypto firm in the partnership announcement.

While there usually isn’t too much to parse from these sorts of quotes, this one stands out as a sign of the way the NBA will go about extracting value from its product.

360-degree branding — One aspect of the partnership that sticks out is the complete immersion. Aside from the NFT collection and the physical patches that will be worn by players like Joel Embiid and Tobias Harris, Crypto.com will expand its influence to other aspects on and off the hardwood. The company’s website will be visible on the baseline apron, courtside LED screens, and the 76ers fan hub.

One aspect of the partnership that sticks out is the introduction of an NFT collection. It’s one thing to get in on the rapidly expanding advertising space for the sport but to provide an actual product feels like another thing entirely. To call it a blatant cash grab is perhaps a bit over-critical but the move does feel unmistakably like another attempt to stake a claim in the emerging marketplace for digital sports collectibles.