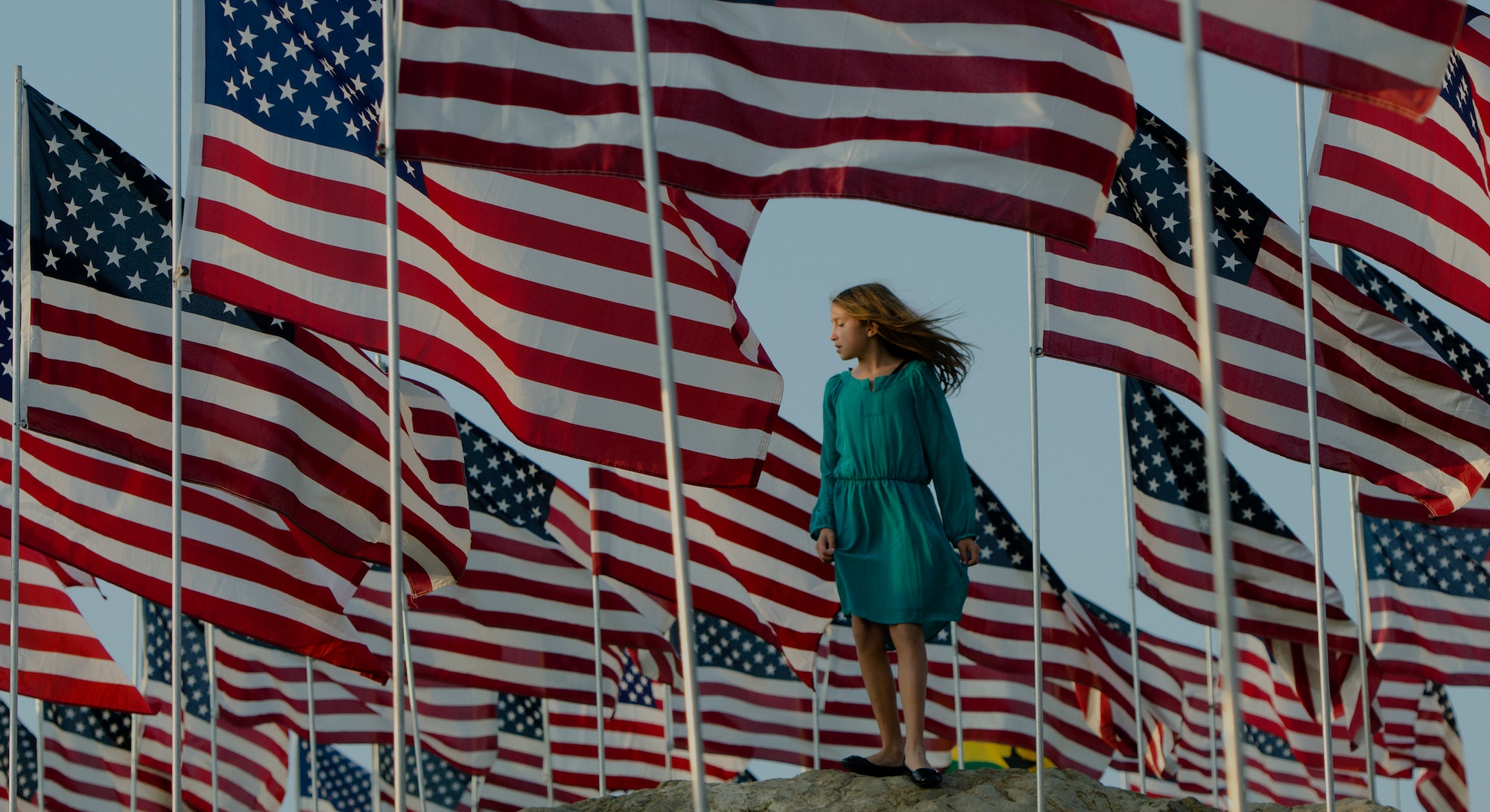 Like most millennials, I have talked about where I was on 9/11 countless times.

It’s not a very interesting story, to be honest. I was in eighth grade homeroom in Tampa, Florida. My teacher wheeled the AV cart to the front of the room and turned on the news. I remember the looped footage of a plane hitting the South Tower. The plumes of smoke. That first day, I struggled to put the event in context. My only experience with New York had been a class trip in 2000, where we ate pizza at Sbarro, of all places.

From then on, I was glued to 24-hour news channels. Flags waved all over the neighborhood, bumper stickers implored us to “Never Forget,” and Lee Greenwood’s 1980s hit “God Bless the U.S.A.” surged up the Billboard charts. My parents were Republicans who credited George W. Bush with bringing the country together after the attacks, though we didn’t talk about it much at home. In October, I watched on CNN the first U.S.-led airstrikes: grainy, night-vision footage of bombs exploding over Afghanistan’s most populous cities.

But for 20 years, I’ve kept another part of my 9/11 experience mostly to myself: the year I spent afterward on Teen magazine’s Terrible Tuesday message board, a bright pink and purple space for girls to discuss the Sept. 11, 2001 attacks. I was a Teen magazine fan who occasionally stopped by the website for an extra dose of reader-submitted “embarrassing moments,” but I hadn’t visited the message boards until then. At one point you could find a link to Terrible Tuesday in the caption below a photo of the heartthrob Josh Hartnett, looking solemn: “The World Mourns. Read About It… (Share your thoughts by clicking here.)”

“As we know, the United States was senselessly attacked on Tuesday September 11th,” the board description read. “Hundreds, if not thousands, of innocent people lost their lives. How do you feel about this? How do you think life as we've known it will change? How do you think our government should react? Share your thoughts.” This, to me, was far more interesting than whatever was being discussed on the other boards, like “Must Hear Music” and “Boys, Boys, Boys!”

It’s hard to imagine now, but Terrible Tuesday was a forum without moderators. However, profanity was automatically censored, often to a ridiculous degree. For instance, you couldn’t say “blow” or “job” either together or separately. So we adapted, replacing the Os in those words with zeroes.

Terrible Tuesday was a powder keg, ready to bl0w at any moment. Take the December 2001 thread “Its either them or us.” Someone with the screen name SuGarPantieS started it: “Some of you are saying its wrong to bomb the afghanies [sic] cuz they did nothing wrong right? Sure they didnt do anything. But neither did we and we got bombed. Would you rather sit there and let your family and friends die?”

There were dueling threads: “Why i hate america” versus “I LOVE AMERICA!!!!!”

But user HunnieBunnie pushed back. “More people will die because the US decided they wanted to ‘avenge’ the victims deaths,” she wrote. “More innocent afghans AND americans.” Down the line, there were dueling threads: “Why i hate america” versus “I LOVE AMERICA!!!!!”

My parents had no idea I was sitting in their back room communicating with strangers about George W. Bush and flag burning for a year. But there I was, talking to fellow teenage girls — at least I hope they were teenage girls — on the Terrible Tuesday board, beginning to establish what would become my political identity.

Few of my Terrible Tuesday posts, made under the screen names jnnyfr or jnnyfr48, survive in the Internet Archive. One is a rant from January 2002 — impassioned though factually incorrect — about a 15-year-old boy who crashed a Cessna into the Bank of America building in my hometown of Tampa. The media, I lamented, was sensationalizing the incident’s echoes of 9/11. I was frustrated by the lack of nuance, and the ideas about who was an enemy of America and why. I was angry when Tampa’s police chief Bennie Holder told CNN, “I believe his father was part Arab.”

While I wasn’t exactly calling the U.S. AmeriKKKa, I thought HunnieBunnie was badass. I admired her willingness to stand up to xenophobia and question the rising tide of nationalism. And she had a whole group of people cheering her on.

I recently found a blue pocket folder in my room at my parents’ house, titled “Writing,” filled with earnest screeds from November 2001. Then it came back to me: In my offline hours, I sat at the child-size desk in my bedroom, writing essays in pencil with titles like “Is this the meaning of justice?” and “The land of the free and the home of the brave?” I was trying out ideas and working through them with others via Terrible Tuesday, getting ready to make them part of my real life.

The Terrible Tuesday board ended in a siege, a brigade of bots. They stretched the board’s simple html tables with long strings of characters and somehow bypassed the obscenity filters. All the users worked together to bump genuine posts to the top, but it wasn’t enough.

Audrey Fine, who was then editor in chief of TeenMag.com, tells me her team brought in the top minds at the magazine’s publisher to solve the issue. “Legal was like, ‘Listen, this is just not worth whatever lawsuit is waiting out there from whichever litigious parents in Kansas are going to be after us for having mortified their children,” she recalls. In the late summer of 2002, the higher-ups shut the message boards down.

In the years that followed, I’ve often wondered why I didn’t stay in touch with the friends I’d made on Terrible Tuesday, kids with screen names like RowantheOdd, Dont_Fukkin_Judge_Me, name_name, and Mayo. By summer, we were calling each other by our real names. JesusFreak14 was Erica, and pink_killer_sheep was Bethany. As I went through 13-year-old jnnyfr48’s extant posts, I saw myself talking with the people I’d looked up to, joking and razzing “newbies.” And I remembered cautiously moving off the boards to AOL Instant Messenger with some of the others, thrilled every time I heard the new message sound.

I dove into an internet wormhole, trying to find my old friends.

Where are they now? Believe me, I have looked. I’ve Googled, searched social media. Nothing. I visit the board’s ruins on archive.org, digging for posts I haven’t already read.

Then, earlier this year, I decided to write about Terrible Tuesday. Fueled by a familiar obsessive energy, I dove into an internet wormhole, trying to find my old friends. The journey took me from Google to Pinterest to Twitter, where I found an internet stranger who looked about my age.

“Heyyyy!” I typed, then deleted the extra Ys and started over. “I’m a journalist writing an essay about a message board I used to post on decades ago & think you may have been a fellow poster.” I sent the tweet, sat on the couch and bit my nails.

A half hour later, she replied. I told her this was about Terrible Tuesday. “There was precisely one message board I would’ve been interested in talking about,” Bethany Halasz, once known as pink_killer_sheep, responded. “And that’s it. I’m honestly completely floored.”

We speak on Zoom. We’re both 33 now, with partners, pets, and jobs that would have sounded boring to us in 2001. She’s in Louisville, Kentucky; I’m in Gainesville, Florida. “I started with sheep because my initials spell BAH,” Bethany tells me. “And I wanted to make it kind of edgy, so I added ‘killer’ to it. And then I thought it was too dark. So I added ‘pink’ on top of it.”

I remember Bethany as conciliatory, extending kindness to Terrible Tuesday’s most outspoken conservative member, JesusFreak14, who rankled many of us. Bethany was religious, whereas most of us were atheists. I also remember her trying to help me come up with a new screen name when I grew to hate the unimaginative jnnyfr48. She has always stood out in my memory of the boards.

“I would have never in a million years have thought that someone would reach out to me.”

“I’ve thought about that message board so many times since,” Bethany tells me. I’m relieved it wasn’t just me. However, she doesn’t initially remember the constant, fiery debate that was at the core of my experience. Instead, she recalls how much it meant to her and the “really close friends” she made.

Bethany remembers exactly one of her posts, about how to get rid of hiccups. But the board helped change her views, too. In one of the AIM chat rooms, someone disclosed to Bethany that she’d had an abortion. It made something her Catholic school framed as an abstract moral wrong into a reality. “I think I just grew a lot,” she says. “I hope I did.”

We all took from Terrible Tuesday what we needed. For me, it was a way of navigating the post-9/11 world and dismantling the myth of American innocence — and differentiating myself from my conservative parents. Though in the age of Twitter, Terrible Tuesday seems quaint, it was my first leftist space of many to come (hi, Bernie Sanders’ Dank Meme Stash). And, like Bethany, I found a sense of belonging there.

I ask Bethany if she ever thought she’d talk about Terrible Tuesday again.

“No,” she says. “I’m glad that I did. But I would have never in a million years have thought that someone would reach out to me from it. And I am secretly hoping that this somehow reaches the other people that were on the board.”

I hope so, too. RowantheOdd, Dont_Fukkin_Judge_Me, JesusFreak14 — we know you’re out there. I’ll be here with my ancient AOL email account open (seriously), just hoping that a Terrible Tuesday 20-year reunion comes together. Needless to say, we have a lot to catch up on.