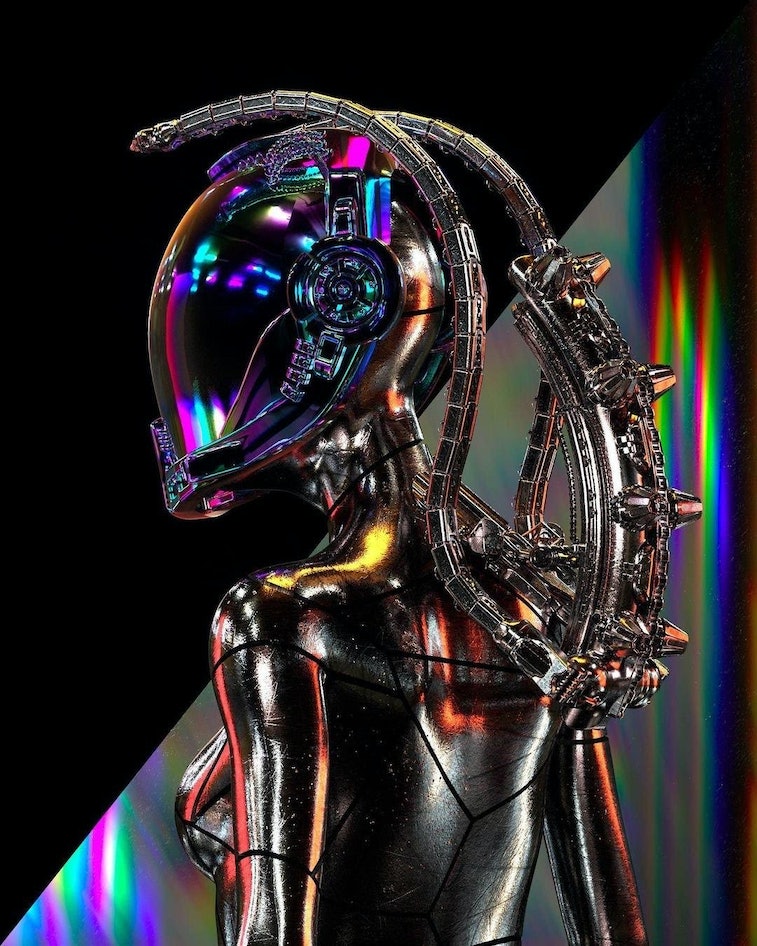 Superchief Gallery is opening what it calls the “world’s first physical NFT gallery space” in New York City’s Union Square on Thursday. In addition to physically exhibiting the artworks on 4K displays from hardware maker Blackdove which buyers can purchase for displaying their acquisitions, the exhibition is novel because the organizers claim it’s “carbon negative.”

The exhibition, called “Season 1 Start Pack,” includes NFT work from more than 300 artists (including the one above from artist Falreng), and will be available to view from March 25 to May 25 at 56 East 11th Street in Manhattan. With NFTs being the crypto-related topic du jour, something like this was only a matter of time. What’s remains to be seen is whether Superchief will be able to attract the sort of lavish spending that saw a work full of questionable material from artist Beeple controversially rake in over $69 million at a recent auction at Christie’s.

On rotation — The gallery will display five different artists’ work each day of the exhibition, and each artist will sell a one-off piece as an NFT via a 72-hour auction, with another editioned version of 72 sold via timed auctions thereafter. Some of the artists whose work is being shown are: Swoon, Ellen Sheidlin, 1010, Jason Ebayer, Ondrej Zunka, Princess Nokia, and Saturno.

“It is recommended that collectors prepare their crypto wallets in advance, but credit cards will be accepted as well,” the gallery says. Because while you may be wealthy and wanting in on the NFT action, you needn’t miss out because you don’t have your cryptocurrency ducks in a row.

Made for showing off — Superchief cofounder Ed Zipco says the gallery has, since it was founded in 2012, believed in the potential of digital art, and in ensuring artists receive their dues. He says NFTs represent “a watershed moment for the art world” because they create “a system of royalties for digital artists." Adding digital displays from Blackdove, meanwhile, makes it easier for collectors to display their purchases.

Carbon negative — The gallery has “carbon credit purchases built into the process of buying the NFT,” Ziipco says. “We decided to go further than carbon neutral,” he adds. The gallery is still finalizing its partner for that process, but is eyeing Cloverly, along with “a company in Reykjavik which has machines that pull carbon directly out of the air, as well as another that is focused on reforesting the Amazon.”

“Both the Blackdove digital canvases for the home collector and the artist’s NFTs in the curated exhibition will be available for purchase on-site via QR codes, so buying both in one visit to Superchief Gallery NFT is fluid and easy,” Zipco explains.

No line jumping — We asked Zipco if any of the work has been sold ahead of Thursday’s exhibition opening. “We have had offers,” he says. “NFT collectors are very informed on what’s going on in the market — but we are focused on making this rollout as smooth as possible and giving each artist time in the spotlight, so our focus is there right now.”

“For many of these artists, this is their first NFT, their Genesis piece. So it’s important to us that they do this special piece as a publicly accessible auction. With an auction, the entire NFT art collector base will have an opportunity to bid allowing the artists to get a true evaluation for their first foray into the NFT sphere.”