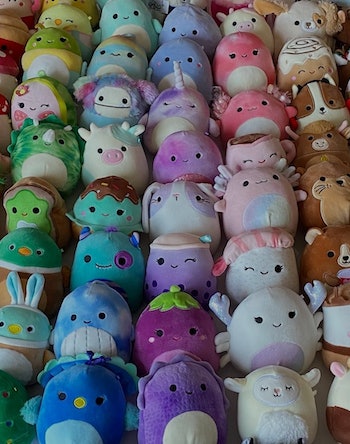 When Tabitha first discovered Squishmallows in February 2021, she thought she’d be able to earn some money from buying and selling the popular stuffed animal toys.

The 19-year-old college student, who lives in Chicago and studies film, had spotted videos of the brightly colored Squishmallows on TikTok, where to date the plush toys have racked up over four billion views across the hashtags #squishmallow and #squishmallows.

The toy line, launched in 2017, has gone crazy viral among children and adults alike over the past couple years, earning write-ups in outlets like the New York Times. In December, Jazwares, the parent company of Squishmallows creator Kellytoy, celebrated 100 million in sales. Given the hype around the adorable products, it wasn’t long till Tabitha got sucked in.

In the year that followed, Tabitha channeled her energy into collecting the toys, a hobby she found soothed her OCD. Although she sold many of the toys she acquired for a modest profit, her main passion was building up her own Squishmallow squad. Her collection soon ballooned to 50 Squishmallows, 30 of which now she keeps on her college dorm bed, much to the chagrin of her boyfriend.

But while Tabitha’s initial experience was as wholesome and fluffy as the toys themselves, it quickly soured as she became more involved in the Squishmallow online fandom, which is spread out over Discord, Reddit, TikTok, Instagram, and Facebook.

“I’ve seen people get fully doxxed online for reselling, and I’ve seen people post pictures of ‘shelf clearers’ at the store with their names and everything,” says Tabitha, who tells Input that the harassment of resellers is encouraged in online Squishmallow groups. (Input is withholding the last names of interviewees in this article for their privacy.) The situation is bad enough that Tabitha has given up reselling.

Alyssa, 29, is a pet caregiver from Utah who started her collection of 58 Squishmallows in 2019 after finding the hobby eased her anxiety. She’s old enough to realize that the Squishmallow fad is nothing new. “I remember my parents collecting Beanie Babies when I was little, and the craze of collecting is just the same as it was back then,” she says. “I’ve heard stories about people having the [Squishmallow] toys snatched out of their hands when they try to buy them. It’s horrific.”

Squishmallows often retail for under $20, but many collectors are willing to pay hundreds for the right toy. Which means big business for “shelf clearers” — “people who wake up really early and buy all of the popular Squish” to resell, according to Amelia, a 17-year-old collector from Alaska — and price gougers. “The Valentine’s Day Squishmallow Caedyn was sold [in store] at $14,” says Amelia, who has 23 Squishmallows, “but on [e-commerce platform] Mercari, I saw her being sold for $100.”

Tabitha says that hostility toward resellers “is honestly kind of frightening sometimes.” “I’ve seen resellers get absolutely smashed for adding a finder’s fee of $10 to their Squishmallow,” she says. “People are so scared now that they make up stories about how they got a Squish — pretending they got it from a cousin or something — just to avoid the backlash.”

The abuse and harassment can get severe in the Squishmallow community. “There was one reseller who’d bought up all the Squishmallows at a store, and a girl posted her picture to a local Facebook group,” Tabitha recalls. “Everyone started bullying the woman and attacking her over her weight in the comments, just because she’d bought some stuffed toys.”

TikTok is rife with examples of this sort of behavior. Vigilante Squishmallow fans will post videos and photos of shelf clearers, often with their names attached. In one instance, when a TikToker spoke about being “scammed” by a 15-year-old, she was encouraged by commenters to expose the minor’s identity. “These people are going feral over someone who’s buying all the stock of stuffed animals at the store,” says Tabitha.

Alicia, a 24-year-old Squishmallow collector and nursing home cook from Massachusetts, has also witnessed this sort of toxic behavior. “There was a large Facebook post where a serial scammer ended up getting doxxed after she tricked multiple people into exchanging Squishmallows with her,” says Alicia, who has more than 100 of the toys. “Since everyone had her information, they found out her husband was in the military. They called his higher-ups and got him demoted and punished, and multiple people filed criminal charges [against her] and harassed and threatened her family.”

Even worse, disgruntled buyers sometimes levy false accusations against sellers. “These [sellers] just wanted a reasonable price for the Squishmallow, and their accusers wanted to lowball them,” says Tabitha. “Then they put them on blast on Facebook and have all their friends bully them and call them a scammer, when they really didn’t do anything wrong.” You don’t have to search too hard to find desperate pleas from falsely accused folks, like this woman who received threats of IRL violence for simply shipping Squishmallows out too late.

Although Amelia acknowledges that these problems have spiraled out of control in recent months, she is far more concerned with the drama that comes from outside the community. “Bullying mostly comes from those who don’t collect,” she says. “They think adults shouldn’t have stuffed animals and they make fun of us for it.”

Amelia believes the benefits of the community far outweigh its problems. “Overall, it’s a very pleasant place,” she says. “It has its moments when people get anxious and worried about getting specific Squish, but I think the hype will die down eventually. Then the shelf clearers and price gougers won’t make a profit because no one will care that much anymore.”

Tabitha thinks that it’s going to take the collapse of the Squishmallow market to improve the overall situation. “I mean, you saw how Beanie Babies went. My parents have always brought up that one day these things won’t have value anymore,” she says. “I kind of like having [Squishmallows] regardless.”

The current atmosphere leaves her feeling exasperated though. “These are stuffed animals at the end of the day,” Tabitha says. “It’s ridiculous.”