“Companies... both large and small, have found themselves dependent on the arbitrary whim of these platform giants, one algorithm tweak away from ruin.” 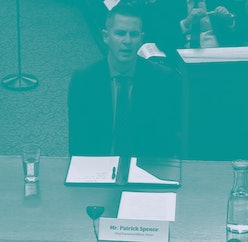 Small tech companies are revolting against the giants — and they’ve taken the fight to Congress. Four companies testified against Google, Amazon, and Apple to the House Judiciary’s antitrust subcommittee on Friday over their alleged “business-killing” practices. It follows a slew of recent lawsuits raised by the companies.

Keep them in check — The hearing and mounting anti-trust scrutiny could mean the ever-growing power of Big Tech is starting to deflate. It’s good to see smaller tech companies knowing their worth and fighting back against what's starting to look like a monopolistic machine — one which, quite frankly, has made our lives and data its cash cow.

In a statement on Friday, Chairman David Cicilline of the antitrust subcommittee argued that companies "both large and small, have found themselves dependent on the arbitrary whim of these platform giants, one algorithm tweak away from ruin."

“Because their decisions are largely unaccountable, opaque, and result in sweeping consequences, the dominant platforms effectively serve as private regulators," Cicilline said.

The beef (and there's a lot) – First there is Amazon. PopSockets was once a vendor on Amazon, selling on the marketplace for two years — but stopped after a dispute with Amazon over its products. In a lawsuit filed in 2019, the company claimed Amazon was damaging the brand with its selling of “defective, damaged and poor-quality” knock-offs of its product. The year before, Amazon was called out for the flagrance of counterfeit products sold on its platform.

PopSockets CEO David Barnett, who testified before lawmakers today, said prior to the hearing that in 2018 the company spent $7 million defending its patents and trademarks. He noted: “Hundreds, sometimes thousands would pop up in a day on eBay, Amazon. “We were probably losing every other sale to fakes.”

“Because their decisions are largely unaccountable, opaque, and result in sweeping consequences, the dominant platforms effectively serve as private regulators.”

Sonos, on the other hand, filed two lawsuits against Google regarding five patents on its speaker technology, according to reports from The New York Times. The company alleged Google copied its wireless speaker design following a 2013 partnership.

Sonos alleges continuous infringements followed, dating back to 2016 after Google’s launch of its Home smart speaker. The audio company also requested a sales ban of Google’s laptops, phones and speakers in the U.S. in an ITC complaint case. Google disputes the claims and, of course, has put on its boxing gloves to fight the lawsuits.

Tile vs. Apple — Rumors have surfaced that Apple is developing its own tracking device and Tile is not having it. The two were once partners of sorts; Apple carried Tile products in its stores and online. At one point, back in 2018, Apple worked with one of Tile’s engineers on incorporating Apple’s Siri into Tile’s product line-up. Last year, the company stopped selling its product in Apple Stores.

"Apple has not built a business model around knowing a customer's location or the location of their device," Fred Sainz, Apple's head of corporate communications, told The Washington Post.

How does Basecamp fit into all this? — Basecamp has grievances against Google’s advertising and search system. If you’ve ever done a search on Google, you've likely been bombarded with ads in the first couple of results. Oftentimes, that's not what you want. But, from a business standpoint, it gets even messier as Google allows competing companies to advertise keywords associated with their competitor for a bump up in ranking over what users are actually looking for.

“Google’s monopoly on internet search must be broken up for the sake of a fair marketplace.”

Google allows competitors to purchase ads on Basecamp’s trademark, and then blocks consumers from reaching its site, the company says. David Heinemeier Hansson, Basecamp’s co-founder spoke on the issue ahead of the hearing in an interview with Reuters, stating: "Google’s monopoly on internet search must be broken up for the sake of a fair marketplace.”

Basecamp has been forced to spend more than $70,000 annually in advertising campaigns, according to Hansson, to defend its trademark on Google.

Jose Castaneda, a spokesman for Google says when it comes to trademarked names it “balances the interests of both users and advertisers.” Castaneda further added that Google allows competitors to “bid on trademarked terms because it offers users more choice when they are searching.”